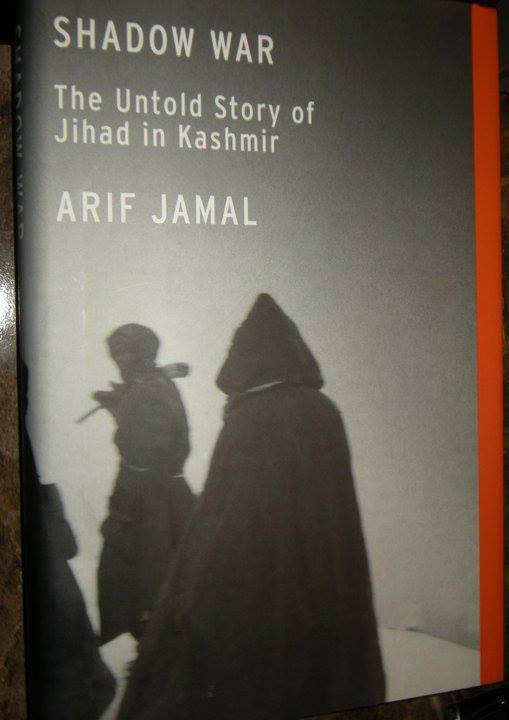 Arif Jamal is the author of the forthcoming book “Call for Transnational Jihad: Lashkar-e-Taiba 1985-2013.”  He is an author and journalist and a leading South Asia expert. He has been international faculty and a leading South Asia expert at the Harvard University and New York University. He has been a fellow at distinguished institutions including the World Press Institute, Macalster College, Minnesota, USA, and the University-College of London, UK.

In the last 15 years, Arif Jamal has written more than 350 investigative and interpretive articles, focusing on such subjects as Islamist politics in South Asia, jihad in Kashmir, Pakistan Army, madrassas and Afghanistan. Arif Jamal has authored and co-authored many books and studies. His book and studies include well-noted “SHADOW WAR: The Untold Story of Jihad in Kashmir.” Several years ago he nicknamed Imran Khan as Taliban Khan which instantly became popular.

Q. Your quote, on the recent murder of Major General Sanaullah of the Pakstan Army by the Deobandi Taliban, has gone viral on social media. Can we quote it here? Would you like to add to it?

Ans: Yes you can quote it in the intro, may be.

The following is taken from Arif Jamal’s Facebook Status of September 16th:

When you raise vipers in your backyard, they are bound to bite you. I remember this army officer giving me lectures on how great the Taliban are, and how he “ADVISED” me to stop criticizing those who do great service to Pakistan. I wish he can come back to life for an hour and give me the same lecture and advice. What a service the friends of Pakistan are doing to the country. Even his killing at the hands of the friends of Pakistan will not change the mindset that is bound to take Pakistan and some other countries to the stone age. I referring to a conversation that took place between us some 10 year ago. He was a colonel at that time. He is not the first general to have died at the hand of Muslim extremists. There was one Lt Gen as well. If an attack on the Naval base, on the GHQ, on Kamra air base etc etc etc etc could not change the mindset, an attack on a junior general won’t help. I am sorry you are wrong if you think so. I hope I am proved wrong…

“CLOSE THE JIHAD FACTORY AND STOP PRODUCING AND HARBORING JIHADIS AND CRIMINALS” This is all Pakistan needs. Pakistan does not need pompous 900-page counter terrorism strategy written by authors such as me. I still pray I am proved wrong.

Q. Some generals, serving and retired, are said to share the Taliban mindset. Others like General Alvi, a Shia general of a liberal bent was allegedly murdered by Ilyas Kashmiri, a former army commando. Would you care to elaborate?

Q- How has this come to this point?

This is the result of Pakistani military’s obsession with using jihad as an instrument of its defense and foreign policies since 1947, first against India and, later, against the former Soviet Union in Afghanistan. However, we see that more and more soldiers and military officers started converting from nationalist jihadists to Islamist jihadists after Pakistan army surrendered to India in 1971. The process became accelerated during and after the Afghan jihad. Unfortunately, this has been happening at an unprecedented speed since the 9/11 terrorist attacks.

Q. You wrote a detailed and well researched book, “Shadow War” on how the Pakistan Army trained the Deobandi and Wahhabi-Salafist Jihadis that were used as proxies in Kashmir. Please tell us more about it so that our readers can refer to your book?

Ans: The “Shadow War” is a detailed account of how Pakistani military used jihad as an instrument of its defense policy in Kashmir since 1947. I also show that General Ziaul Haq joined the Afghan jihad just to prepare a far bigger jihad in Kashmir. During this time the military and jihadi groups trained half a million jihadists to wage jihad in Kashmir and Afghanistan. The jihadists Pakistani military trained for Kashmir have come to haunt itself. Before 9/11, Ilyas Kashmiri was fighting jihad in Kashmir. His boys used to behead Indian soldiers and put their severed heads in Pakistan. Pakistani newspapers published the event on their front pages. He was Pakistan’s hero. Today he and his boys are severing the heads of Pakistani soldiers. It was the Lashkar-e-Taiba which founded the tradition of severing the heads Indian soldiers. In 1995, LeT commander Haibat Khan brought the severed head of an Indian soldier and it was put on display at the annual congregation of the Jamatud Dawah in Murideke. Mujallah Al-Dawa published the story in its December 1995 issue. Ilyas Kashmiri has spun out of the military control but the LeT/JuD has yet to spin out of their control. This is bound to happen, sooner or later. The day LeT spins out of their control, it would be the end of Pakistan as we know it…

Q: So that is the theme of your next forthcoming book?

Ans: Yes and more. My forthcoming book is a detailed history and profile of the LeT. It is an academic study which shows how big and global the monster has become and how dangerous it would be when it spins out of the ISI control. Unlike most Deobandi jihadi groups, the LeT is a truly global organization, with jihadi infrastructure and members in dozens of countries from Japan to the US. Al-Qaida was never a match for the LeT. The book covers both the ambitions and the growing capabilities of the LeT in the global context.

Ans-I have used mostly primary sources. For example, the Jamatud Dawa considers elections and democracy ‘kufr.’ Hafiz Saeed does not believe in Pakistan’s constitution. He believes Pakistan’s constitution is ‘batil’ which is a very harsh word. I have cited his speeches and writings on this in the Mujallah Al-Dawa and other JuD publications. He cannot deny that. It is unfortunate that nobody in Pakistan talks about the real discourse of the JuD because it is patronized by the Pakistani military. The JuD discourse and narrative is far more dangerous than al-Qaida and any Deobandi jihadist group. It is freely available in the JuD offices.

Q-You recently told BBC that the LeT has nearly half a million members. Are not you exaggerating?

Ans. No. I may be understating. According to a recent interview of Hafiz Saeed, some 49,000 students are enrolled in the al-Dawa schools which number more than 200. I presume as many if not more have graduated from these schools since 1993/94 when the first school was founded in Lahore. I have used such primary sources to calculate the number. The reality is that the JuD mouthpiece al-Dawa a few years ago claimed 2 million members. I present the documentary evidence such as this in the book. My estimate is only one quarter of the official claims.

Q. The line often taken in Pakistan by certain pro establishment journalists is that the army wants to take action against the Taliban but is not supported by the politicians. ANP and PPP are often blamed as well as PTI. Curiously, PML N is treated with kid gloves on this issue (it has been rebranded as “anti establishment). Is the army really following the elected politicians and that PML N.

Ans: Unfortunately, most politicians have surrendered to the military on the question of fighting against the Islamist radicals. The PPP tried to assert in the beginning but withdrew in the background within a few months after coming into power. Unfortunately, some of the PPP leaders have even tried to act as Taliban apologists. Unfortunately, the ANP also followed suit. The MQM was the only political party during the 2008-2013 period which kept opposing the Islamist radicals. The Sharif government has surrendered to the military and the Islamist radicals without even trying to fight. It is simply doing what the military tells them. Imran Khan is trying to create a space for the Taliban and Talibanization. He wrongly believes that they would let him rule the country as a reward. I think Pakistani society has become too radical. They voted for those who were soft on Islamist radicalism. Pakistani military does not trust the PPP, ANP and MQM. They like those who put up less resistance. It is quite clear that the Pakistani military is not ready to fight the jihadists they have created even if they have spun out of their control. But they want the politicians to take the blame. Sharif and Imran Khan doing the same.

Q. Pakistani media and intelligentsia often present the Taliban as a diverse collection of groups. In 2011, the Jinnah Institute published a Foreign Policy Elite report where the majority of those interviewed proposed that Mullah Omar’s Quetta Shura and Haqqani Network should be accommodated in the post-NATO Afghanistan in 2014. Are we seeing the fulfillment of this report unfolding before us?

Ans- Well.. that was what the Pakistani military desired. The report carried the views of those who reflect military’s worldview. I am not sure if that would happen. In the last 66 years, the jihad in Kashmir and jihad in Afghanistan have backfired. Pakistan is paying the price for waging jihad in the neighboring countries. We have repeatedly seen that jihadists frequently spin out of control. In addition to destroying the country, Pakistani military is undoing itself by following this policy. The latest evidence came in the form of Major General Sanauullah. Pakistani soldiers and generals will keep dying at the hands of the jihadists they create. I think the jihadists will be able to kill Pakistani military officers and generals many times more in the coming years. I hope I am proved wrong. But that is hoping against hope. 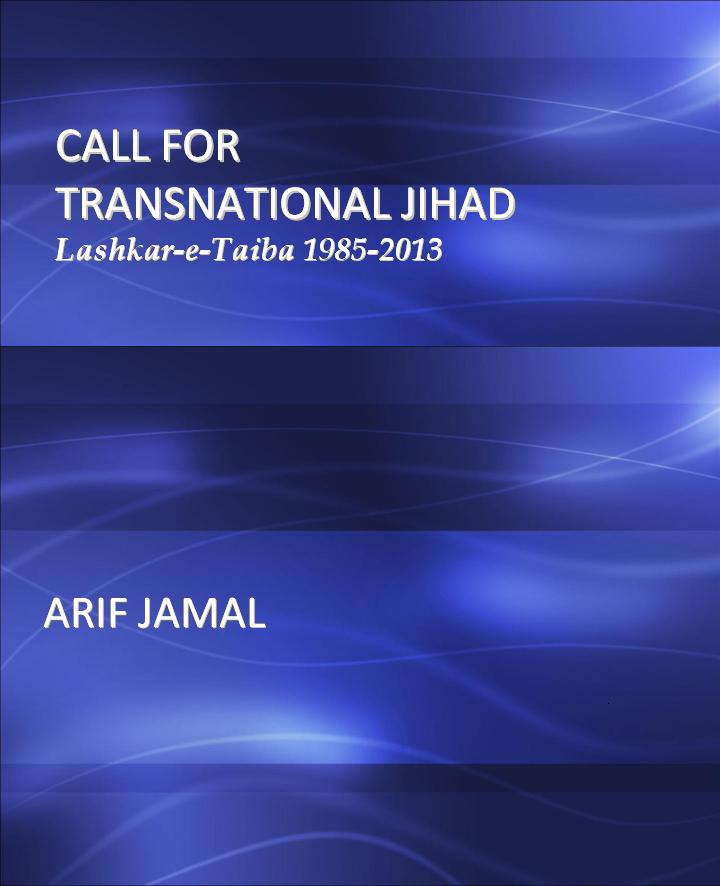