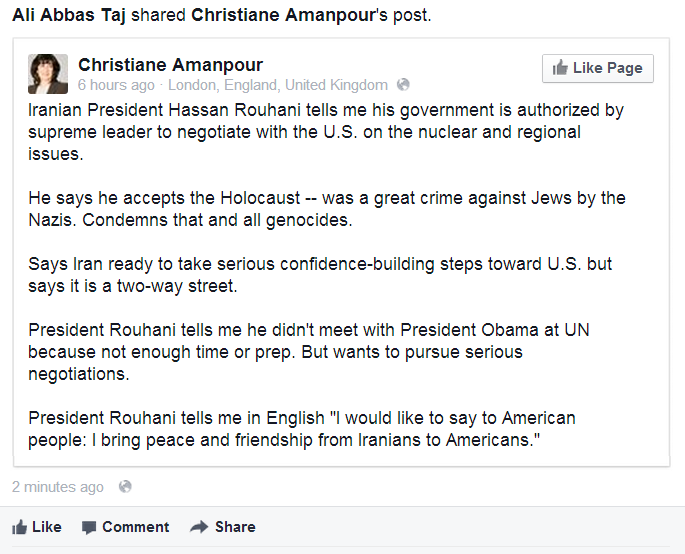 In their respective speeches at the UN both President Obama And President Roohani had a coordinated message:

1. We shall have friendship based on mutual respect.

2. Iran shall not build a nuclear weapon.

3. Iran has the right to acquire nuclear technology for peaceful purposes.

This is a major shift in the United States stance towards Iran. Formally President Bush had a clear doctrine that Iran did not need any kind of nuclear technology because it has too much natural gas for energy.  This is welcome thaw in relations and we hope a path to a long term friendship with the Muslim world based on principles rather than the master slave relationships of previous eras. President Obama must be given credit for this bold move indeed he is trying to full fill his campaign promise to talk to Iran. Obama seems to have a positive vision of a future of dialogue.  Writing is on the wall for the tin pot dictators and oppressive monarchies of the Gulf.

In the post World War era most negotiations and demarcations of the Muslim world were done by superpowers. Britain after the first War and America after the second War. The Muslim world clearly feels that their true voice has never been taken into account. An Iran lead Muslim voice will ensure a fair shake on the resolution of complex issues that have been smoldering for decades such as the Israel Palestinian issue. The Muslim world or the Arab Street will feel empowered that in Iran they have a tough negotiator with their interests at heart. This can only be a healthy development.

The coordinated speeches by Obama and Roohani are the result of behind the scenes efforts by skilled diplomats on both sides. A shout out to Javed Zarif who came to the States a week ahead of the United Nations Summit. The foreign minister of Iran is scheduled to have more detailed talks with Secretary Kerry in the next few days. These talks will be historic and are likely to see restoration of diplomatic relations between Iran and United States.  The indications for this can be seen in the Roohani’s interview Christiane Amanpour where we are told that a possible meeting between Obama and Roohani was contemplated. Obviously discussions are moving at a fast pace and restoration of diplomatic ties seems to be the inevitable end result.

Encouraging words from the saner elements of the Israeli Press confirm we are on a brighter more peaceful path:

The new wind blowing out of Iran is not immune from criticism. For example, conservatives attacked Zarif for using Facebook and Twitter to conduct “Holocaust and Jewish new year diplomacy.” Zarif explained in an interview to the conservative Tansim website that his comments on the Holocaust are a response to a tweet written by Christine Pelosi, the daughter of Nancy Pelosi, the minority leader of the U.S. House of Representatives. She wrote: “Thanks. The new year would be even sweeter if you would end Iran’s Holocaust denial, sir.” Zarif responded, saying: “Iran never denied it. The man who was perceived to be denying it is now gone. Happy New Year.”