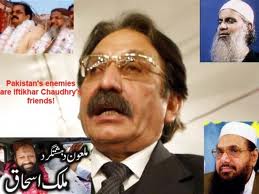 It was Monday, the afternoon of 16th July, 2013 when I spoke with a friend of mine belonging to the Hazara Shia community of Quetta, he told me that Chief Justice of Pakistan was in Quetta and he has ordered to removal of all barriers and check posts from Hazara Town. He was worried about the security of his family and community that has been one of the worst victims of atrocities being committed by Lashkar e Jhangvi, a terrorist group notorious for killing Shia Muslims in Pakistan, this group killed more than 200 Hazaras have been killed in bombings this year alone, more than 1300 Hazaras were killed in Quetta during the past decade and the only reason behind their killings was that they hailed from the Shiite Muslim sect.

Thousands of Hazaras have fled to Australia and Europe in order to save themselves from being mercilessly killed by the terrorists of Lashkar e Jhangvi. Keeping in the view the past events, the Hazaras felt insecure and considered the arrangements made by the government inadequate, so they set up a voluntary force that would guard the town and for this purpose they established check posts and barriers in the town as well. These arrangements pointed at the failure of the state in providing fundamental rights to its citizens as according to the Article 9 of the Constitution of Pakistan:

But in reality, we have a community under seige in Quetta, that like many Shia Muslims in Pakistan is being attacked for its beliefs, talking of beliefs, the very same constitution in Article 20 (a) says:

“ Every citizen shall have the right to profess, practice, and propagate his religion “

Now that definitely means that every citizen, regardless of his beliefs is allowed to profess and practice them and no one can take away this right, this article of the constitution preaches tolerance and acceptance, despite this, Shia Muslims are being murdered on daily basis in Pakistan, murder itself is a crime punishable with death according to the laws of Pakistan but since the Hazaras couldn’t see the law protecting them, they decided to guard themselves.  This arrangement actually bore fruits when a suicide bomber was shot dead by these volunteers in the end of July this year.

It is an open secret that the federal government doesn’t want to go after terrorists, just 3 weeks ago, the Chief Minister of Balochistan requested the Prime Minister for co-operation in its operation against Lashkar e Jhangvi, the federal government not only refused to co-operate but also forbade the Balochistan government from taking any action against Lashkar e Jhangvi. This is the state of law and order in Pakistan, the Prime Minister is not willing to act against them, his party’s ties with this group are no secret either.

The Shias of Pakistan in general and the Hazaras of Quetta in particular are hopeless that their murderers would ever be caught, prosecuted and punished, they have actually lost faith in the criminal justice system, the Chief Justice of Pakistan, who represents a pillar of the state snatches  away a right from an already persecuted group and orders that they should not be allowed to establish check posts or install barriers in their area, I would like to ask Mr. Chief Justice  that since it is their area and only they live there, why would someone else ever want to go there ? So if you would make an excuse that these check posts and barriers cause inconvenience to visitors then may I know who is having hurdles in visiting that area, my guess is Lashkar e Jhangvi,  whose leader is a chum buddy of CJ’s cousin Rana Sanaullah, the Senior Minister of the Province of Punjab, a very senior leader on the Pakistan Muslim League Nawaz (PMLN). Now that pretty much explains the whole situation.

Since the Chief Justice ordered the removal of check posts and barriers from Hazara town, Quetta,  I would like to request him to first kindly order the removal of all barriers and checkposts from Islamabad since they cause a lot of inconvenience to thousands of citizens who visit the city on daily basis, and yes I would also like to request him to order the removal of all check posts from the Constitutional Avenue and the Red Zone, that too causes inconvenience to a good number of citizens, Mr. Chief Justice, charity begins at home, if you find this country so safe, then why don’t you give up your own security first and then order others to remove the check posts that they have set up for their security since the police and paramilitary troops are too busy protecting VVIPS like you.

I would also like to remind Mr. Chief Justice that it is you, who is the protector of fundamental rights of the citizens of Pakistan, it is you, who has to take action against infringement of rights of any citizen and it is you who has to make sure that everyone gets his rights, Sir! I request you to kindly do your job sincerely, if you have any problem in interpreting the constitution which of course is your job, I would be glad to assist you sir, let me tell you that when the state fails to protect the rights of its citizens, the state has no moral authority to tell those citizens to abide by the law, but we are still abiding by the laws of the state, but if you would instead of enforcing our rights, place restrictions upon us while we are trying to protect ourselves on our own while staying within the parameters set by the laws of the state despite paying taxes to a state that doesn’t even guarantee us our right to life, that would definitely be quite unjust of you Sir, I would also like to remind you that you are the custodian of this fundamental right of ours and it has been infringed since long but you haven’t even shown a little concern on this issue, why should I not interpret this silence of yours into your complicity in this crime against us?

I would like to inform you sir that we have had enough, it’s about time you started doing your job and dispensed justice and protected our rights and if you are unable to do so then please admit your failure and go home, you, who keeps on giving contempt notices to others should stop insulting the very office of the Chief Justice of Pakistan by holding on to it when you can’t dispense justice and safeguard the rights of the citizens of Pakistan.

In the end, I would like to inform you that, we have lost faith in you sir, we have left our fate in the hands of Almighty Allah who is the supreme judge and we will hold you accountable in His court for you were given the duty to dispense justice but you didn’t.