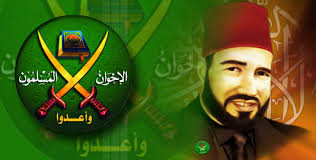 The Muslim Brotherhood is the largest Islamist party in the world today.  It also claims to be a democratic party.  In this article I will be looking at its founder Hasan al-Banna, the reasons why he established the Muslim Brotherhood and his Nazi sympathies. Hasan al-Banna was born in 1906 to a poor family in Southern Egypt.  During his teenage years he took part in demonstrations against British Rule. He later went on to become a school teacher and in 1928 founded the ‘The Muslim Brotherhood’ (MB), the world’s largest Islamist group. Although the end of the Ottoman Empire was brought about by Turkish secular Muslims, some Muslims, like Banna, blamed “the West” and thus he established the MB with the aim of creating an Islamist State in direct antithesis to western ideals.  Banna was able to recruit from a large cross-section of Egyptian society by manipulating issues such as social inequality, public health and the growing conflict in Palestine.  Banna claimed his group would solve all these problems and thereby resurrect lost Arab glories. According to Banna, the Ottomans and every other non-Arab Muslim power had not properly understood Islam.  Banna lists this as one of the reasons why these Muslim empires failed in the past:

The transfer of authority to non-Arabs: Persians at one time, at another, the Mamluks, Turks and others who had never had the genuine taste of Islam, and whose hearts had never been illuminated with the light of the Qur’an because of the difficulty they encountered in trying to grasp its concepts, even though they read the words of Allah (swt)… (Between Yesterday and Today by Hasan al-Banna, Pg 5, Prelude Ltd, 1997)

This is a strange statement considering that the Ottoman Muftis had been giving fatwas to Muslims around the world for over 500 years.  It was also under the Ottoman Turks that Muslim power reached its zenith.  But none of this mattered to Banna, as far as he was concerned only his party had the correct political model. Banna also believed in the compulsory nature of aggressive jihad:

All Muslims must make jihad –Jihad is an obligation from Allah on every Muslim and cannot be ignored or evaded. (The Way of Jihad by Hassan al-Banna, Pg 2)

But Banna preferred to fight the Jihad once the MB had wrested state power from all rivals:

It is Fard (obligatory) on us to fight with our enemies.  The Imam must send a military expedition to the Dar al-Harb (land of war) every year at least once or twice, and the people must support him in this (The Way of Jihad by Hassan al-Banna, Pg 8, Prelude Ltd, 1997)

To get to power Banna was even prepared to ally with the likes of the Nazis. Banna’s ideology and the Nazi ideology were quite similar.  The Nazis wanted to create an expansionist empire with a Fuhrer at its head; Banna wanted a Caliphate with a religious leader at its head.  In the 30s and 40s the MB worked tirelessly to propagate Nazi propaganda in the Middle East. Members of the MB translated Hitler’s book ‘Mein Kampf’ into Arabic, calling it ‘My jihad’ and they also propagated the notorious anti-Semitic forgery ‘The Protocols of the Elders of Zion’. At the outbreak of WW2 Banna also appealed to Nazi Germany for help in fighting against the British backed monarchy in Egypt.  MB even helped spy on the movement of British troops for the Nazis.  The Nazi party’s ascent to power through exploiting democratic means inspired Banna to similarly use democracy as a tool to take power.  The best known Nazi sympathiser in the Muslim brotherhood was Banna’s friend Hajj al-Amin Housseni who worked to propagate Nazi propaganda. Housseni, the Grand Mufti of Jerusalem, instigated riots against the Jews in 1929 (which destroyed the 3000-year old Jewish community in Hebron) and again in 1936 before visiting Nazi Germany in 1941. The founder of Hizb ut-Tahrir (HT) Taqiuddin al-Nabhani , who, prior to establishing HT was involved with the MB, also associated with Housseni. Another prominent member of the Muslim brotherhood was Syed Qutb.  Qutb’s books, especially ‘Milestones’ and ‘Social Justice in Islam’ played a key part in formulating Islamism’s violent ideology.  Qutb also wrote an essay called “Our struggle against the Jews” in which he condemns the Jews as being the root of all evil.  Although he was executed in1966, his works continue to be a source of inspiration for militant Islamist movements like al-Qaeda. Members of the Muslim Brotherhood assassinated the prime minister of Egypt in 1948 and, in the following year, Hasan al-Banna himself was assassinated, it is rumoured by the Egyptian intelligence services. His MB movement is today the largest Islamist party in the world and its offshoots, from Hamas to the Muslim Association of Britain, are active around the globe.  Hamas also distribute literature such as ‘The Protocols of the Elders of Zion’ and also encourage the killing of all Jews.  The founding charter of Hamas not only makes reference to ‘The Protocols of the Elders of Zion’ but it calls for the destruction of the State of Israel with which Hamas states that it can never have permanent peace. However just as the Nazis did, Hamas is prepared to use democracy as a tactic to get to power. Hasan al-Banna was an anti-Semitic bigot who supported Nazism.  His Muslim Brotherhood movement remains true to those ideas today.

This entry was posted in Antisemitism, History, Islamism, Your View and tagged Hasan al-Banna, Muslim Brotherhood, Syed Qutb. Bookmark the permalink. Trackbacks are closed, but you can post a comment.
Source :
http://www.spittoon.org/archives/2388