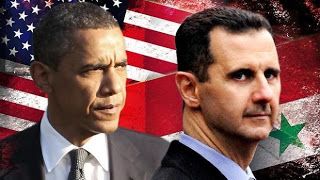 Avoiding single-factor explanations and taking into account Obama’s personal ambitions, one can see self-aggrandisement attempts in his decision to seek congressional approval for strike on Syria. As regards al-Assad, he may very well emerge victorious in the long-run.

Much has already been said about Obama’s decision to seek Congress approval for launching a limited strike on Syria. The Syrian rebels have labelled Obama as a “weak president” for this decision. The Syrian Deputy Foreign Minister Faisal Miqdad has said that Obama’s statement of seeking approval from Congress was full of hesitation and confusion. Moreover, according to Syrian Arab News Agency, Syria’s permanent representative to the UN, Bashar al-Jaafari has said that the USA and Britain decided to seek approval for the strike because they needed a way out after they had beaten the drums of war. According to Jaafari, the two leaders had “climbed to the top of the tree and don’t know how to get down”.

Anyone who has been following the Syria crisis closely can understand that the warnings issued by Syria, Russia and Iran, and the Syrian army’s level of preparedness and determination, all have played a role in making the USA back off from immediate strike on Syria.
But there is more to it. The notion that Syria and its allies alone have made Obama to back off from the strike would be a single-factor explanation, an approach that can prove fatal in any political analysis. Therefore, it is needed to take into account other factors as well. One such factor is Obama’s set of values and personal aims. Is Obama genuinely a warmonger?
One view can be that Obama truly and genuinely does not like war and therefore wants to avoid military conflict with Syria. This would suggest that Obama has been bluffing all along and in his last speech which was carefully drafted to avoid the wrath of the powerful hawkish lobbies in the USA. Now he looks to Congress to come to his rescue and help him in face-saving. This would be a rather naïve way of looking at things. Obama’s tenure in the office has marked the war on Libya and is tainted with the ever-increasing drone attacks in Pakistan, Yemen and Somalia.
The other view can be that Obama is in fact a warmonger but very much occupied with the idea of self-exaltation. Obama is not going to be re-elected but he wants to look peace-loving and more democratic compared to his predecessor George W. Bush. Thus, Obama faces the ultimate dilemma of appearing tough, yet maintaining the image of a president who came up with the slogan of “change”; not to mention that he is also a Nobel Peace Prize Laureate, an award that is perhaps the most controversial decision in the entire history of the prize. Obama must be having career options for the time after he is no more in the White House.

In any case, Obama now has a week or so for sorting things out, looking better while actually being no different than George W. Bush, and garnering support within Congress to back his decision. Obama has got some time. But so has al-Assad.

Regardless of the real reason for Obama’s decision, a few indicators point in the direction of victories for al-Assad. The very fact that the USA backed-off from striking Syria after having beaten the drums of war for several days is a victory for al-Assad in itself, at least for now. What is more is that al-Assad seems to be appearing victorious even in the long-run provided that things do not get out of control.
Until the congressional vote takes place, the Syrian government has the opportunity to organise itself even more, reshuffle and move its assets to places beyond the reach of potential strikes and to take measures that would minimise the damage to its assets. In a worse scenario, a limited strike lasting for a couple of days will result in damage to its military assets on a limited scale.
Obama’s plans do not involve a regime change whatsoever. He has been explicit that there will be no ‘’boots on the ground’’ either. However, Obama has vowed to continue supporting the rebels, a decision which is much criticised around the world as the rebels are Al-Qaida affiliated, not to mention that some of them are cannibals too.
Despite a full backing by the USA and its allies to the rebels, the Syrian army has been winning over the rebels for more than two years. With al-Assad not going anywhere and when the limited strikes are all over, the Syrian army will continue the course of regaining the country from the hands of the terrorists, most of the country already being under the control of the Syrian government.
This of course is based on the assumption that a limited strike does not turn into a fully-fledged war. A limited strike can be read as a gesture by a superpower that needs to show its adversaries that it has “done something” against a state that has crossed the “red line” defined by the USA.
But will Syria or its allies retaliate and if they do what will be the extent? Well, no one knows for sure. But a retaliatory response may not be necessary given the prevalent circumstances in the region and considering long-term benefits for Syria if it does not retaliate. After all, Syria has already been hit by Israel three times this year and there was no significant military response by Syria. Sometimes, one has to accept minimum damage in the short-term in favour of a larger gain in the long-term.
If Syria does not make a significant retaliation, especially not the one involving Israel, the maximum damage it would have to bear will be impairment to some of its military equipment. Regrettably so, loss of human lives will be unavoidable but the blame of that will rest mainly on the USA and it will further deteriorate its already degrading reputation among nations of the world.
However, impairing of the military equipment will not have any serious effect on the Syrian government’s campaign against the terrorists, especially when they will continue to have access to Russian military equipment, assistance from Hezbollah and backing by Iran.
It won’t be a surprise if everything returns to “normal” in Syria after the limited strikes are over.
However, there is a remote possibility that Congress will not approve the war and Obama too will change his mind. This would not wash away the stains of drone attacks and the Libya war from Mr. Obama’s hands but nevertheless help him achieve some degree of self-aggrandisement, albeit with repercussions in the form of pressures from the “hawks” at home and allies abroad.
The worst-case scenario is the ultimate nightmare of all people of wisdom and of which Iran’s Supreme Leader Ayatollah Ali Khamenei has warned the West several times. There always is a risk for things to escalate and get out of control. If so does happen, no party will be emerging as victorious.  Humanity will lose and the history will remember Obama as a warmonger occupied with the thought of self-aggrandisement and pursuing his parochial interests.
Writer’s biography
Dr. Rehan Naqvi (also known as Nakvisson) is a freelance journalist from Norway. He worked for several years in the oil and gas industry before he quit the corporate world and started working as a journalist. He has a PhD degree in Energy Engineering from Norwegian University of Science and Technology, and a diploma in Multimedia Journalism from University of Nordland. He is currently pursuing a Graduate Diploma in International Relations at the London School of Economics and Political Science.
Source :
http://nakvisson.blogspot.no/2013/09/obamas-self-aggrandisement-efforts-and.html