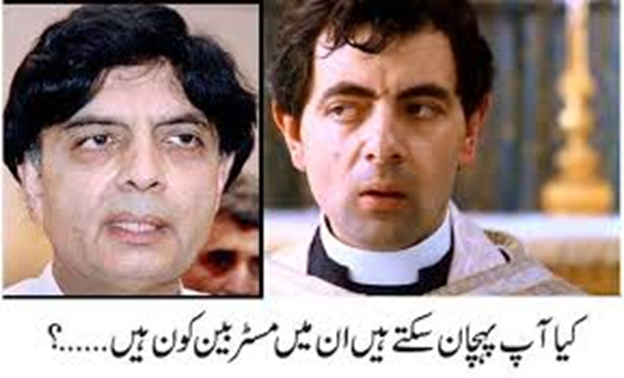 On the evening of 13 August, just a few hours from the 66th anniversary of Pakistan, Chaudhry Nisar held a nationally televised press conference in which he explained his government’s plans on how to tackle “militancy” in Pakistan. Yes, “militancy” is the word. Since Taliban do not like to be characterized in terms “terrorism,” Nisar was careful not to use the word. The press conference was full of clichés and inanities such as asking the media men to guide the government to formulate the so-called anti-militancy policy. These clichés etc., are not the focus of this article. What is the focus of attention is that once again a PML-N leader obfuscated the ongoing Shia genocide in Pakistan.

“It hurts me,’ said Nisar, “when Shias, Wahabis, or Deobandis are killed.”

No journalist present at the press conference asked Chaudhry Nisar to name a single Wahabi or Deobandi killed as a result of terrorism in Pakistan. On the contrary, the number of the Shias and Sufi Sunnis (brelvi) killed at the hands of the Takfiri Deobandis—allies of the PML-N—has so far killed twenty -two thousand Shias and about the same number of non Shia (mostly Sunni Sufi or Brelvis) in Pakistan. Hardly a day passes when a Shia is not killed somewhere in Pakistan. Being the interior minister of Pakistan, it is Nisar’s legal and constitutional responsibility to protect Pakistanis, Shias included. But he has spectacularly failed in his duty.

Nisar has done what the likes of Imran Khan, the Sharif Brothers, and the pro-Saudi media in Pakistan has been doing for the past decade. Nisar’s heart-rending statement about the non-existent Deobandi and Wahabi martyrs will certainly win nods of admiration from Saudi Arabia and the ISI. He will be cheered on by the likes of Shahbaz Sharif who proudly claim Taliban to be their brethren. But he has amply shown that he is as much a failure as an interior minister as he is dishonest as a human being. The Shias of Pakistan continue to be cut down only because the likes of Chaudhry Nisar refuse to accept that there is such a thing as Shia genocide.