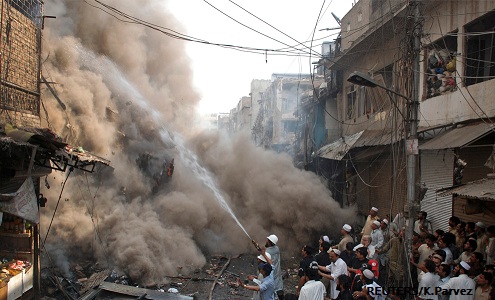 A scene from Gabriel Garcia Marquez’s Nobel Prize winning novel, One Hundred Years of Solitude, has vaguely remained my memory for a long time. The scene is about a gun battle  in 1967 between liberals and conservatives in Macondo city. The conservatives, being in power, have all the state resources to construct and disseminate propaganda. Leader and commander of the liberal force gets seriously injured and is left dying in pool of blood, perceived as dead after his force is defeated. Early next morning when the Colonel comes to consciousness, he is taken aback by the fact that there are no traces of a ferocious gun battle in the main square of the city. While moving to his house, he keeps asking about the gun battle last night but nobody in the city seems to be aware of the incident. The Colonel, severely injured, wishes to lose his memory but of no avail while on the other hand people around him start doubting him to have lost his mind . The people of the town keep arguing with each other regarding the claims of the Colonel while the Colonel himself starts showing signs of abnormality. The era in the novel seems to depict political and ideological wars in 17th and 18th Century Europe.

Since then , states around the globe have achieved sophisticated techniques to monopolize construction and dissemination of political and security narratives. The narratives mostly pertain to the prolonging of political arrangements to keep wielding, using and distributing power.

The events in Khyber Pakhtunkhwa, a north western province of Pakistan, and Federally Administered Tribal Areas of Pakistan (FATA) in the last three weeks provide an interesting case study as to how narratives are constructed, used, and disseminated through media that sideline the issues having direct bearing on the common masses.

On July 26 2013, twin blasts in Parachinar (Headquarters of Kurrum Agency) left almost 57 dead and 167 critically injured1.The locals on the other day expressed their emotions:

Hussain said almost all the dead and wounded were Shias. Moreover, Ali said at the time of the explosion the market was full of Shias, who were buying items for their evening meal that breaks the daytime fast during the holy month of Ramazan. ”We demand protection. We request the government to take action against those who routinely kill our people,” he told The Associated Press. One of the blasts was carried out by a suicide bomber while the other might have been a planted one, Political Agent Riaz Mehsud said.[2]

Target killing of Peace Committees, police officials and Shias has remained a routine matter in the meanwhile. On August 2, two policemen and a House Station Officer (SHO) were shot dead in Daudzai in the suburbs of Peshawar.[3] A member of the Peace Committee was shot dead in Kabal Tehsil of Swat distrct on July 24 2013.[4] These are just two of the dozens acts of target killings that continue in Peshawar and other parts of Khyber Pakhtunkhwa unabattedly.

These unfortunate events would have been considered as part of the war the militant network has launched against the state and society of Pakistan, especially Khyber Pakhtunkhwa and FATA, had both the state and private electronic and print media of Pakistan not melted the story through other high profile stories that have little or no direct bearing on the citizens. Let me count the events that were hyped by media in the meanwhile which intentionally or unintentionally sidelined the terror events mentioned above.

A controversy on presidential election that was destined to be won by PML-N made banner headlines in print media and occupied more than 70% of time in electronic media which successfully marginalized killings in Parachinar.

After section of media started reporting target killings, news of the resignation of the Chief Election Commissioner of Pakistan started doing the rounds. The stories of target killings thus relegated to cold storage by mainstream media.

As if it were not enough, when media started analyzing various aspects of the DI Khan jailbreak, another high profile issue occupied almost the whole space of print and electronic media. Supreme Court of Pakistan issued a show cause notice to Chairman Pakistan Tehreek-e-Insaf (PTI), Imran Khan. This issue successfully engaged print media, electronic media and social media in a way unprecedented in this part of the world.

Is it demand of the consumers for a story as some media exponents would argue or depiction of a stark reality of the political economy of Pakistan? Is it information, education and entertainment as classical journalism envisages or monopoly on construction, distribution and dissemination of narratives that are related to power? Does this phenomenon indicate thirst for information by the common masses or does this signify hold of power by the political, corporate, and military and intelligence elite and urban middle classes in the state structures of Pakistan?

Academia in this part of the world has so far failed to analyze the above questions that have close relationship with the political economy of the state of Pakistan for three reasons besides lethargy. Firstly, most of the academia that resides in the urban centers has a share in the monopoly of the narratives and hence has some share in the hold of power by the elite and urban middle classes. Secondly, the overbearing state institutions on the one hand and the militant network on the other hand have successfully permeated fear with respect to evidence based analysis that might lead to a difference of opinion with respect to popular narratives. Thirdly, socio-cultural space for the dissenting narratives has been reduced to the extent that academia might not lay its hands on something that might touch the boundaries of non-conformism.