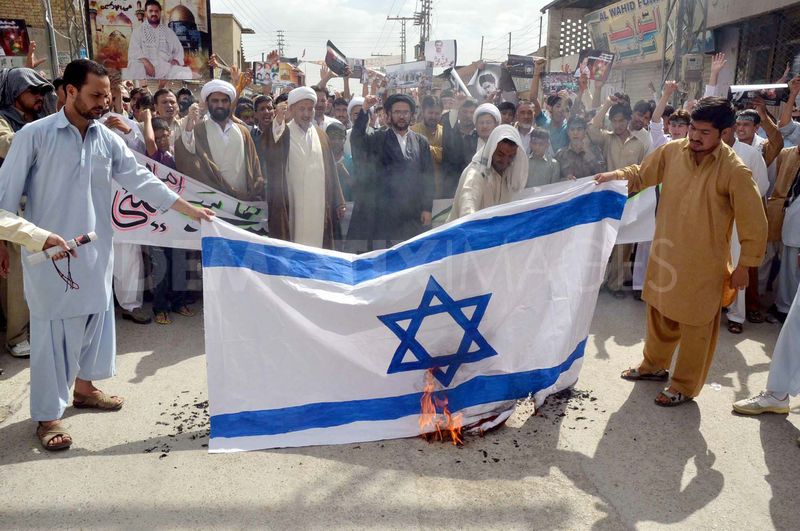 Related post: It’s all about power: Al-Quds Day a celebration of hatred and racism – by Michael Coren

In campaigning for human rights, it is important to avoid being selective or unbalanced. It is equally important to ensure that activism is based on principles and not political agendas that can be hijacked.

In principle, one can and should support the rights of the Palestinians to their State in accordance with various UN resolutions and regulations. It is justifiable to critisize the Israeli State for flouting these UN resolutions just as it is justifiable to condemn, without any ifs and buts, the violent and suicide bombing tactics of the increasingly Wahhabi-influenced Hamas militants against Israeli and Palestinian civilians. The world would be a better place if this situation is resolved peacefully and both Israel and Palestine can coexist side by side and respectful of the other’s sovereignty.

For Pakistan’s Shia Muslims, to risk hundreds of lives annually to participate in the Al Quds rally in the month of Ramzan (Ramadan) makes no sense whatsover. This rally is primarily an Iranian initiative to show the rest of the world that Shia Muslims are as loyal to the Ummah as Sunni and Wahhabi-Salafi Muslims and even more so. It is a subconscious reaction to the increasing Wahhabi-Salafi presense in Muslim communities worldwide. As Shia Muslims face increasing terror, violence and persecution from Wahabi and Deobandi fanatics in Pakistan, Iraq, Syria and other countries, the Al Quds rally is their way of showing that they are loyal to causes that have resonance amongst the so called Muslim Ummah.

Guess what, its not working anymore!

No matter how many Al Quds rallies Shia Muslims of Pakistan organize, they will continue to be demonized and murdered by Saudi Wahhabi funded Deobandi militants. No matter how much Shia Muslims support the Palestinian cause, it will not be taken into consideration by Hamas. On the contrary, Hamas has now openly allied itself with Al Qaeda aka Jabhat Al Nusra and the Saudi-funded Free Syrian Army in massacring Shias, Sunni Sufi and Christians in Iraq and Syria. Before the current manufactured crisis in Syria, Hamas had already shown its true colours. Its policies were always extreme and violent and its anti-Shia sentiment was obvious when Hamas restricted Muharram Ashura processions in Gaza.

Should Shia Muslims continue to support the same Hamas that does not even consider them Muslims, the same Hamas that is now taking an active part in Shia and Sunni Sufi massacres in Syria with its open alliance with Al Qaeda, Jabhat Al Nursa and the organ-eating Free Syrian Army?

As an embattled faith community, Shia Muslims must be clear on the crisis facing them. It is correct to critisize the US congress, Israel’s Netanyahou Government and the EU for supporting Al Qaeda in Syria and Iraq. But it is dishonet to stop there and not mention the role of Saudi Arabia, Gulf States and Hamas. It is equally dishonest to blame Israel for massacre of Shias and Sunni Sufis in Pakistan while remaining completely silent on Takfiri Deobandi identity of terrorists who have killed more than 22,000 Shias in Pakistan.

Also it is a fact that often these Al Quds rallies and slogans in support of Palestinians degenerate into distasteful anti-semitism against Jews and blanket condemnation of all Christians. Violation of human rights in the name of a human rights cause is not only insane but also hypocritical.

By participating in the Al Quds rally (Youm Al Quds), Shia Muslims are protesting in favour of those Hamas militants who have no such feelings for the endangered plight of Shias, Sunni Sufis, Christians and Jews. Moreover, their participation in these rallies is being misused by psuedo-liberal Pakistani intelligensia to paint all Shias as Iranian fifth columnists. Such fake liberals who usually remain silent or obfuscate Shia genocide by Deobandi militants actively avail the opportunity to bash and ridicule Shias portraying them as an irrational and violent community. After every Shia massacre, the fake liberals of Pakistan work overtime in promoting the false Iran-Saudi Proxy war binary to dilute the outrage on the ongoing Shia Genocide at the hands of Deobandi militants. Of course Shia genocide by Takfiri Deobandi militants is neither Sunni vs Shia sectarian violence nor it can be described as an outocme of the fictitious Iran-Saudi proxy war. Takfiri Deobandis who have killed thousands of Shias in Pakistan have also killed thousands of Sunni Sufis/Barelvis, Ahmadis, Christians and other communities. Moreover, there’s no evidence of indiscriminate anti-Sunni violence by Pakistani Shias or Iran.

It is, therfore, important that Pakistan’s Shia Muslims indepenently chalk out their domestic and foreign policies and agendas. Only by maintainng their unique South Asian cultural and faith identity, Shia Muslims may disprove false allegations and stereotypes promoted by the closet Shia haters. They may also save time and resources to pay attention to more urgent issues which currently face Shias, moderate Sunnis, Ahmadis and Christians of Pakistan, i.e., the issues of counter-terrorism, awareness, and resistance to genocide.

About the author: Fatima Rajput is a proud Pakistani Shia Muslim and a cultural critic based in Islamabad.