Home  »  Original Articles   »   It’s all about power: Al-Quds Day a celebration of hatred and racism – by Michael Coren 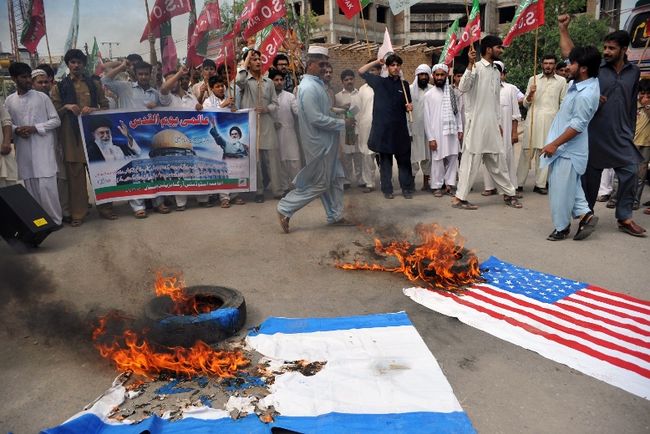 Pakistani Shiite Muslims shout slogans beside a burning Israeli flag during a rally against Israel and the United States to mark the Al-Quds (Jerusalem) day on the last Friday of the holiest month of Ramadan in Peshawar on August 17, 2012. (AFP/HASHAM AHMED)

Related post: Why Al-Quds rallies by Pakistani Shias are anything but productive – by Fatima Rajput

Beyond the hatred, the racism and the anger, there’s a certain irony surrounding Al-Quds Day (Youm-Al-Quds), commemorated this weekend internationally (Iran, Pakistan, Lebanon etc) and to its shame — in Toronto (Canada).

The event was founded by the Ayatollah Khomeini, and is an overwhelmingly Shiite Islam event. In Pakistan, Sunni Islamist partie (e.g., Jamaat-e-Islami) too support this event, albeit only verbally. Anybody who knows Islam will understand that the Shiites are despised in most of the majority Sunni world. They were treated as second-class citizens in Lebanon, they are murdered in Pakistan, they are thought as being, golly, even worse than the Jews in Syria, and there aren’t any in Egypt because Saladin killed them all.

According to a recent Pew survey, Shias are considered non-Muslims by large segments of Sunnis in Sunni majority countries. For example, only 50 percent Sunnis in Pakistan accept Shias as Muslims. Only 50 percent Sunnis in Pakistan accept Shias as Muslims – Pew Survey
So spare me the lies and propaganda about Islamic brotherhood, Ummah, and the fraternity of Muslim believers. You have not seen genuine hatred if you haven’t seen how Muslim sect treats Muslim sect. And you’ll see a lot more of it when President Assad falls, and his fellow Alawites, a version of Shiite Islam, are likely slaughtered like cattle. Not unlike how Shias are being treated by Sunni-Salafi monarchies in Bahrain and Saudi Arabia.

While this sordid event can take place in Canada, it would likely be banned or violently suppressed in most Muslim countries. Believe me, it’s not about Jews; it’s about power, and the psychotic inability of international Muslim leadership to tolerate anybody who does not agree with the established position.

The epicentre of Al-Quds Day is Iran, where homosexuals are publicly executed, women stoned to death, dissidents gang-raped and then murdered, the Holocaust denied, and violent statement issued and violence financed.

Tehran is the model that many of the people at the centre of this protest admire and would like to see replicated everywhere.

They couldn’t give a damn about the Palestinians, and see their plight as another way to extend their own ideology. Good Lord, some of them even pretend to be Iranian when they’re not. I interviewed one of the Al-Quds Day organizers some years ago, and knew him to be Pakistani. He lied to my face, because being Iranian is apparently way sexier in the Islamic fanatic community.

This is notwithstanding the fact that Palestinians are almost 100% Sunnis, many of them, particularly those in Hamas camp, consider Shias as infidels and a deviant sect of Islam.

Majority of Sunnis in Saudi Arabia, Palestine, Egypt don’t give a damn to at least 19,000 Shias killed in what may be described as a slow motion genocide in Pakistan.

The state of Shia Muslims of Parachinar, a small enclave containing a million Shias in Parachinar area of tribal agencies of Pakistan is much worse than Gaza or West Bank. The area remains surrounded by Taliban and Al Qaeda militants sponsored by Pakistan army. Why no Parachinar-Day? Why no such decree by Ayatollahs in Iran to save Pakistani Shias from genocide at the hands of radical Sunni groups? Why no Stop Shia Genocide Day?

So this is not about Islamic fraternity or free speech at all. Freedom is sacred, but it is not the same as license. All civilized people condemn public pleas for violence and genocide, which is what will be heard at the demonstration if they are in any way similar to past gatherings, and judging by activists’ e-mails that have already been circulated.

There may well also be Hezbollah flags flown. At least the color of some flags in Pakistani Shiite procession is brigh yellow, reminiscent of Hezbollah. This group is illegal in Canada and is also playing a central role in the Syrian civil war in which US, UK, Iran, Saudi Arabia are equally involved.

A lot of mainstream Arabs and supporters of Palestine are uncomfortable with this gruesome display, but too many politicians, especially Liberal ones, seem to measure morality by votes.

It’s not whether something is wrong or not, but how many people might support the party if a stand is taken.

Disagreeing or criticizing policies or actions of Israel or USA is a different thing. Using the occasion to burn national flags, spread xeonphobia and anti-semitism and glorify violence cannot be appreciated.