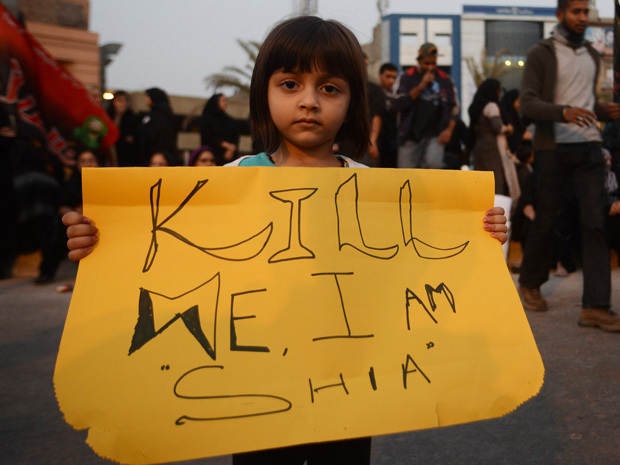 Attacks against the Shia Muslims of Pakistan are now so frequent and so normal that they are seen in run rate terms.

There has been an attack by the Taliban (a Deobandi militant group also operating as Sipah Sahaba or Ahle Sunnat Wal Jamaat ASWJ) every day for the past five months in the frontier province, the report said. The Deobandi militants have also gone after the army and the government as well as after moderate Sunnis (Barelvis), Ahmadis and Christians, but local Shias remain a special target.

In Balochistan, Shias have been hunted down by Deobandi militants (ASWJ and Taliban) with such frequency that their killing does not even make it to the front pages. I have been writing columns in Pakistani papers for years, and I have noticed the casual manner in which these deaths are reported. Often, they involve the stopping of buses and the execution one after the other of all Shia passengers. These Shias of Balochistan are easy to identify because many of them are Hazaras, a community with Mongol ancestry.

In January, more than 120 of them were killed after a suicide bomber detonated himself in a snooker hall in Quetta. Cruelly, a bomb was then set off in an ambulance to also go after the rescuers.

In Pakistan’s largest city Karachi, a bomb killed 48 Shias in March. The targeting of the community is possible because it has separate mosques and unique religious processions. There is some segregation of Shias in Pakistani cities, just as Muslims live apart in India.

Since 1980s, the demand by Deobandi clerics and militants (Sipah Sahaba ASWJ and other affiliated groups) has been that the Shias be apostatised. Mohammad Fayyaz, a Deobandi candidate of ASWJ in this year’s election from Karachi told the BBC: “We don’t want to murder Shias. We want them to be declared non-Muslim in the National Assembly. That is what we’re working towards.”

Why are the Shias of Pakistan so hated? One reason has to do with Pakistan’s use of militias against India and in Afghanistan. According to Saudi Wahhabi and Pakistani Deobandi ideology, Shias are infidels, non-Muslims. In almost all areas of Pakistan, the Shia killers are from the Lashkar-e-Jhangvi (a militant front for Deobandi Sipah Sahaba ASWJ), drawn from the same cadre as the Jaish-e-Mohammad. In Pakistan and Afghanistan, Deobandi militants (Taliban, ASWJ, JeM) have worked as Jihadist sectarian proxies of Saudi Wahhabis.

The promotion of these Deobandi (ASWJ) and Wahhabi (Lashkar-e-Taiba) militant groups by the State has meant that their ideology has also come to be seen as acceptable. And so the army and ISI are to blame.

The other reason, the main one, is actually the fault of politicians. Pakistani law emphasises religious and sectarian division. This can be directly attributed to Jinnah’s politics, and the actions of his lieutenants.

Pakistan’s constitution discriminates against Hindus, Sikhs and Christians, who are banned from holding high office. In the 1960s, President Ayub Khan wrote the law that barred non-Muslims from becoming president.

After him, in the 1970s, Zulfikar Ali Bhutto banned non-Muslims from becoming prime minister. Bhutto also constitutionally apostatised the Ahmedis, who are forbidden religious freedom.

And then, under President Zia-ul-Haq, came the turn of the Shias. This was done in 1980 through altering the penal code. A law was introduced that criminalised anything said against ‘any of the righteous caliphs (Khulafa-e-Rashideen) or companions (Sahaaba) of the Holy Prophet description for a term which may extend to three years, or with fine, or with both’.

Now the Shia belief is that the only rightful successor to the prophet was his son-in-law Ali. They consider the other caliphs not righteous, as the law demands they do, but as usurpers. And so the introduction of this law made the practise of Shia doctrine a crime.

When the state itself discriminates in this manner, it is not surprising that society has gone the way it has. The constant emphasis on inclusion, which India’s founding fathers wisely stressed, has no parallel in Pakistan.

The ideological state insists on purity, and it should not surprise us that the state in Pakistan has begun to eat its own. The remarkable thing is that Jinnah, himself a Shia, did not know this and believed, or at least maintained, that Pakistan would be a pluralist society despite its founding along communal lines.

Today it is no longer accepted in Pakistan that he even thought this. A famous speech he made four days before Partition assuring all Pakistanis equality is lost and there is no audio record of it.

Six months after Jinnah’s death, his picked successors took the logic of Partition ahead and declared that ‘sovereignty over the entire universe belongs to Allah Almighty alone’.

They promised democracy, freedom, equality, tolerance and social justice, but ‘as enunciated by Islam’. Minorities were given ‘adequate provision’ to ‘freely profess and practise their religions’. Zia arbitrarily removed the word ‘freely’ and its status in the constitution is now uncertain.

Today, Pakistan is the most violent place on earth and the victims of the terrorist violence in it are Muslims. The violence has become normalised and its levels and frequency no longer draw out any change in thinking, or any real alarm, in the government, civil society or the media. According to an estimate, more than 22,000 Shia Muslims have been killed in Pakistan in last few decades in what is described as a slow motion genocide.

Pakistanis often write that despite the predictions of doom, their nation is surviving. They are wrong to anticipate it as a big event. The collapse of the Pakistani state is happening not with a bang, unless it is the bang of the suicide bomber. It is coming with a slow, boring repetition.

Aakar Patel is a former Gujarati newspaper editor and a columnist for Mint.