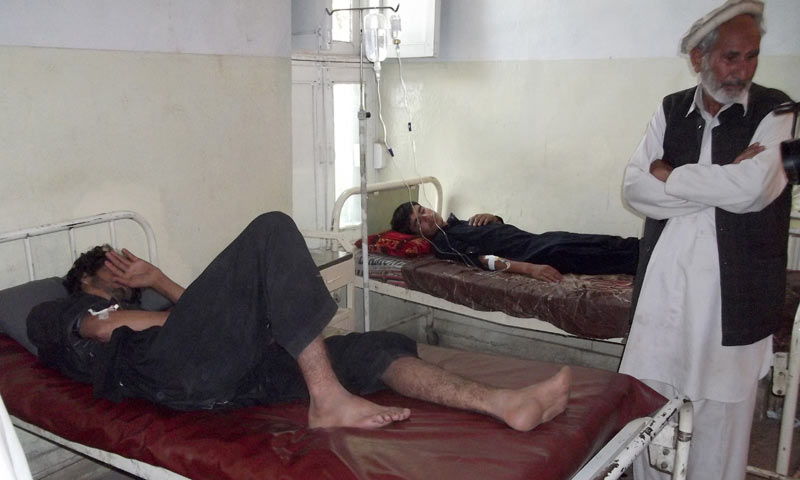 Parachinar witnessed another bloody day when over 75 Shias were killed, another 180 wounded, by the Takfiri Deobandi terrorists of Sipah-e Sahaba Taliban (currently operating as Ahl-e Sunnat Wal Jamat ASWJ, led by Ahmed Ludhianvi Deobandi). Two hours before Iftar (fast break), this massacre in holy month of Ramzan was met with indifference and silence on Pakistani media and streets. While hospitals in Parachinar were barely able to treat the victims who had sustained severe injuries, the ambulances taking injured victims to the nearby cities were ambushed, killing scores , wounding dozens.

Kurram Agency was cut off from Pakistan for five years, starting from 2007 to 2012, when the Deobandi Taliban militants besieged it. Pakistan army stood by while half a million Shias were subject to violence and persecution by the Deobandi Sipah-e Sahaba Taliban. Media being sympathetic to Sipah-e Sahaba Taliban portrayed the Shia Genocide in the town as a tribal conflict involving two different tribes. (Ironically, media persons describe Shia genocide in Kurram as a tribal confict, in Quetta as Hazara ethnic issue, in Karachi as Sunni-Shia violence etc). A segment of the same media called it sectarian violence in another vile attempt to project it as tit-for-tat Sunni-Shia killings. This narrative hides the fact that in addition to muder of 21,000 Shias, Deobandi terrorists (ASWJ, LeJ, Taliban) have also killed thousands of moderate Sunnis, Ahmadis and Christians in Pakistan. As obfuscation was systematically engineered, Shia population faced progrom with Arab, Chechen, Uzbek and local fighters poured on Parachinar to carry out the genocide. All this while, the local Kurrami Shias fought bravely to deal with the Deobandi onslaught. By the end of the siege, thousands of Shias were killed, thousands others injured. Schools remained closed, hospital staff vanished and medical equipments unavailable. Tragically, those crying hoarse on Gaza did not do anything to even highlight this genocidal siege.

No part of Pakistan is now safe from the ongoing Shia Genocide and murder of moderate Sunnis by Deobandi terrorissts of the Sipah-e Sahaba Taliban (ASWJ). However, the siege of Parachinar, which is termed Pakistan’s Gaza by international media, is the worst form of violence ever witnessed in the country so far. Shias had to travel all the way from Afghanistan to Parachinar, taking 36 to 48 hours of traveling. They endangered their lives to undertake this journey while Pakistan army was nowhere to be seen. Scores were kidnapped, slaughtered in this journey too. If this was not complicity, one wonders what was.

Complicity in Shia Genocide is manifesting itself now in the form of media and civil society’s silence. Since the multiple blasts took place, social and electronic media indulged in trivialities, covering unimportant and Punjab-specific issues; i.e presidential elections, load-shedding, and transport problems in Punjab. Talk Show hosts like Hamid Mir, Nasim Zara, Najam Sethi, Raza Rumi, Fahd Hussain, Javed Chauhdry, Kamran Shahid, Kamran Khan did not dedicate even a minute to this massacre. Both right-wing Islamists and so called “liberals” are silent. Twitter which is abuzz when Taher Shah is invited to Amir Liaqat’s program did not see even a single tweet from the proactive tweeples on the Kurram massacre. The entire focus of these media personalities is to somehow obfuscate the issue and others remain conveniently quiet. Some even go to the extent of humanizing Sipah-e Sahaba Taliban terrorists by interviewing them for their blogs, magazines and newspapers (e.g. TFT blog owned by Najam Sethi, edited by Raza Rumi). Sadly some Shias continue to engage with and promote those ‘fake’ libeal editors who in turn continue to engage with and promote ASWJ terrorists.

There is no denial that Shia Genocide is enabled by the complicity of state institutions. But equally big role is that of media. The Taliban-sympathetic media, the Taliban-idealizing social media will only obfuscate the pogrom while Shias will continue to suffer. Only a few persecuted Sunni Barelvis, Ahmedis, Christians, Balochs raise their voice against Shia Genocide. Those quiet now are complicit too. And once the Deobandi terrorists (Taliban, ASWJ) get the upper hand, those silent will face what the Shias are going through right now. Meanwhile, the world needs to turn its focus to Pakistan and take concrete steps to make the state act against the Shia Genocide.

News clip: Deobandi terrorists (Sipah Sahaba Taliban) own up the attack on innocent Shia Muslims of Parachinar, express their intent to kill all Shia Muslims of Pakistan, falsely present themselves as Sunni Muslims, and falsely implicate Pakistani Shias in events taking place in Syria and Iraq (where, as a matter of fact, Al Qaeda affilaited Deobandi and Wahhabi terrorists are busy in slaughtering secualr Sunni, Shia and Christian communities). (Source)