Home  »  Featured • Original Articles   »   Undermining democracy: In May, it was the Taliban and now it is the Supreme Court – by Mahpara Qalandar 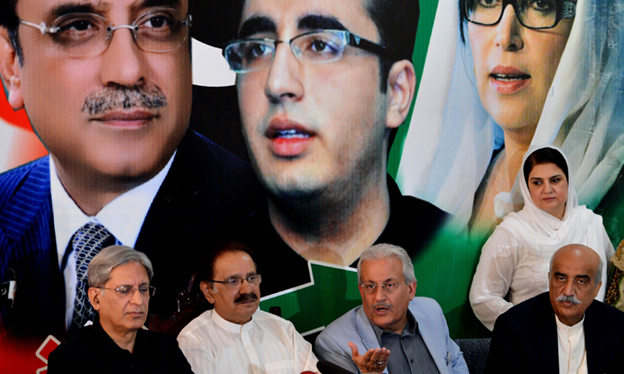 The Pakistan People’s Party (PPP) has decided to boycott the forthcoming presidential election. Its candidate Raza Rabbani will not be now running against PML-N’s Mamnoon Hussain. Here are the circumstances which led to the boycott:

1. The presidential election was supposed to be held on 6 August as per the announcement of the Pakistan Election Commission.

2. Since Nawaz Sharif spends the last ten days of Ramzan in Saudi Arabia, the PML-N filed an application with the Commission requesting that election date be changed. The application actually said that since many legislators would be in Saudi Arabia performing umra at the time of election, a new date be given.

3. The Pakistan Election Commission rejected the PML-N application because it did not see any merit in it.

4. The PML-N went to the Supreme Court against the decision of the Election Commission. The Supreme Court immediately accepted the application and set the new date which the PML-N had asked for.

5. The Supreme Court did not listen to other parties whose candidates were also contesting.

7. The PPP view is that the new date does not give it enough time to campaign for its candidate. Raza Rabbani said that new date does not make sense logistically as the candidates are expected to stay in Islamabad till the scrutiny is over, visit all the provincial assemblies to ask for votes once free and then return to Islamabad to cast their vote.

Now that Raza Rabbani is out, the PML-N candidate is sure to win over the rest of the candidates who are at best light weights, indeed very light weight. Within the short period of three months, history has repeated itself. For the May elections, the Taliban did not allow the PPP, the ANP, and the MQM to campaign for their candidates. These parties did not stage a single public rally to campaign for votes. On the contrary, the PNL-N and the PTI were given a free hand to hold public rallies and they took full advantage of it. This time, the evil, anti-democratic role of the Taliban was taken by the Supreme Court headed by Iftikhar Chaudhry.  The Supreme Court has given the presidential victory to the PML-N on a plate just like the Taliban gave parliamentary victory to the PML-N and the PTI in May.

In the Taliban/Supreme Court worldview, democracy is good only when their parties and candidates win.