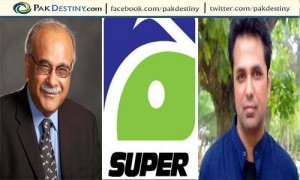 Tax-defaulter Sethi, allegedly rewarded for his ‘services in elections’ for the PML-N in his capacity as caretaker Punjab chief minister, has also violated the Supreme Court’s orders by making illegal appointments in the PCB.

Talat Hussain, in Muhammad Malik’s talk show on Dunya TV on Wednesday (18 July 2013), called for condemnation of ‘black sheep’ in the journalism profession.

“Najam Sethi is holding PCB acting chairman charge and also doing a program on Geo TV. The Geo TV has its sports channel, Geo Super,” Hussain said. “So what he will do is clear to everyone.”

Sethi, however, feels no shame by ignoring the conflict of interest, despite criticism from public and journalistic circles.

He has been advised to either continue doing the service of Sharifs by clinging on to the PCB chairman post or stick to his shabby journalism by doing his talk show on Geo TV and op-eds in notorious The Friday Times blog.