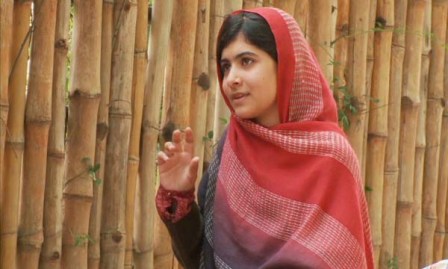 Editors note: We are cross posting a courageous letter to the Taliban by Mohammed Hanif. Mr. Hanif should delve deeper into why the religious nut bags shoot a child in the face and then wish to leave it to Allah. This question must be addressed. I have touched on these issues in this article
https://lubpak.com/archives/274551

In short for 1400 years Muslims were ruled by oppressive kings that essentially shot children in the face and then used the same argument endorsed by their paid Mullah to escape justice. This is exactly what is happening now. Leaving it to Allah.

I am writing to you in my personal capacity. This may not be the opinion of the people of Pakistan or the policy of the government, but I write to thank you in response to the generous letter you have written to Malala Yousafzai. Thanks for owning up that your comrades tried to kill her by shooting her in the head. Many of your well-wishers in Pakistan had been claiming the Taliban wouldn’t attack a minor girl. They were of the opinion that Malala had shot herself in order to become a celebrity and get a UK visa. Women, as we know, will go to any lengths to get what they want. So thanks for saying that a 14-year-old girl was the Taliban’s foe. And if she rolls out the old cliche that the pen is mightier than sword, she must face the sword and find it for herself.

Like you, there are others who are still not sure whether it was “Islamically correct or wrong”, or whether she deserved to be “killed or not”, but then you go on to suggest that we leave it to Allah.

There are a lot of people in Pakistan, some of them not even Muslims, who, when faced with difficult choices or everyday hardships, say let’s leave it to Allah. Sometimes it’s the only solace for the helpless. But most people don’t say leave it to Allah after shooting a kid in the face. The whole point of leaving it to Allah is that He is a better judge than any human being, and there are matters that are beyond our comprehension – maybe even beyond your favourite writer Bertrand Russell’s comprehension.

Allow me to make another small theological point – again about girls. Before the advent of Islam, before the prophet gave us the holy book that you want Malala to learn again, in the times we call jahilia, people used to bury their newborn daughters. They probably found them annoying and thought it better to get rid of them before they learned to speak. We are told Islam came to put an end to such horrendous practices. If 1,400 years later, we have to shoot girls in the head in an attempt to shut them up, someone like Russell might say we haven’t made much progress.

Like you, I did a bit of research in Malala’s hometown in Swat valley, and I remember a wise journalist warning your commanders that the Taliban might get away with slitting people’s throats in public squares but not to try shutting down the girls’ school. The government practically handed over the valley to your comrades, but their rule didn’t even last for a few weeks because they ordered all women to stay home.

There was only one lesson to be learned: you can fight the Pakistani army; you can try and almost kill Pakistan’s commander-in-chief, as you so heroically did; you might wage a glorious jihad against brutal imperial forces. But you can’t pick a fight with the working women in your neighbourhood and hope to win. Those women may never get an audience at the UN but everyone – from cotton picker to bank teller – cannot be asked to shut up and stay home, for the simple reason that they won’t.

It has also been suggested that your letter represents the mainstream opinion in Pakistan. But don’t fall for this praise. You might think that a lot of people support your just fight, but there is a part of them that worries whether their girl will get the grades to get into a good university. And if you tell them there is a contradiction there, they might tell you to leave it to Allah.

I’m not sure if such frank language is appreciated in the Taliban’s shura, but I’m sure, with your linguistic skills, you can phrase it better. I have a feeling that, like it or not, our women will kick arse.

Yes, we have heard all your arguments about how they are a weaker sex, they can’t be in the workplace because they are impure five days a month, and if they are good wives they are pregnant nine months a year; but whenever I look around I have this sinking feeling that they are going to kick arse. Mine and yours.

Don’t believe me? You may have seen the propaganda pictures of female pilots released by your former employer, Pakistan’s air force. Some of them have started to fly fighter aircraft. Like you, I’m of the firm belief no good has ever come out of the Pakistani army’s misadventures. But just think of the day when one of those female pilots decides to not leave it to Allah.
http://www.guardian.co.uk/commentisfree/2013/jul/18/letter-taliban-leader-malala-yousafzai-girls