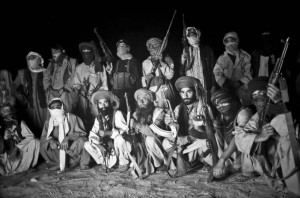 It is not uncommon to come across an amalgam of politicians, analysts and journalists on national media posing and answering such vexing questions as what is happening in Balochistan and  who is fueling the current unrest in Balochistan.

Before we delve any deeper, notice the second question is “who” not “what” is fueling the current unrest.  As it is quite evident apart from a few brave and honorable exceptions, nobody in the national media dares to put forth the “what” in their last question.

This last question is simplistic yet devised with the same sophistication and devious intent as that now famous query “why do they hate us”?

It is quite clear the object of both these questions is not to answer anything in particular rather to shut off certain undesirable avenues of inquiry.  Hence for a simplistic question comes an answer which sooths and yet at the same time stirs the collective patriotic soul,   “the foreign hand.”

This query and its neat little answer washes away the history of the struggle in Balochistan, its complex nature, with clamorous moments dotting the long quiescent years and now the ever increasing brutality.  But as one ponders over the exasperating answer, this usual cause of all our national ills, it suddenly becomes clear that at least in the case of Balochistan it is true.

From the perspective of the Baloch one must ask,

2)  Was it not a foreign power that took an oath on the Quran and offered amnesty and a negotiated settlement to a belligerent chieftain, but instead reneged, hanged his son and  companions.  The aging Mir Nauroz Khan died in Kohlu prison.

3)  The general who on national television warned the entire Baloch population that “they [Baloch] won’t even know what hit them” which foreign army was the general commanding.

5)  To what country these agencies belong, which  the Supreme court of Pakistan holds responsible for abducting, torturing, killing and dumping mutilated bodies of Baloch activists.

6)  Was it an Indian Army officer who allegedly raped a female physician in Sui, and was it Manmohan Singh or Karzai who declared him innocent without a trial.

7)  What foreign powers were responsible for Akhtar Mengal’s exile, his imprisonment, the humiliation he suffered brought in a cage and in chains in front of a judge.

8)  Which foreign power is responsible for thousands of  missing Baloch.

9)  Which foreign power is responsible for the ruthless bombing and burning of Baloch villages.

Questions are many and no matter how you phrase them, the answer is always the same.

Geographical constructs of an erstwhile colonial power may form a country but they do not forge a nation, although many Pakistanis may think themselves one nation but  to the Baloch they  appear the same as  the Firang appeared to middle easterners at large and to the indians in particular, Occupiers .   The Baloch have a culture, language, worldview truly distinct from the rest of Pakistan.  The Ideology of Pakistan as the bastion of Islam maybe dear to the rest of Pakistan, to the mostly secular Baloch it appears and with good reason a clear threat to their fragile culture and by extension to them as a distinct people.  No one can or should attempt to hold back the intermingling of people and cultures, which brings forward new ways of life, but to foresee that your language and culture will not survive beyond the next one or two generations is unbearably painful.  This bleak and agonizing future is what the Baloch see.

In conclusion  the Pakistani state is in this fight for the geostrategic, proven and unproven mineral resources of this arid land.  The Baloch are in it for an intangible treasure, their IDENTITY.   So to you, Dear Reader a simple question – Should the fight go on ?