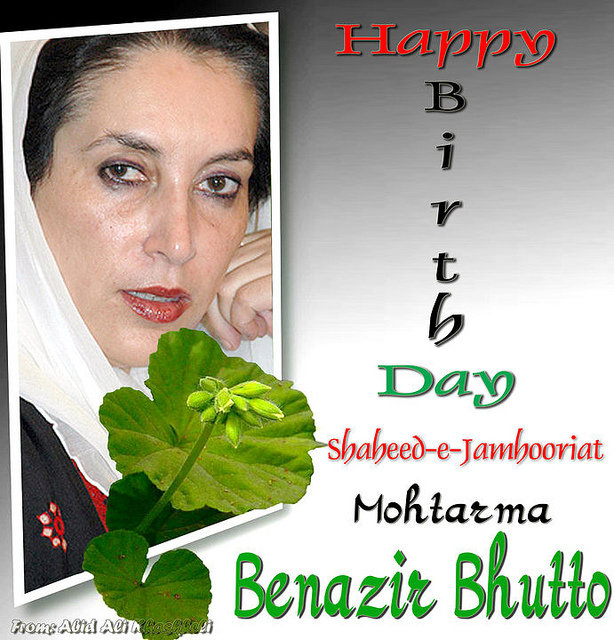 Writing these lines on the 60th birthday of a legendary leader Benazir Bhutto I feel very nostalgic as remembering so many events which had passed in front of my eyes in the political history of Pakistan. It  is true that the political history wouldn’t be completed by the great sacrifices of the Bhutto family in general and Benazir Bhutto in particular for the masses of this country.

As a great writer Plekhanov mentioned a role of an individual in the history and how can I forget a remarkable line when Mohtarma said that now she will quit politics and will take care of her children, then Ted Grant a legendary Marxist writer said ,(No Mohtarma you cannot do this for long and you will have to return in politics and you will have to return for the hopes of the masses and the history will take work from you).This is called an historical urge and in the case of Bhutto’s it fits with their political destiny.

We still remember that just at the age of 26 while she was meeting and seeing her great father Mr. Bhutto last time in prison she was told about her political destination and the lessons of the history by her great father. I believe that her political travel begins at that time and the period of countering her started when Mr. Bhutto was hanged on 4th April, 1977 by the brutal Zia. In her book Reconciliation she had shared the dark days faced by her in prison. Zia and his affiliates had tried all their brutality to crush her and the party but history was preparing other lessons at that moment. We had witnessed a welcome by more than a million people in 1986 and then again a huge and historical welcome of a Women leader in the world history ever by more than 3 million people on the streets of Karachi.

She was martyred on the same day but it came to an end on 27th December , 2007.The forced which she had highlighted in her life took the revenge not from her only but also from the masses of this country by killing their hopes, their dreams, their all high spirits for a better Pakistan. Mohtarma always used to say that what wrong I had done if I say that we will fight against the forces of darkness, against the brutalities of Islamic fanaticism, against the all forces that want to take us in the medieval dark era.

I indeed salute to a great leader and indeed the nation misses you. It’s a high time for the party to re evolve itself on the fundamental revolutionary and ideologically basis. They should work according the guidelines of Bhutto sb and Mohtarma. The  party has to return on its ideological ground in which its clearly written that We have to build a classless society on the basis of Socialism. The party can never run from Socialism and the time is here for them to adopt their ideological and fundamental ideas.

SALUTE TO A GREAT AND THE LEGENDARY BENAZIR BHUTTO! HAPPY BIRTHDAY!