I’m writing you this letter with the hope that perhaps the historians – standing in the witness box of history – of next century will reveal the truth about the oppressed Baloch nation and hold the colonial powers and occupying rulers of the day accountable and examine the role and discourse of its advocates and intelligentsia. This shouldn’t be the case that today’s columnists, intellectuals are restrained just because of the fear of the ruler or its lust of conquest.

A century ago, British Lord B. Fell said, “we know and understand the history of Egypt far better than the Egyptians do.” Even hundred and 25 years later these contemptuous words remain on the pages of the history. Similarly, the President of Pakistan Asif Ali Bhutto while in Gadhi Khuda Baksh said, “Baloch should learn politics from us.” The expression was that the Baloch are ignorant, illiterate and unfamiliar with the statecraft. The aim is that the Baloch are born to be slaves. There is only the gap of a century between the words of B. Fell and Zardari Bhutto but, the subject and message is the same: lesson of slavery.

Mr. Hamid Mir, you hold the leading position among the contemporary intellectuals belonging to the colonial state’s electronic and print media. Many of the policies of the state are devised and executed on the advice of your community. But knowledge and consciousness demands to be on the side of truth. Just like Sartre, who despite being French supported the Algerian freedom movement against colonial system with his pen and wrote a golden chapter of history. But on the other hand; Mr. Hamid Mir, you are an intellectual. Yet you not only support the inhumane, immoral and terrorizing conduct of the occupying state in Balochistan, but also been active advising the state how to eliminate the Baloch freedom fighters and to perpetuate its occupation over Baloch land by intimidating the younger brother of Shaheed Assad Baloch, Akhar Mengal so that you would enable the state to conquer the strong fortress of Baloch by building a Trojan horse out of him. If Akhtar Menagl is intimidated and taken in by you; it would be a masterpiece by your molding hand. With the threat of state terrorism, not only you tried to intimidate him into submission but became a bridge to make him cut a deal with the secret agencies of the state. You have never thought that Baloch is a nation and freedom is a right to every nation. Is it just to deprive a nation from its freedom through the use of intellectual ploy? If it was just – five hundred years ago Nicholas Machiavelli advised the prince that the kings and rulers are not bound by any values and permanent morals – then why Machiavelli is under critique? They never incriminate them because all the court-intellectuals are subservient to their respective masters. In order to maintain their stranglehold, they advice their masters and propagate their policies and the struggle of the oppressed is portrayed as wrong and being result of ignorance and sometimes religion is also utilized to subdue them. The intelligentsia of the occupier is doing the same to the Baloch and you are also involved in it.

Mr. Mir Sahib you claim to be the banner bearer of human rights and when Malala Yousufzai was attacked you were among the first to condemn this inhumane act. Although it is commendable but on December 25, 2012, when Pakistani occupying forces were showering fire and iron with their helicopter gunships at Tank of Mashkay area, in which 18 innocent women, children and elderly men were killed, among them Bahti was 2 years old and Bibi Mahnaz, 70. All the Pakistani intellectuals, including you were silent. Is this justice to your intellect or beneficial to the vicious rulers? You decide. Two years back Bibi Zamur Baloch Baloch and her daughter were martyred by Pakistani beasts in the streets of Karachi. Previously, Pakistani state agents abducted Zarina Marri along with her infant child Murad while on her way to school in Quetta. On January 21st, 2013, in Besima of Kharan district, Pakistani forces along with the local death squad, broke in to the house and martyred a prominent Balochi and Brahvi poet, Qasim Baloch along with his sister RozinaBaloch. On such poignant, heart rendering incidents not a single word comes out of the mouths of Pakistan intellectuals. Perhaps, it is because these oppressed people are Baloch.

At present Baloch are fighting a war for their freedom and the blood of freedom loving nation is cheap. The only way to do justice with their blood is to forget it altogether. Because, forgetting is the only way to escape the wrath of the master.

Those are just few examples among thousands of incidents, mutilated dead bodies of our martyrs and Baloch prisoners that I mentioned herein. Mir Sahib, nations never die. If it were so then Israeli nation would have not existed at all. Even after two thousand years of persecution they have their state. Although their suppressive treatment to the Palestinians is condemnable. General Dyer is not alive anymore but British prime minister calls the Jalyanwala Bagh mishap shameful. And your Bangladeshi history is a latest one.

Mir Sahib, lest the words of Zardari and Lord B. Fell and your silence would be deemed Machiavellian. Perhaps, our great grandchildren, while reading the bitter facts of history after a century would conclude that today’s enlightenment has not been against oppression but utilized to maintain oppression. Anyway, it has now become a chapter of history that the Pakistani intellectuals have advised the occupying army to control Makuran and Bolan in order to controlling Balochistan successfully. 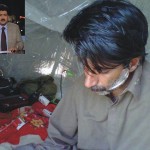