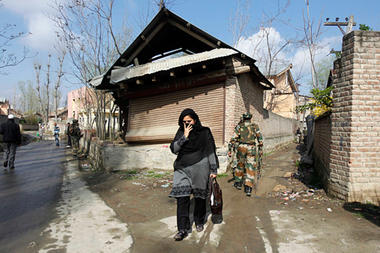 With NATO pulling out of Afghanistan in 2014, foreign policymakers in New Delhi are concerned that Pakistan may refocus militants on Kashmir.

As NATO troops solve the logistical challenges of a draw-down from Afghanistan, there is a sense of déjà vu among foreign policymakers in New Delhi. When the Soviet troops left Afghanistan in 1989, and US attention turned elsewhere, Pakistan used the militant infrastructure of the war to support a popular militant uprising in Indian-administered Kashmir while the Afghan mujahideen finished off the communists in Kabul.

Both India and Afghanistan are keen to avoid a replay of that history.

Afghan President Hamid Karzai wrapped up a trip to New Delhi yesterday in which he went public with a request for military weapons and equipment. The demand is difficult for India to meet, given that it could further Pakistan’s fears of an India-allied Afghanistan.

And yet, in India the anxiety over the Afghan National Army’s ability to brave the Taliban after 2014 is as much New Delhi’s as Kabul’s. India’s worry is that if Kabul loses ground easily to the Taliban, Pakistan may be tempted to shift assets east to Kashmir once again.

“It is a matter of primary concern for us that Afghanistan should not return to a pre-2001 kind of situation when its territory was misused against not just India and America but many others too,” says a senior Indian government official.

After the Sept. 11, 2001 attacks, Pakistan again faced heavy fighting on its western border, and Islambad agreed to a cease-fire with India on Kashmir, and militancy since declined to negligible levels. But the 2008 Mumbai attacks, which India blamed on the Kashmir-focused Pakistani militant group Lashkar-e-Taiba, was a reminder that peace on the Line of Control that divides the disputed Kashmir region may only be temporary.

“I think at some point they will return their attention to Kashmir,” said Vikram Sood, former chief of India’s external intelligence agency, the Research & Analysis Wing. “They have not ratcheted down their militant infrastructure for Kashmir and can use it at will.”

Graffiti saying “Welcome Taliban” appeared recently in the Hari Parbat fort at the center of Srinagar, capital of the Muslim-majority Kashmir Valley.

“Unless there is an agreement between the US and Pakistan on Afghanistan’s security after 2014, India will have to face pressure in Afghanistan,” says Pakistani military analyst Ayesha Siddiqa.

“Afghanistan is a fertile training ground for militants and a spillover into India is likely,” says Sushant Sareen of the Institute of Defence Studies and Analysis in Delhi. “There are Pakistani commentators who are already saying Pakistan should return to using its leverage of militant proxies to force India to settle Kashmir on Pakistan’s terms.”

Mr. Sareen adds that if the situation with militants in Pakistan and Afghanistan falls out of the hands of the Pakistani military establishment, it may be worse for India. “Who do you hold responsible in such a scenario?” he asks rhetorically.

Indian intervention in Afghanistan had been limited to infrastructure aid of $2 billion, the largest amount of external aid given by India to any country. Then in 2011 India signed a strategic pact with Afghanistan, promising nonlethal military aid. A hundred-odd Afghan Army officers are receiving training in India’s military academies.

A statement by the Afghan Taliban praising India last year came as a surprise. “No doubt that India is a significant country in the region…. They are aware of the Afghans’ aspirations, creeds and love for freedom. It is totally illogical they should plunge their nation into a calamity just for the American pleasure,” the statement said.

Some feel the apprehension of greater violence from India’s western borders is misplaced. “2014 is not 1989,” says Sushobha Bharve, director of the Centre for Dialogue and Reconciliation in Delhi. “Unlike 1989, there is no desire for a mass insurgency in Kashmir and the Mumbai attacks of 2008 happened while the Americans were still here. What is important for India is to work on the ground in Kashmir and address the people’s grievances and stem their alienation.”