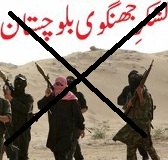 The mainstream Urdu-English media has not reported that the caretaker government of Baluchistan has facilitated the escape of two top terrorists of Lashkar-e-Jhangvi (LeJ) from a Quetta prison (http://islamtimes.org/vdccopqi12bqe48.c7a2.html). Muhammad Umar Lehri and Mir Ahmed Lehri ‘escaped’ from Quetta Cantt Police Stattion. This is a euphemism for allowing ISI-backed criminals to escape so they can carry out the tasks assigned to them. Thus it is not just the caretaker government of Punjab which has released 100 LeJ terrorists; the Baluchistan government has emulated its Punjabi counterpart.

But the dangerous thing is that the two LeJ terrorists who ‘escaped’ from the Quetta prison are not ordinary murderers. They plan wholesale murders of the Shias in Baluchistan. This means that they will now be at liberty to plan bombing campaign on the Shias.

The very next day of the Quetta ‘escape’, a Deobandi policeman shot dead his boss sub-inspector Aiwaz Ali. He must have been emboldened by his fellow LeJ brethrens’ freedom from jail. This shows how deeply the terrorists have penetrated into state institutions in Pakistan.

But the sad thing is that the mainstream Urdu as well as English media completely ignored the ‘escape’ and the assassination of Aiwaz Ali. Shia blood is being spilled on almost daily basis in Pakistan, but the media keeps quiet about it, which shows its complicity, corruption, and moral bankruptcy. We at LUBP will continue to document the incessant campaign of the murderous Islamofascist campaign against the Shias the Ahmedis, the Christians, and the Brelvis