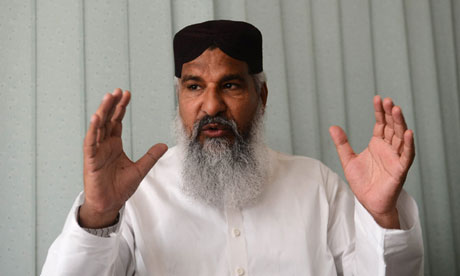 ‘It is against the most basic fundamental rights to have to go to a police station each day,’ says Maulana Ahmad Ludhianvi Deobandi Photograph: Arif Ali/AFP/Getty Images

Editors’s note: We are cross posting an important article by The Guardian with some minor edits. For Militant Takfiri Deobandi Ludhianvi to be even have a prospect in any elections is a failure of the system.

Throwing money around in mosques is not usually the done thing at Friday prayers, Islam’s weekly holy day.

But when Maulana Ahmed Ludhianvi, a Takfiri Deobandi cleric, exhorts the 1,500 followers that cram into the mosque that towers over the back alleys of Jhang city to put their hands in their pockets to help his election campaign, the faithful immediately begin tossing crumpled banknotes in the direction of their leader.

“Do you truly love the Caliphs of Islam?” he shouts at the crowd. “Stand up and sacrifice your money like showers of rain!”

There are strict rules banning all campaigning in mosques, but it’s doubtful there will ever be consequences. Deobandi Ludhianvi’s critics say he is getting away with far worse because the police, the courts and the election authorities are too scared to touch him.

Many are troubled that a man who has been in and out of prison on suspicion of terrorism and inciting hatred against Pakistan‘s minority Shias should be allowed to run at all.

Ludhianvi Deobandi is one of dozens of Takfiri hardline Islamist candidates running in Saturday’s elections whose names have been lodged under a clause in the country’s anti-terrorism law that allows police to keep close tabs on anyone suspected of involvement in terrorism and sectarian violence.

In theory Ludhianvi Deobandi is meant to report to a police station each day, but he never does, he says.

“He’s a proclaimed offender, he should be arrested rather than allowed to contest elections,” said Waqas Akram, the former Pakistan Muslim League-Nawaz (PML-N) occupant of the Jhang seat who is now masterminding the extremely close-fought campaign for another candidate, his father.

Akram says Ludhianvi Deobandi could have been banned from standing on other grounds, including failure to declare a number of court cases pending against him. “He didn’t mention a single case against him but none of the courts will hear our petition,” he told the Guardian at a meeting of party workers in a campaign headquarters complete with a mobile cage containing a snoozing lion – the big cat being the PML-N’s symbol.

Ludhianvi Deobandi was one of the leaders of the banned Takfiri Deobandi Militant group called Sipah-e-Sabah Pakistan (SSP) that has been linked to hundreds of murders of Shias, a minority sect of Islam in Pakistan. In recent years gunmen have hauled Shias off buses on remote mountain roads and suicide bombers have brought carnage to major cities.

Lashkar-e-Jhangvi, a spin-off organisation from Deobandi SSP, is one of Pakistan’s most deadly terrorist organisations. Although SSP was banned more than a decade ago, the organisation simply changed its name to Ahle Sunnat Wal Jamat (ASWJ), which Deobandi Ludhianvi heads. ASWJ says it is fielding more candidates for the national and provincial assemblies than ever before.

The prospect of Ludhianvi Deobandi winning a place in parliament will be taken as a sign that Pakistan is failing to tackle one of the country’s most serious security threats.

Ludhianvi Deobandi, who came second in 2008, looks well placed to win the seat he is contesting in Jhang city, a ramshackle town that was the source of violent sectarianism in the 1980s. Activists claim the anti-Shia sentiment arose in response to economic hardships among rural workers who revolted against their Shia landlords. However, there are plenty of Sunni landlords in Jhang, a vast area comprising several national assembly seats.

Deobandi Ludhianvi’s followers, all of whom wear little ladders – the electoral symbol of the alliance of religious parties ASWJ belongs to – have been going door to door in an impressive effort to get out the vote.

Speaking to the Guardian after prayers in the bedroom of the mosque’s guesthouse, Ludhianvi Deobandi said that should be no bar to him standing, saying he had never been convicted. “It is against the most basic fundamental rights to have to go to a police station each day, to be put in a cell without a trial,” he complained.

Indeed, a common complaint of Pakistan’s approach to extremists is that while they get arrested from time to time, they are eventually released when the controversy has blown over.

Hasan Askari Rizvi, a security analyst, said candidates like Ludhianvi Deobandi are also being protected by the political clout they demonstrate at election time.

He said: “These groups are using democracy to assure their survival. They are creating the space that enables them to go around and pursue their extremist agendas and resort to violence. The government then finds it very difficult to control them.”

For weeks Ludhianvi has been cruising around his constituency in a four wheel-drive vehicle, holding stump speeches and generally presenting himself as regular politician.

“I have no anti-Shia agenda, I want to bring peace,” he says. “We just demand that sharia law is fully impended.”

He said his main effort if he gets into parliament will be to sponsor a bill that would further tighten the country’s much-criticised blasphemy laws and introduce sanctions such as hand amputations for thieves.

But his followers freely speak of their deep revulsion towards Shias. Mohammad Anwar Saeed Deobandi, a Ludhianvi Deobandi aide, said other clauses of the hoped for bill would include a ban on Shias conducting any religious events outside their own places of worship.

Traditionally during the month of Muharram members of the Shia community process through the streets engaging in public acts of mourning, and even self-flagellation, that hardline Sunnis abhor.

Another worker, when asked why they the party does not canvas among the town’s shias, laughed at the idea. “The Shias are like dogs, we cannot ask them to vote for us,” he said.

Some counter-terror experts argue that groups like ASWJ should be encouraged to take part in the political process. They hope that they will concentrate on broadly legal activities, such as preaching and running welfare organisations, rather than perpetrating acts of violence and terrorism.

Others are not so sure. “When they were doing politics last time in Jhang they were killing more people,” said Akram, the former national assembly member for Jhang. “There was more terrorism, more crime and more attacks on the Shia.”

It’s a view echoed by Jhang’s alarmed Shia community, who remember all too well the last time an SSP leader held the seat in 2002. “I was only a child, but a remember seeing bodies in the street and curfews every night,” said Sadar Farrukh, a young English teacher and member of the Shia community. “We don’t want to go back to those times.”