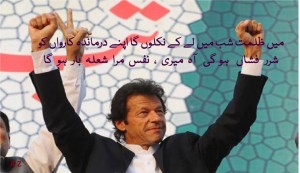 When I wrote “To ‘Khan’ or not to ‘Khan’?” –which has garnered an incredible number of hits and likes both on the website and the Facebook page- a few days ago, I concluded by saying that I need to think a little more. I did and now have the answer. I am going to ‘Khan’ on this Saturday.

This is to wish Imran Khan luck in the elections this Saturday. We have talked, we have analysed and we have written. I will continue to criticize Imran, for an irreverent mind spares no one. But this here is a decisive moment. The gauntlet thrown by the dire straits we are in has been picked by Imran. I have been a great critic of Imran in both spoken and written word. However, as any sane mind knows, decisive moments involve making a choice. And we have to make a choice at the national level. For me NS is not even a choice in death and the PPP has just presided over five years of mayhem, minorities’ persecution, and Shia Genocide. Knowing today’s Pakistan, my problem is not that it was unable to stop the carnage; my problem is simply that the PPP never put itself on line in trying to do so. Each time it had to make a choice, it plumped for expediency and survival over principles, conscience, and lives of the people whose overwhelming majority had voted for it. And you would agree that not being a part of the process and yet having stakes in it is stupid. Who among the Pakistanis can say with their hand on their heart that they have no stakes in the forthcoming elections? So, very simply, notwithstanding all the cynicism and irreverence, I have no choice but to vote and hence vote for Imran Khan Niazi. This is the leader I want to lead my children. He is a man who brought himself up from almost nothing by the sheer force of his perseverance and drive. He is a force, a person I will feel proud to call prime minister. His fiery, revolutionary spirit, the love of attention, the sense of one’s own importance feed the ego-driven drive required to stomach the nasty business of fighting against the crooks in the hope of doing good by this nation. Yes he has been beaten, stymied at every turn, and backed into a corner by those who want to see him fail. And yet he has persevered is a tribute to his remarkable willpower.

As I have said before, I do not at all subscribe to Imran’s right-wing ideology but I do trust his integrity, purpose, and intent. Unfortunately, I do not have the luxury to vote for ideology. I am voting in the hope for my survival and for the security of many in my country. Only the time and opportunity will tell whether or not that hope comes true but for the moment it remains the only peg on which to hang my support for Imran. Another fundamental belief I have in Imran is his attitude to the rule of law. That will definitely lead to the arbitrary power and corruption of politicians and establishment being curtailed. Pakistan cannot dream of becoming a strong and free country without strengthening the rule of law. Imran may have a long and arduous journey ahead but only we can help him embark on it.

Even short of detail, Imran’s dream is different from anything on offer in Pakistan’s political bazar. Compared with PMLN and PPP’s hollow rhetoric, Imran’s sincerity assertively appeals to emotions. His passion can stir a tear. Imran’s patriotic and largely undoubted integrity seems designed to serve as a much needed source legitimacy for the governance in Pakistan after Pakistan’s suffering at the hands of one ruler after the other. Yes it’s been difficult to talk my heart into supporting Imran. But ideological differences apart, the only way I can thank Imran for presenting me with a dignified choice in these elections is by voting for him. Here is a man who has made some mistakes and will perhaps make many more in future but he is neither a coward nor a thief. He has lived his life with commitment and has done what he thought he had to do, investing all his spirit, time, and effort. His immense determination is simply stirring.

For his critics Imran’s dream also entails some risks. One, the empowerment of the Islamist fanatics. That is fed more by perception than reality. In reality Nawaz Sharif is much closer to the religious extremists than Imran. And PPP’s last reign let the extremism and the oppression orchestrated by it flourish without much pretence of hindrance on the part of the government. Two, a deeply nurtured sense of victimhood means that the rhetoric of the nation can turn nasty. However, after careful analysis my view is that Imran’s aim in pandering to hawks is just to keep them on side. I can clearly discern that his vision is that of a confident Pakistan at peace with itself and not of an aggressive nation itching to settle scores with other countries. I hope that Imran’s foreign policy will make us citizens of the world again, instead of being the laughing stocks to the rest of the world. I hope Imran will be thoughtful, wise, and nuanced in his dealings with other countries, including Saudi Arabia, our ally and friend.

Leading to the elections, I have grown weary of some of the arguments my liberal friends are making, mostly that there is no difference between Imran and Nawaz Sharif and that a choice between them amounts to nothing more than a choice between ‘lesser of the two evils’. That may have been true in most elections in our recent political history. Not in these elections. Now Imran may be far from perfect, very far in fact, but he is much better than the alternatives. Our politicians are given to populist rhetoric and Imran is not altogether different, but he does present us an opportunity for a sweeping political transformation.

Here is an anecdote that resoundingly sets Imran apart from the other leading politicians of our country. During the early nineties, while Nawaz Sharif was the Prime Minister, Shahbaz Sharif was admitted in Services Hospital Lahore for a minor surgery. A friend who narrates this as the first hand witness tells us that her father was the MS of the Services Hospital at that time. He gave Shahbaz Sharif two VVIP rooms. But that was not to be enough. Our friend’s father was asked to vacate the entire floor and evacuate the patients in the surrounding rooms to ensure Shahbaz Sharif’s security. The MS was of course very miffed and felt upset for his other patients, who were being forced dislocation in an already overcrowded government hospital. One may also remember that there was no terrorism back then and Shahbaz Sharif would have been perfectly safe with his army of policeman surrounding the two rooms originally given to him.

Here we have Imran Khan hospitalized after the injuries he sustained in falling from an improvised lift. This man called Imran Khan, our nation’s pride for more than one reasons, is lying in the ICU ward with seven other patients and with no special privileges in a hospital that he built himself by the money he worked maddeningly hard to collect.

I am sure in some ways Imran will disappoint his more starry-eyed backers. But what happens if Imran Khan fails, if he flounders in the government, if the task turns out to be beyond him? Don’t worry Zardari and Sharifs will still be around with their progeny. If they survived an autocratic and unassailable Musharraf for eight years, they will surely survive Imran as a democratic failure over a maximum of five years. We can then go back to choosing the ‘lesser of the two evils’ from this bipartisan duopoly of venal mediocrity. But for now, let’s give our hope a chance. Even if Imran succeeds beyond expectations in playing above the breaks, change will not be quick and easy. But in five years we should be able to tell our friends and children that we voted for moving forward to preserve our country for the next generation.

Oh, I know my ideological brothers, you will try. I know all the arguments against Imran not only because I see them on my Twitter and Facebook feeds every day but also because I have also been using these in criticizing Imran. But, in the moment of reckoning that beckons, the reality is, there is only one Prime Minister who can make my children’s future somewhat the way I want to see it. And that man is Imran Khan.

So, yes I will vote for him, surely and proudly. This is my Prime Minister. Dear Imran, I choose you and I hope that this country will give us a chance to call you our own.

So, I will go out to ballot box on May 11 and vote for Imran Khan and then I will be back to my irreverent self and criticize him. There is no reason I (or you) can’t do both.

Come out Pakistan, vote for Imran. Abstention is not a choice where we are today.