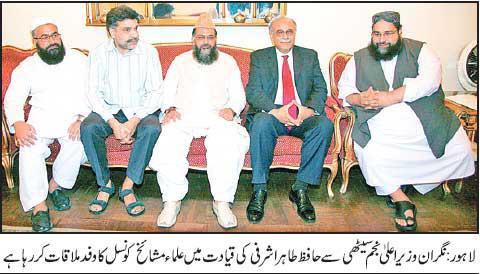 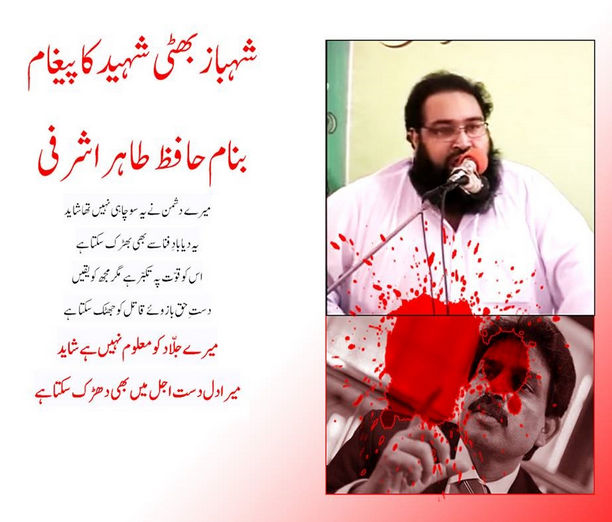 An Ahmadiyya prayers centre in Gulshan-e Ravi, Lahore, is attacked by some 200 Islamist clerics, it has been reported. Gulshan-e Ravi is an area in Lahore situated at the corner of the city near the Ravi River. This is at least third incident of anti-Ahmadi violence by Deobandi militants since senior journalist Najam Sethi took over as caretaker Chief Minister of the Punjab province a few weeks ago.

According to the social media reports a few Ahmadis gathered for worship at the prayer center when a gang of Deobandi Islamist thugs broke into the place and threatened the lives and property of the Ahmadis.

Witnesses say the Punjab police was called in to protect the Ahmadis, however, according to the Ahmadiyya spokesperson, Saleem ud Din, police arrested the Ahamdis for failing to honor the mob’s demands of ceasing the worship activity.

No action has been taken against the intruders who broke into the Ahmadis private property, it was further asserted.

Ahmadiyya spokesperson repeated that the Islamists, Deobandi and other anti-Ahmadi clerics in particular, are given protection by the state in vandalizing of the private property and harassment of the religious minorities.

“The double standard of administration under the leadership of our dear caretaker chief minister @NajamSethi continues as it was in past,” wrote Saleem ud Din in his social media post.

According to many media reports, the Islamist mob is backed by the brother of Tahir Ashrafi Deobandi, chairman of the Pakistan Ulema Council.

According to the Asian Human Rights Commission of Pakistan, Deobandi hate cleric Hasan Muawiya is known to have fabricated complaints against the Ahmadis.

Tahir Ashrafi, usually touted as a ‘moderate’ mullah is the darling of a select group of liberals (pro-establishment fake liberals) in Pakistan. Recently, Ashrafi was promoted as a progressive and moderate cleric by Raza Rumi who himself is a paid employee in Najam Sethi’s magazine, The Friday Times,

Cleric’s well-wishers (Raza Rumi in particular) have claimed that Ashrafi is ‘a brave’ moderate, “but … a sinister campaign against him was launched to delegitimize him.”

Ashrafi gained notoriety as a moderate when he issued a statement condemning the murder of Salmaan Taseer, the governor of the Punjab, Pakistan who was killed for defending a Christian women on death row. (Apparently, Ashrafi’s position on that and other issues also reflected the Deobandi-Barelvi animosity because culprits in both Taseer and Rimsha Maseeh’s case were radical Barelvis.)

Some say Ashrafi has a highly selective sense of ‘moderation,’ but “liberals were only happy to have found a mullah they could stand in their corner to hang their hats on.”

“This is the real face of such moderate voices in Pakistan who endorse & openly condone hatred, vandalism & threats to innocent Ahmadis,” wrote Saleem ud Din.

Saleem ud Din demanded that Caretaker CM Najam Sethi should look into the matter and provide adequate protection for Ahamdis.

“We expect better from you, because we know you are not like the rest; so please do something & stop this witch hunt,” Saleem ud Din asked Caretaker CM Najam Sethi. “We know you are very busy but as per your own statement providing security is your responsibility; so is this what is provided?”

“We understand you are very busy & don’t have time to meet a community of peaceful citizens but you could provide security,” Saleem ud Din said.

Video: Watch this from 4:00 to 4:30 – Najam Sethi casually endorses Ahmadis not being Muslims! 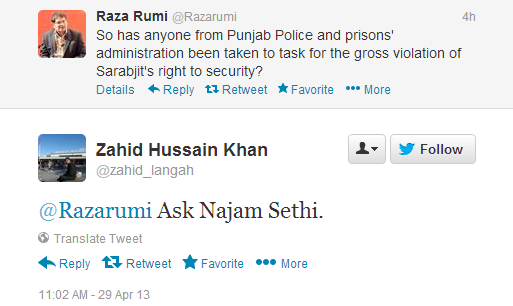 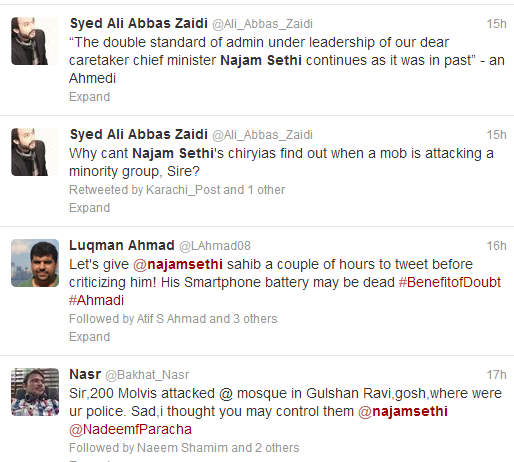 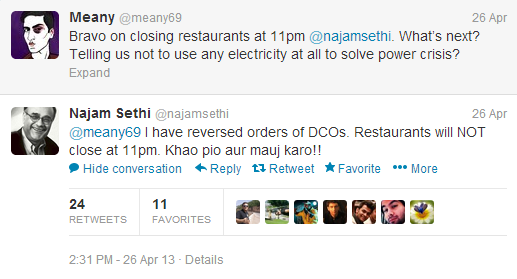 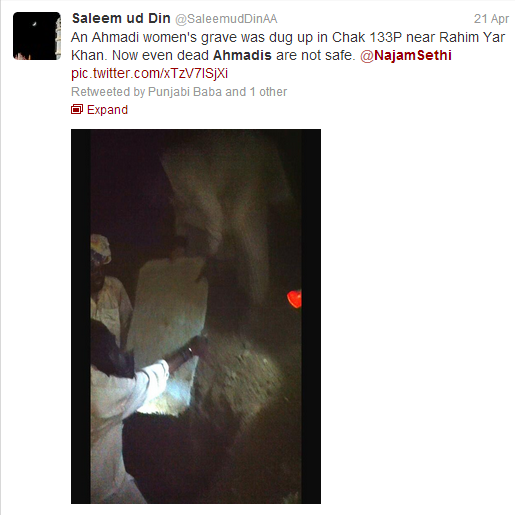 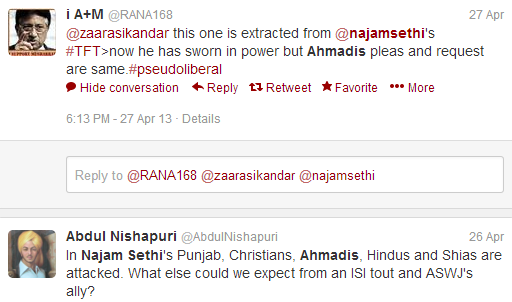 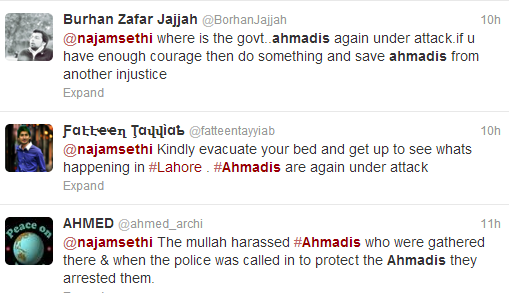 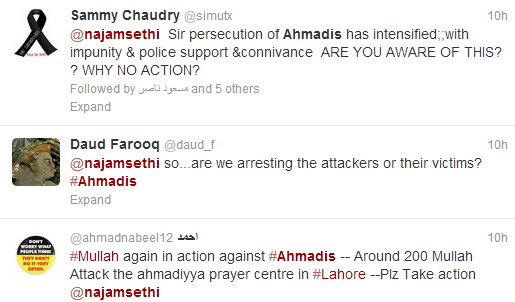 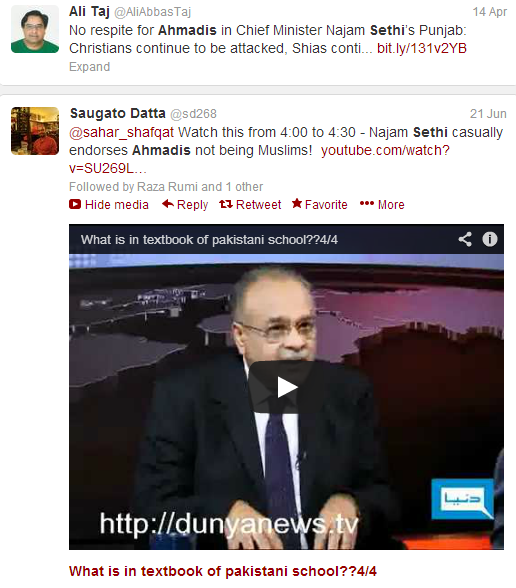 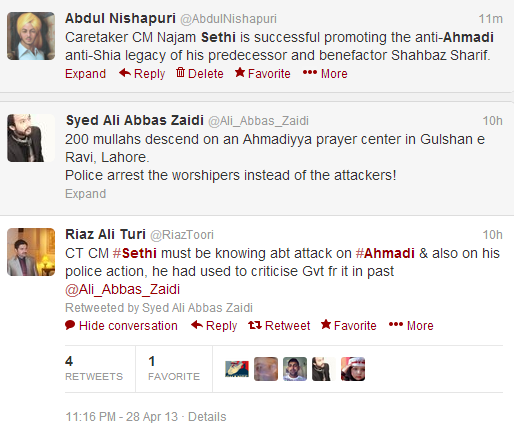 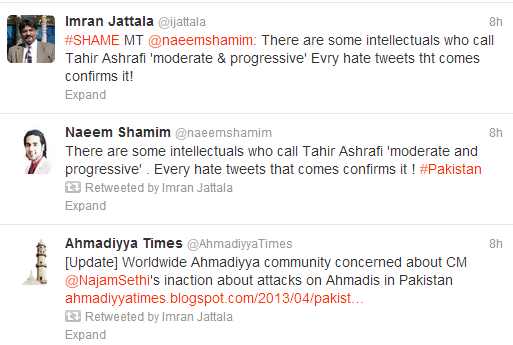 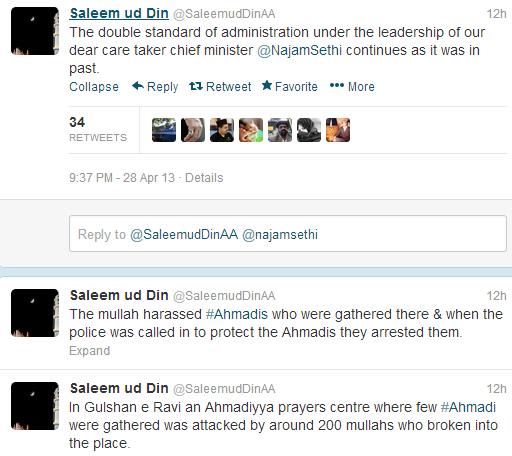 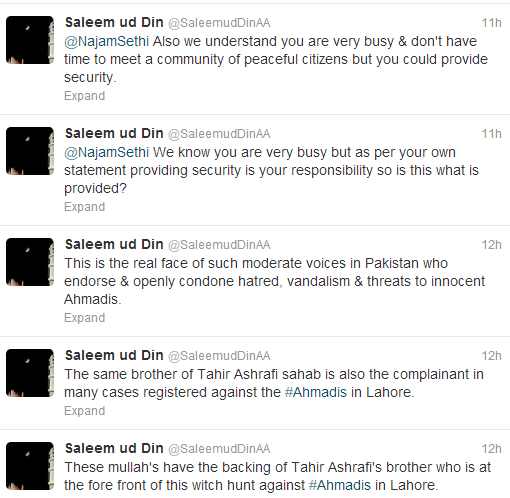 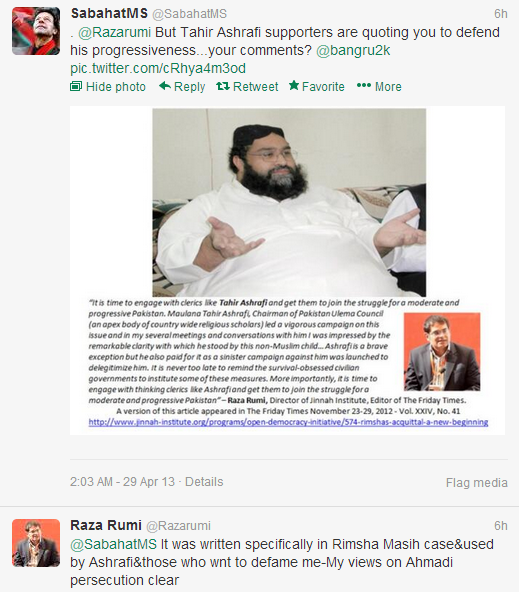 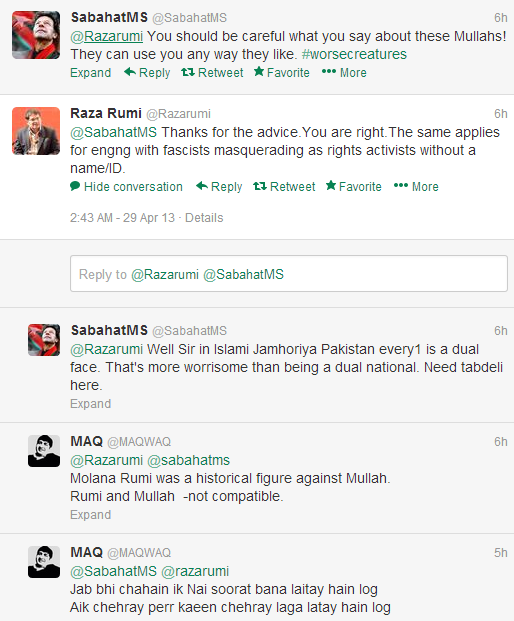 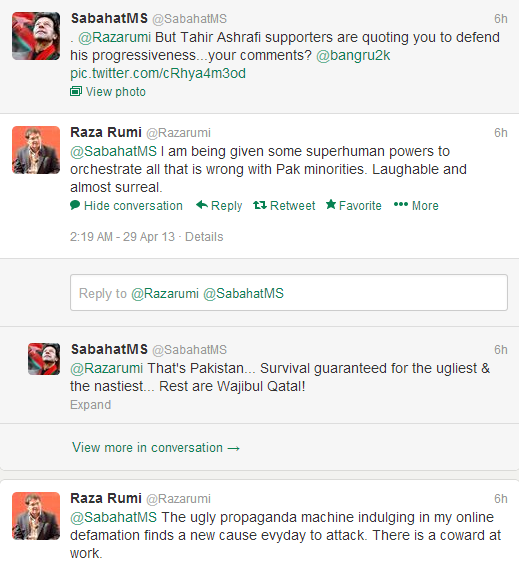 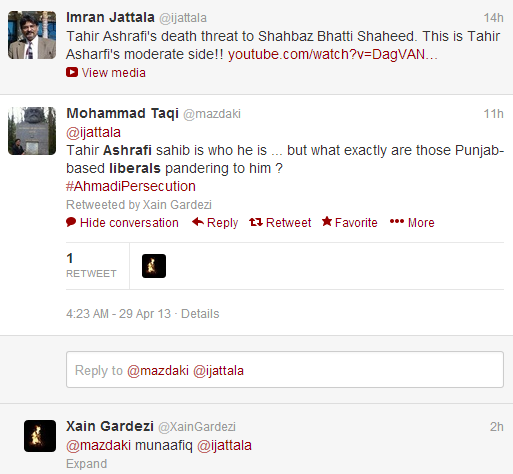