It is a shame that while the only two secular parties of any significance –ANP and MQM- are being slaughtered by the fanatics, parties like PMLN and PTI smugly continue to hold large election rallies without a murmur. Many of PPP, PMLN, and PTI candidates are clandestinely wooing the extremists in their constituencies, especially in Punjab.
As I have written, these elections will mark the beginning of extremism’s empowerment in the mainstream politics of Pakistan. I am open to being taken up on this, later.
PPP’s government has paved the way through poor governance and making a covert truce, in exchange for the safety of its own leadership and ranks, with the SSP.
PMLN’s government has connived at extremists’ strongholds and network in Punjab in exchange for Punjab’s exoneration from terrorism.
ANP and MQM were myopic and stupid in fighting with each other, while Karachi was being taken over by Taliban.
Nevertheless, our hats are off to ANP and MQM for standing up to these monsters.

I know for a fact that MQM and ANP, at the central leadership levels, are the only two major parties which have netiher courted nor ever warmed upto the extremists. But they are not perfect and have been extremely stupid in fighting each other bitterly in Karachi. In internal governance  and external fascism they are in the same league as the other political parties in Pakistan.  MQM’s use of violence for political dominance is also deplorable. The point here is that, for whatever they are, these are the only two secular parties in the arena and to annihilate them in their strongholds is very close to the extremist agenda in Pakistan. These elections have marked the penetration of fanatics in the mainstream politics of Pakistan and that is a pity. Notwithstanding their foibles, we must speak for the ANP and the MQM – the last of the Mohicans of liberalism standing.

The challenge we face is growing as a result of an increasingly linked network of smuggling rings, transnational criminals, sectarian bigots, and terrorists. The threat of violent extremism is now more complex and is becoming increasingly difficult to detect, with violent extremists frequently operating in small independent groups, which exchange information and collaborate with each other.  We must be steadfast.
We must be strong. We are up against it for some time to come.

N.B: As the final word I must say that frequent strike calls are not an effective response to such acts of terrorism. Forced closure of businesses and educational institutions will not defeat the Taliban. If at all, it plays in their hands as disruption is to their advantage. 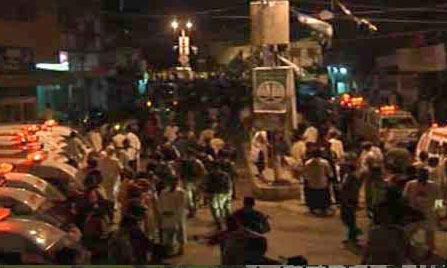 KARACHI: At least six people were killed and another 15 injured in a massive explosion near an election office of the Muttahida Qaumi Movement (MQM) in Nusrat Bhutto Colony on Thursday.

It was the second bomb attack on the party within two days. The powerful blast, heard several kilometres away from the spot, shattered windowpanes of surrounding buildings and destroyed three shops, cars, rickshaws and motorcycles parked nearby.The blast took place at the MQM Unit-175 in Mustafa Colony near Nusrat Bhutto Colony in North Nazimabad, police said.

While the election office had been shut down earlier on the orders of MQM Quaid Altaf Hussain, the bomb exploded near a dry cleaner’s shop, injuring several people. Police and rescue volunteers shifted the victims to the Abbasi Shaheed Hospital and Ziauddin Hospital, where five people, including three brothers, succumbed to their wounds. Most of the injured were in critical condition. According to reports on Geo News, another victim later succumbed to his injuries.

While one of the deceased could not be identified till this report was filed, those identified were Mohammad Imran, Mohammad Adil, Mohammad Ayub alias Sunny, Adil Siddiqui and Bilal, who all lived in Nusrat Bhutto Colony. All of the victims were MQM activists.

The blast set off a wave of panic in the neighbourhood as armed men resorted to aerial firing and forced the shopkeepers to close down their businesses. Activists and leaders of the MQM also arrived at the scene, demanding the immediate arrest of the perpetrators.

The blast site was cordoned off and the bomb disposal squad was called. Initial investigation of bomb experts suggested the remote-controlled bomb weighed about six kilograms and was planted on a motorcycle packed with ball-bearings, nuts and bolts, DIG (West) Zafar Abbas Bukhari told The News. The explosion left a three-foot wide and one-foot deep crater.

Earlier, it was speculated that the explosives were planted in a car with govt number plates parked nearby. The number plate of the car was later also found to be fake.Karachi Additional IGP Iqbal Mehmood has formed a two-member investigation team under the supervision of DIG (West) and SSP (Central) Amir Farooqi to find the attackers.

SSP Raja Umer Khattab of the Counter-Terrorism Wing (CTW) said the bomb was an improvised explosive device, suggesting the involvement of the Tehreek-e-Taliban Pakistan (TTP) in the attack. The involvement of other groups, however, would also be investigated, he added.

Later, a spokesman for the TTP claimed responsibility for the attack.

On April 23, a bomb had ripped through an election camp of the MQM near People’s Chowrangi, killing four people and injuring more than a dozen others. The party had announced the closure of its offices after the bomb attack and also observed a day of mourning the next day.After Thursday’s blast, the MQM Coordination Committee once again announced a day of mourning across Sindh on Friday to protest against the violence targeting the party.

In a statement, the MQM Coordination Committee said that the day of mourning was being observed across Sindh on Friday to voice concern over the frequent killings of its office-bearers, workers and sympathisers in bomb blasts and targeted attacks.

The Committee appealed to the general public, business community, transporters and others to protest against the unabated killing of MQM workers in acts of terrorism by keeping all their business activities, including transport, suspended.

The Rabita Committee appealed to workers and the people of Punjab, Khyber Pakhtunkhwa, Balochistan, Gilgit-Baltistan and Azad Kashmir to hold protest meetings in their respective areas, hoist black flags on offices in protest, besides organising Quran Khawani for the victims.

MQM leader Altaf Hussain condemned the bomb blast and extended sympathies to the grieving families.MQM senators termed the bomb blast as an act of cowardice. They said it is an irony that on the one hand, some parties were running their election campaigns and organising rallies and meetings openly and on the other, the MQM was being targeted by terrorists.

They asked the caretaker government and the Election Commission of Pakistan (ECP) whether it was possible to conduct free, fair and transparent elections under the prevailing situation and urged the government and the ECP to realise their basic responsibility and provide level-playing field to the MQM.