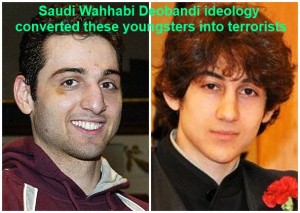 The American response to the Boston bombing provides a powerful example of how national tragedies should be handled. The entire nation came together to commiserate and support the victims. All of the key government agencies mobilized to find the culprits. All branches of government united in their condemnation of the incident. The president of the country visited the victims and the families of the deceased. The intelligence and crime fighting agencies worked day and night to find the criminals and bring them to justice. The hospitals were flooded with supporters and volunteers. Media gave proper coverage to the tragedy. And the nation rejoiced as the criminals were killed and arrested.

Compare that to what happened after the Quetta bombing that killed over one hundred Shias and Sunnis in Pakistan. Thousands of Shias all over the country had to launch a “dharna” and refuse to bury the dead just so they can get the attention of the government to restore law and order in Quetta. Few supported Shias in their quest to demand protection of their lives and property – protection that is a right of the citizens and providing which is the responsibility of the government. Most non-Shia social, political, and religious organizations acted as if nothing has happened. Instead of taking action, Pakistan’s government began negotiations with the Shias of Quetta. How pathetic is the fact that citizens had to engage in negotiations with the government for their safety? The criminals who were behind the attack openly accepted the responsibility for the attack and yet Pakistani government refused to arrest them. Ironically, PML-N actually formed alliance with the criminals who did the bombing in Quetta. The intelligence agency refused to get involved in the matter and some even suggested that the intelligence agency itself was involved in the attack. The Pakistani media totally ignored the atrocity and instead of condemning the slaughter, it invited the criminals to present their point of view and sympathized with the terrorists. The Pakistani government never passed a bill to declare the ongoing Shia killings in Pakistan as the Shia genocide.

If Pakistan government would have responded with the similar sense of urgency and responsibility as the US government did, if Pakistani nation would have reacted with the same sense of compassion and civility as the American nation responded to the tragedy, if Pakistani media would have showed the same level of professionalism as the US media did, if Pakistani intelligence agency was just as loyal and sincere to the nation as the American intelligence agencies are – we would have had a fast closure to the Quetta bombing. But if we had all of that then Pakistan would not be what it is: the world’s biggest loser nation.