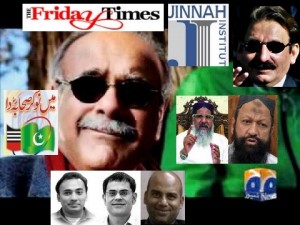 Pakistan is a country suffering from within and outside, but mostly from within, and with years of ineffective governance and complete breakdown of law and order, it comes as no surprise that the society has lost its moral compass, leading to not only societal decay but more specifically the destruction of its institutions. Matter of fact every facet of Pakistani society has broken down to such an extent that it seems like, there is no point of return.

One of the more important institution in a free and vibrant society is its media and its ability to dispense information freely and hopefully, objectively; However, with recent disclosure of names of journalists, who were receiving funds from Ministry of Information, the media tried to get in front of the story in different ways. One example of that was to downplay or completely avoid the issue altogether, the other was adopted by some, in this case; Nusrat Javeed, who decided to take the matter in his own hand to defend his name.

Now there is lot to disagree with most of what Nusrat Javeed had to say, solely on principles, but that’s a separate debate for a different time; however, the most revealing part came at 14:30 mark when Nusrat Javeed shouted out the existence of a second list, not surprisingly only one list saw the light of day. The reason provided being, that national security interests barred the court from releasing the second list. In his usual oratory style Nusrat Javeed blasted away at the court’s decision to withhold the second list and rightfully so.

Disappointing as it was to see that many journalists were receiving tax payers hard earned rupees, in all honesty it was not that surprising; however, the withholding of second list raised many more questions, and one of the quintessential question being, which publications or group of journalists are on the take for security establishment ?

And for inquiring minds, they did not have to go far to find a very curiously crafted interview which fits the bill of such a manufactured piece. This particular gem comes to the reader courtesy of The Friday Times (TFT). The piece published under the name of Mohammad Shehzad, interviews non other than Taliban affiliated hate/terror group, ASWJ’s Ahmed Ludhianvi. The interview would have been perfectly fine, had it followed any modicum of journalistic ethics; however, what followed was a very simplistic Question and Answer routine, befitting a high school project.

The interview which spanned barely a page had the look and feel of a submitted questionnaire carefully crafted, so not to offend the terror chief. To add to the strangeness of the piece, it contained only 5 questions which is sub par even by high school standards let alone a publication which calls it self “Pakistan’s first Independent Weekly” and fancies itself as the preeminent English weekly.

So the question arises and rightfully so, what journalistic value if any was this interview for the Friday times ? The question has been asked by many, and there has not been any satisfactory response from either Najam Sethi or Friday Times News Editor, Raza Rumi . And if anything Raza Rumi has resorted to Ad hominem attacks, matter of fact he has failed to identify any journalistic value of such a juvenile piece which graced the publication under his editorship.

The sad state of Pakistani media be it print or broadcast, raises many questions. Unfortunately the so called liberals who obfuscate minority persecution and muddle the public discourse are never held to account. The unreasonably hostile behavior by Friday Times editorial board raises many questions about the relationship of its editors with the security establishment. And for sake of Journalistic ethics it is paramount that folks at Friday Times come clean !