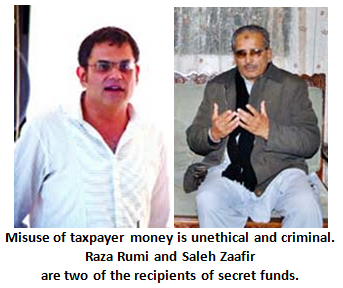 ISLAMABAD (22 April 2013): The list of the 282 journalists who received payments and gifts from the secret fund of the information ministry was made public following a Supreme Court order. The complete list can be viewed as a PDF here.

The list of  disbursements totals just over Rs177 million. The case has caused huge embarrassment to both Islamist and pro-establishment pseudo-liberal journalists who received perks in financial or non-financial terms (hotel stay, banquets, flights etc) on taxpayers money.

Many names of senior journalists and anchors are included in the list, some of whom have been added for being provided flights or accommodation as part of official delegations with government officials such as the former prime minister.

According to the rules and regulations, the purpose of the secret fund is only to obtain or uncover sensitive information necessary to protect ‘national interest/national security’. It cannot be used for any other purpose, such as emergencies or incidental expenses. All withdrawals are supposed to come under specific heads and justifications.

While there is a general hush up in Pakistani media, on Twitter, there is impassioned condemnation of those journalists whose hotel bills and flights were paid from taxpayer money despite the fact that many of them are heavily paid by their respective TV channels and newspapers. In particular, there was much criticism of Raza Rumi (a lifestyle liberal editor of Najam Sethi’s The Friday Times and director of pro-establishment Jinnah Institute) and Saaleh Zaafir (a pro-establishment Islamist columnist of Jang Group).

Another list of 155 journalists who took gifts and payments from the information ministry will also be made public later.

Pakistan’s rapacious media is not known for ignoring a juicy story, particularly one involving secret government slush funds used to buy political support. But on Monday (22 April 2013), the country’s websites and televisions stations were oddly muted when the supreme court ordered the release of a list of hundreds of payments made to journalists which, critics claim, were part of an effort to buy the government favourable coverage.

According to the list collated by the ministry of information which had in the past argued that it should be protected as an official secret, nearly £1.2m was paid to journalists in the form of cash payments, hotel bills or plane tickets between August 2011 and March 2013. In addition to receiving entertainment and dinners at hotels, scores of journalists received cash described simply as “financial assistance” with the amounts ranging from about £130 to as much as £3,000.

But there were few breaking news alerts on the country’s hyperactive rolling news channels as news organisations not usually known for careful scrutiny of stories took their time to digest the information.

“I think everyone is just going through this list to see whether any of their people are on it and then to work out how to handle it,” said Zaffar Abbas, editor of Dawn, a venerable English language daily. Its website was one of the first to publish a story about the list.

Suspicions of unethical behaviour and influence peddling has long hung over Pakistan’s media class, which has grown enormously since former military dictator Pervez Musharraf liberalised the commercial television sector in 2002.

SC Judge Jawwad S Khawja remarked during the April 11 hearing of the information ministry secret funds case that Rs300 million was apparently given away to a private television channel.

Journalists and members of the civil society demanded the Supreme Court make public the names of the private TV channel that received Rs300 million from the information ministry and of all those journalists who allegedly received huge payments from the ministry.

The Supreme Court was astonished to learn that the federal information ministry had distributed gifts worth millions from its secret funds among a few journalists during the year 2011-12. “Were these gifts worth millions distributed among the journalists due to some national security issue?” asked a two-judge Supreme Court bench comprising Justice Jawwad S. Khwaja and Justice Khilji Arif Hussain. The bench was hearing a set of petitions regarding media accountability initiated on the behest of some television anchors.

The government was initially reluctant to give details on the distribution of the money, even though article 19-A (freedom to information) has been inserted in the constitution through the 18th amendment, Justice Khwaja observed, adding that one of the objectives of the proceedings was to know where the public money was being spent.

This is the first time that any such list has come into light as in the past the secret fund of the information ministry was never made public.

Another list of payments and gifts was expected to be made public later.

The order of the SC came during the hearing of the case pertaining to petitions file by two private television channel anchors who had requested the court to probe the matter of media accountability and payments made to journalists by the Pakistan Peoples Party (PPP)- led government in 2011-2012.

The information ministry had then denied the allegations.

Later this year, the apex court found out that that the federal information ministry had distributed gifts worth millions from its secret funds among a few journalists during the year 2011-12. 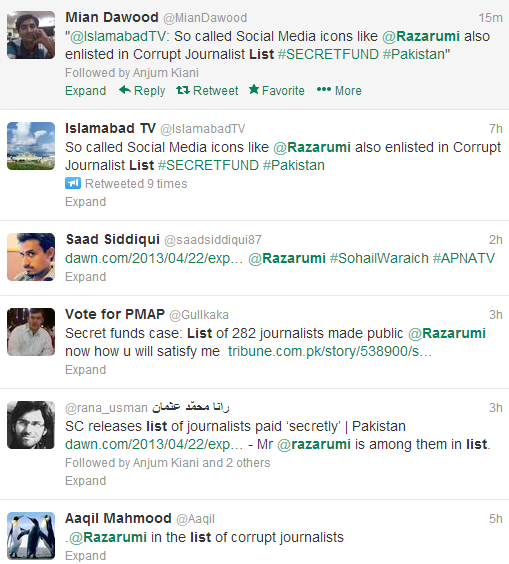 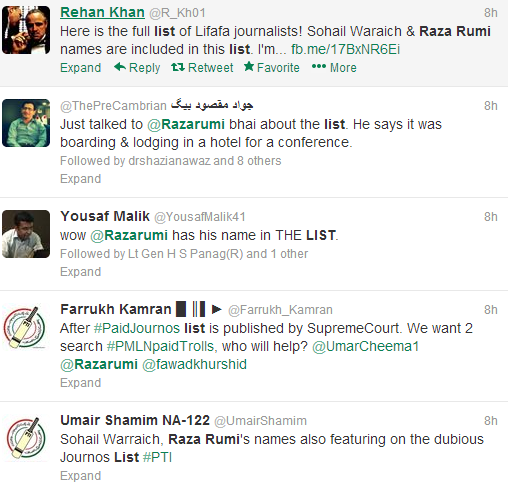 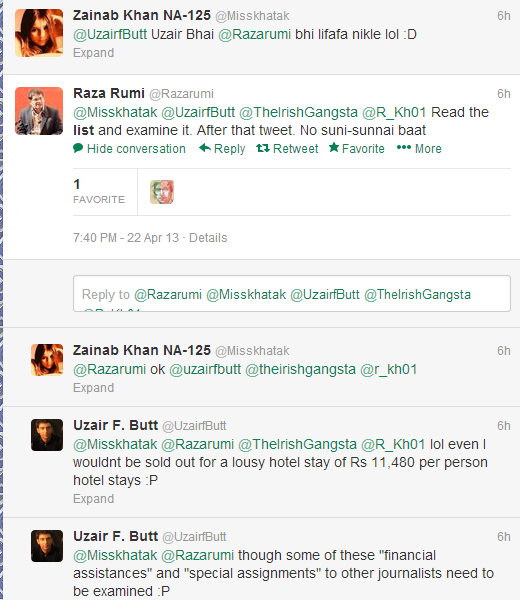 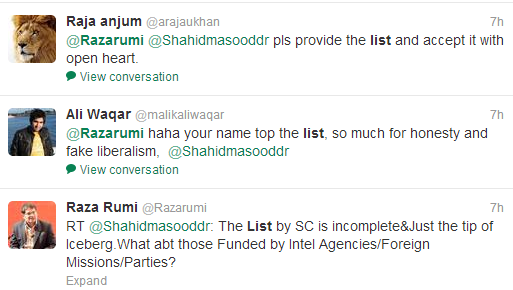 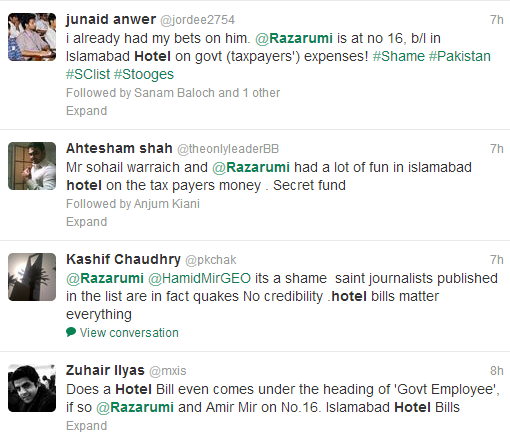 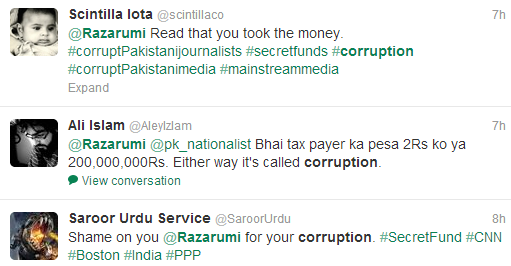 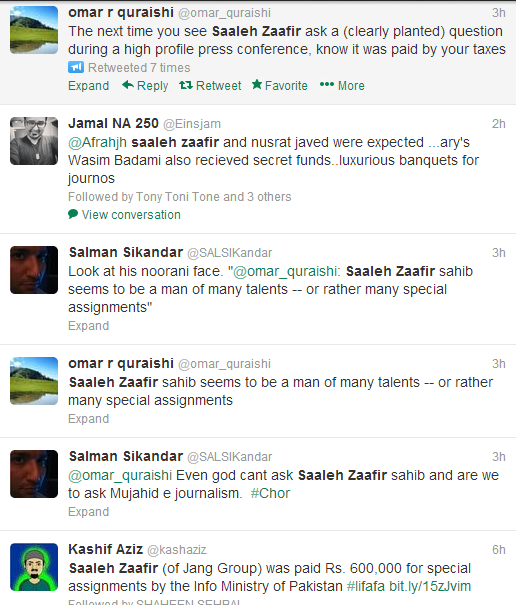 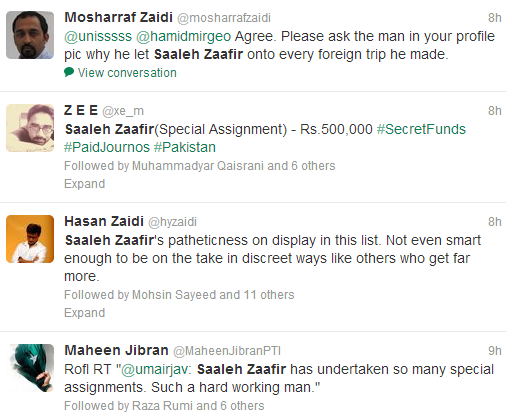 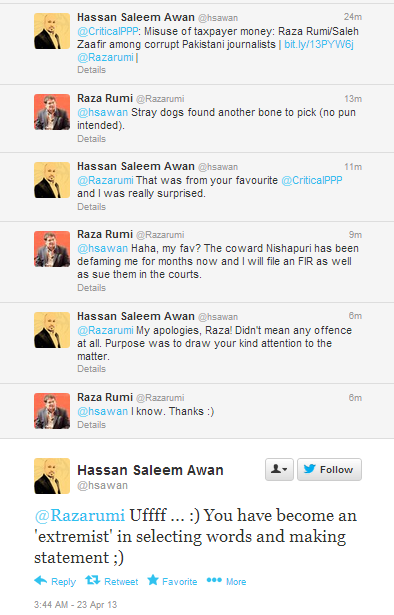