Home  »  Featured • Original Articles   »   Does Boston Bombing Embody a Lesson for the Muslim Parents in the West? – By A Z 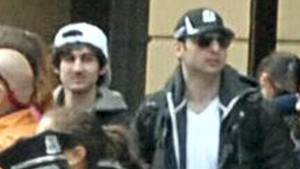 At this year’s Boston Marathon Islamist terrorists chose to have a blast at the expense of innocent and unsuspecting participants. It may be pertinent to explain that the Boston Marathon is no ordinary event. It is the oldest annual marathon in the world which began in 1897. It is always held on Patriots’ Day which commemorates the battles of Lexington and Concord, which were fought near Boston in 1775. Patriots’ Day is held every third Monday of April. The Boston Marathon is one of the six Marathon Majors in the world (the other races being Tokyo, London, Berlin, Chicago and New York) and also the toughest to negotiate.

As the Boston blast blurs the distinction between the terrorism of foreign and domestic origin, I want to make an pertinent observation here. Since Oklahoma bombing by Timothy McVeigh 18 years ago, the American have understood that terror could be home-grown too. But the bombing in Boston makes the line between foreign and domestic terror scarily unclear. It severely undermines the proud American belief that an immigrant of ability and ambition can become American, integrate fully in the society, and work his way to the top. The two Tsarnaev boys have shaken that belief. Let’s hope that the Boston blast is an isolated incident and not the tip of an iceberg, but the question remains how can the Muslims who are (often) born and raised in the West feel such hatred for their fellow citizens that they would plot and kill innocent people. Why do many Muslims feel so alienated from the rest of the society in the Western countries?

The answer probably lies in the fact that many Muslims who were either born in the West as citizens or chose to migrate here pass all their time denigrating the West and its moral values as evil. This however does not stop them from benefiting from the advantages, liberties, and comforts of the Western society. While most of these people usually have a moderate attitude towards life and religion, their outlook, nevertheless, represents current intellectual and theological thinking in Islam. Instead of developing an outlook that is based on an informed understanding of Islam in its current and multicultural context as evolving to address the needs and issues of modern age in a way that is spiritually correct, they often adopt an approach that negates progress and diversity by becoming more conservative and isolationist. The quest for identity is a normal phenomenon in the struggle of a generation for a place in the dominant society, but the rigid manner in which this quest for identity often gets distorted –especially post 9/11- is surprising.

What these people fail to realize is how their attitude affects their younger generations. It is a pity to imagine the identity dilemma of these kids brought up in a Western environment who have been encouraged by parents, tight groupings, and extended family to dis-identify with ‘Western’ cultural and political contexts and to imagine themselves as being from somewhere else (Chechnya, Iraq, Palestine, Bangladesh, Pakistan etc.) Some of this is natural as the struggle of a new generation to find a place in a dominant society, though made more conspicuous by the fact these Muslim youth of immigrant parents are more ‘diverse’ in colour, names, religion, and culture than most other immigrants. What further exacerbates it is that on one hand the political situation in the West since 9/11 constructs Islam as an enemy and on the other hand at home these kids are given lessons in a litany of injustices of the West against Islam. Sometimes ‘identity Islam’ is also pursued as a refuge from the perceived or real ‘racial rejection’. No wonder the idea that they are in fact the superior ones, and different from the morally corrupt and evil society around them, rings pleasant to some of these young ears whereas their parents feel smug that they have resolved the immediate threat of assimilation into Western culture by keeping their youth on the right path and proud of it. Little do these parents realize that by abetting the process of this simultaneous alienation from the Western culture and from the culture of their idealized place of origin, they are setting up their kids for the embrace either of a culture-free Islamic militancy or of crime and drugs. As we know, one of the major characteristics of political Islam is the rejection of culture with the ideological premise that the ‘true Islam’ is above everything cultural. It is pristine and is politically capable of establishing a utopian state where everyone is contented and honest and which if imposed on humanity can make the world a better place. These revivalists often dominate Muslim organizations and mosques by dint of their dedication, strong networks, material support particularly from the Gulf Arabs, and a clear ideological agenda.

The problem of alienating the kids from the culture and political context of their Western abode is a deep rooted one. I am amazed by the number of sites in North America that warn Muslim youth against the evils of a Western cultural factors such as prom nights, Halloween, celebrating the birthdays as the manifestations of paganism. The sense of cheerleading that goes on in most of Muslim youth events is sustained by a cultural and religious arrogance ingrained in them by their elders and Muslim religious organizations. Unfortunately most of them have very superficial knowledge of Islam and are ready to welcome and follow, without analysis or examining the context, any discourse purporting to be Islamic.  A fear of being co-opted by the Western university system leads some of these young ideologues to a fascination with madrassa style religious learning. Online mullahs and the ‘sheikhs’, in robes and turbans, living in the West provide them with authoritarian certitude that they are looking for.

In my observation it hard not to feel sorry for the kids whose parents are often guilty of bringing them up in a context where they continue to see themselves from somewhere else (Pakistan, Iraq, Iran etc.) even though they have not the slightest possibility or inclination to make it as authentic citizens of their imagined homeland. Their parents expect them to be model Muslims in their own mould and to accumulate worldly gains by entering the most lucrative careers. Many of the Muslim kids are taught to pursue technical fields, applied sciences, business, and medicine as these are viewed as less corrupting than the humanities and social sciences subjects as they prefer to avoid the issues of interpretation raised by the humanities and social sciences which may challenge their understanding of Islam. No wonder this under-involvement in the humanities and social sciences by Muslims undermines the community’s ability to articulate its place within the mainstream society. I am glad to see that a wide majority of these youth manage to configure their personal symmetry amidst these conflicting cultural demands and contexts, but I do feel for those few who go astray and seek refuge not only in militant Islam but even more often in crime, gangs, and drug use. It seems that the elder Tsarnaev brother was one such case who then led astray his younger and impressionable brother.