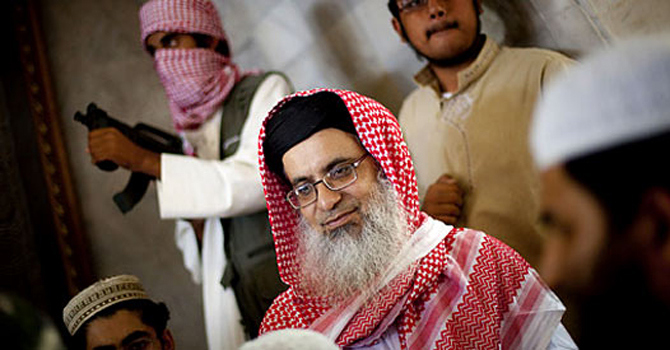 Someone please forward a copy of this to His Holiness Highness Hazrat Iftikhar Chaudhary (HHHHIC) aka Abu Arsalan. HHHHIC and his Chacha Supremes must be so proud of reading this as they have always shown a soft corner for Lal Masjid. Lal Masjid was an important part of the Lawyer’s Movement. This movement was lead by Aitzaz Ahsan, Asma Jehangir, General Hamid Gul, Honda Civic Society, Roedad Khan, Sipah Sahaba, Lal Masjid Fan Club, Jamaat Islami, Comrades and Budding Jalibs of the Sharif Brothers, Hazrat Imran Khan, Tahira Abdullah, Candle Light Liberals, Leftists, Communists etc. Advocating IN FAVOUR of Lal Masjid and its innocent suicide bombers was a central plank of this Great Movement. Abu Arsalan (HHHHIC) and His Supreme Court Chachas made sure that Lal Masjid oppressed got damages payment from the Government. Now all this has bourne fruit

ISLAMABAD: The Lal Masjid administration has more than 10,000 suicide bombers on the mosque premises and more than one lakh across Pakistan, claimed Khateeb of Lal Masjid, Maulana Abdul Aziz.

“The suicide attackers are ready to operate anywhere/anytime in Pakistan,” he said at a press briefing at the Lal Masjid on Wednesday evening. “We consider suicide attacks are right in Pakistan in few circumstances, while we consider them as absolutely justified in the context of Afghanistan and Iraq,” he said. “Our students enjoy the moments when a police or Rangers operation looms, and they get bored when the situation normalises,” he said of the situation inside Lal Masjid. He said, “We favoured the Taliban not only in the past, we favour them even today.”

Responding to a question that the strategy adopted by the Lal Masjid administration to solve different problems was helping Musharraf’s agenda to bring liberalism in the country and that analysts think that the clerics were operating on the direction of agencies and basically helping the regime to achieve its agenda, he said it was totally wrong.

“We are not operating under the command of some agency, and I am ready for ‘Mubahela’ in this regard,” he added. He said the Musharraf government was not taking any advantage to fulfil its agendas from the actions of the Lal Masjid.

However, at this moment Aziz’s younger brother Maulana Abdul Rasheed Ghazi took the mike from him and further elaborated the answer saying, “Sometimes it happens. Someone takes advantage from some action, which is actually not aimed to support him.”

He said: “When we were fighting against the USSR, the US had taken advantage of the situation. Our struggle against the USSR was not aimed to benefit the US, but they took an indirect advantage of our struggle.” He also cited the example of the war of Muslims against Persia which indirectly benefited the Romans.

Aziz also disclosed that Gen (retd) Hamid Gul had told him during a conversation that according to the Constitution, any citizen of Pakistan can play the role of a ‘law officer’ if he observes some illegal activity somewhere and not find law-enforcement authorities there.

The Lal Masjid cleric said that not a single finger was cut during their peaceful movement. Asked why the administration did not do something for the poor and depressed class of society and confined its version of Islam to CD shops and brothels, the cleric said they could not do anything for improving the condition of the poor with their resources. However, they could stop people from doing wrong. “We are doing what we can do,” he added.
http://www.thenews.com.pk/TodaysPrintDetail.aspx?ID=8218&Cat=13&dt=5%2F31%2F2007