Perks of being a Saudis follower: Shareefs gifted with 20 bullet-proof vehicles 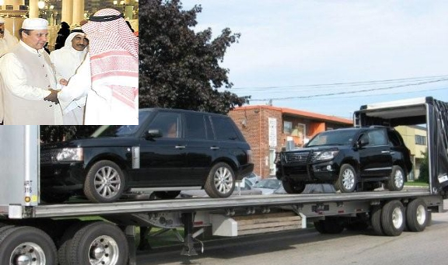 Mian Nawaz Shareef and his party’s silence over the return of former President and Army chief Pervez Musharraf has been highlighted at the media and social media. The role of Saudi royal family is known to everyone.

Saudi Government has always come to the aid and support of Shareef brothers. In exchange Mian Sahib has mended ties with the Saudi backed and funded Anti-Shia militant outfit ASWJ/LeJ and enjoys cordial relations with Tehreek-e-Taliban Pakistan and its Punjab chapter comprising LeJ, JeM and HuJI.

The concessions made to these killers by electoral alliances as well as allotting party tickets to ASWJ members and affiliates have been paid off. The royal family has gifted Mian brothers a fleet of bullet-proof vehicles for their electoral campaign.

ISLAMABAD: With the file work in progress, the Pakistan Muslim League-Nawaz (PML-N) leadership will soon be getting a ‘gift’ of 20 bullet-proof vehicles from the Kingdom of Saudi Arabia to run its campaign for the upcoming elections.
Sources in the Interior Ministry told ‘The Spokesman’ Monday that the Ministry has cautiously granted ‘No Objection Certificate’ (NOC) to the PML-N for the ‘import’ of 20 bullet-proof vehicles gifted by the Saudi Kingdom to the party leadership. Five vehicles would be used by the Sharif family and 15 others would be in the use of the party leadership as it is finalizing country-wide election campaign.
The sources said that initially the Interior Ministry took the case of 20-vehicles as a ‘contribution/donation’ by a foreign government to the political party; PML-N, which is prohibited under the election laws. But as the party insisted to treat the matter as a ‘gift’ by the Saudi authorities, the Ministry granted the NOC in this regard but left it to the Election Commission of Pakistan to decide whether it could be considered as a ‘gift’, the sources added. (Source)

It must be noted that there were no threats to the leadership of PMLN from any of the terrorist outfits, as only ANP, PPP, MQM and QWP leadership, ex-parliamentarians, candidates for the upcoming elections, activists and supporters are under threat.

It will be part of Mian brothers copying royal standards of living at their estates, as if men with the guns are tempted to attack the rivals and the persecuted ones among the people, then why the hell do you need a bullet-proof vehicle at all?

5 responses to “Perks of being a Saudis follower: Shareefs gifted with 20 bullet-proof vehicles”