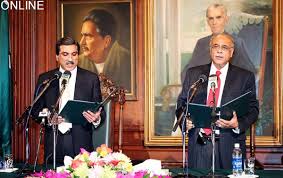 “Journalists should stand apart from institutions that make news.”

The above advice contained in The New York Times Company Policy on Ethics in Journalism reflects an institutional maturity that still remains elusive for many publications and their editors in Pakistan. The policy goes on to add: “…journalists do not take part in politics…No staff member may seek public office anywhere. Seeking or serving in public office violates the professional detachment expected of a journalist. Active participation by one of our staff can sow a suspicion of favouritism in political coverage.” Absent the existence of such guidelines for many journals in Pakistan it usually is the conduct and advice of the editor and his/her discretion that may serve as a benchmark for the younger generation to emulate.

Appointments made to unelected public offices with bipartisan consensus are not apolitical and remain highly politicised engagements, perhaps even a notch above the partisan politics where one’s political leanings are clearer. Journalists, of course, are free citizens and can aspire for and occupy any public office. However, once they do make the decision to take high office, they — more than a run-of-the-mill politician — must realise that scrutiny and criticism of their actions comes with the territory. Stonewalling or pooh-poohing such criticism directly or indirectly usually entails a harsher, closer inquiry and are hardly a deterrent, especially in the presence of a vibrant social media and citizen journalism.

Historically, appointments to interim and/or caretaker setups — including that of journalists — even though the result of intense wheeling dealing, have been politically inconsequential and are hardly remembered a few years down the road save for their shortcomings, abuse of office or hounding of political opponents. And even when the best of intentions have been the force behind journalists accepting public office, it has been frowned upon for the simple reason that use of the media clout by a few can cast aspersions on the immaculate work of newsgathering, reporting and writing by scores of other media men and women. Loss of objectivity remains a serious concern regarding those who make a move from journalistic to political careers and impugns their past and future work should they opt to return to journalism. Journalism, like medicine, can be the noblest of professions or meanest of trades depending upon whose service it is deployed in.

In a recent article, the veteran Urdu columnist Mr Nazir Naji (writing on acceptance of caretaker Chief Minister’s position by Najam Sethi) has given a historical overview of Pakistani journalists moving onto the greener pastures of politics. But the press in Pakistan has not always been about land plots, perks and privileges. Indeed, there is a long history of persecution of newsmen long before junkets and favours arrived on the scene. The English, Urdu and regional languages press and its persecution antedates Pakistan. In fact, the grandfather of the English press in the Indian subcontinent, James A Hicky, who brought out the first English language journal, the weekly Hicky’s Bengal Gazette aka Calcutta General Advertiser, was the first India-based journalist to have the postal service denied to his publication, confiscation of his press, and eventually being imprisoned for taking the rulers of the era — the East India Company — to task. Hicky went from press to prison in about two years after founding the Gazette in 1780.

The first ever Indian-owned journals brought out by the venerable Raja Ram Mohan Roy, viz Mirat-ul-Akhbar (Persian), Sambad Kaumudi (Bengali) and the Brahamanical Magazine (English) were also the first Indian-owned papers to draw the rulers’ ire. The Mirat-ul-Akhbar was slapped by the acting viceroy John Adam in 1823 with what became known as the Adam’s gag and, thereafter, the newspapers were mandated to seek government permission for publication and declare the names of the owner, publisher and printer, known since then as a ‘newspaper declaration’ that has required approval of the governments that succeeded the British. Not unlike their predecessors, successive Pakistani governments revoked declarations of the newspapers they did not like.

One would be remiss not to recall Maulvi Muhammad Baqir, the first newspaper editor who was martyred in the aftermath of the 1857 freedom struggle solely for the journalistic position he took during the campaign. Baqir, a classmate of the court poet Sheikh Ibrahim Zauq and father of the legendary Urdu writer Muhammad Hussain Azad, was the owner and publisher of the Delhi Urdu Akhbar, the first Urdu journal ever brought out from north India. On the eve of the 1857 movement, Baqir took the fateful decision to side with the freedom fighters to the extent that he renamed his weekly as Akhbar-uz-Zafar or the news bearer of victory, eponymously after the last Mughal ruler Bahadur Shah Zafar. Baqir was summarily sentenced to death and killed by a British firing squad after the fall of Delhi.

The pre-1947 press was in a revolutionary mode and many leaders of the second freedom struggle made it a point to remain associated with journalism. Muhammad Ali Jauhar, Abul Kalam Azad and Hasrat Mohani were all jailed and fined for their journalistic activities. In addition to jail time, Hasrat even had his personal library confiscated for non-payment of the fine levied on him when he refused to disclose the real name of a contributing writer. Gandhi-ji, Badshah Khan and, of course, Quaid-e-Azam M A Jinnah brought out or helped bring out periodicals. The Quaid’s defence of the anti-colonial editor of the Bombay Chronicle, Benjamin Guy ‘B G’ Horniman — and a free press — is a tale that needs to be told in detail. Suffice it to say that none of these pioneers put their trade in the service of their personal ambition. The edifice of the free press in Pakistan is erected on the blood and toil of such greats. Those Pakistani journalists who suffered and even perished at the hands of military dictators also belong to this league apart.

James Silk Buckingham, a contemporary of Raja Roy and one of the pioneers of press freedom in India had defined the objectives of his biweekly Calcutta Journal as “to admonish governors of their duties, to warn them furiously of their faults and to tell disagreeable truths.” Partaking in the business of the state and governance makes telling the disagreeable truths and holding the rulers’ feet to the fire extremely difficult if not outright impossible. Seasoned journalists and mature publications try to avoid even the perception of such conflict of interest.