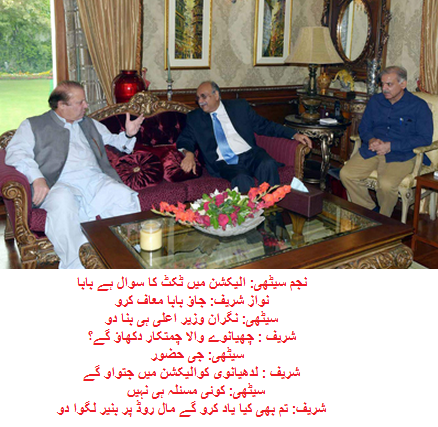 Lahore, 4 April 2013: Two weeks after the dissolution of the Punjab government, the caretaker administration led by Chief Minister Najam Sethi has not yet ordered the withdrawal of a staggering number of 317 police commandos of the Punjab Elite Force who continue to provide VVIP security to Nawaz Sharif, Shahbaz Sharif and their family members in flagrant violation of the laid down rules and regulations.

While 100 highly trained Jawans of the Elite Force keep guarding Nawaz Sharif against the sanctioned strength of 12 people which he is actually entitled to as a former prime minister, 95 others are protecting Shahbaz Sharif despite the fact that he is entitled to only eight security guards being a former chief minister.

According the official data of the Punjab home department, a copy of which is available with The News, around 70 percent strength of the total Elite Force personnel in Lahore is still deployed to provide fool proof security to the former VVIPs of the Punjab, with 50 percent of them guarding and escorting Nawaz Sharif, Shahbaz Sharif, Hamza Shahbaz, Salman Shahbaz, Nusrat Shahbaz, Tehmina Shahbaz, Maryam Nawaz, Captain (retd) Mohammad Safdar, Imran Yousaf and others.

The Punjab Elite Force was launched in 1997 as a counter-terrorism unit of the Punjab Police, with the prime purpose of carrying out high-risk raids and rescue operations that are hard to be carried out by the regular police force. However, with the passage of time, the scope of the Elite Force was widened and it was also made responsible for the protection of the ‘very, very important persons’ (VVIPs) including the president, prime minister, governors, chief ministers and foreign dignitaries. The total strength of the Elite Force in the Punjab is 5,775 personnel, which includes 967 members of the Lahore Elite Police. Of these, 665 policemen have been deployed to protect the families of the former chief ministers, prime ministers, governors, judges and others, including foreign nationals, especially the Americans.

According to the deployment break-up of the 967 Elite Police commandos in Lahore, 100 men [along with eight official vehicles] are at the disposal of Nawaz Sharif for his personal security despite the fact that being a former prime minister he is only entitled to have access to two security vehicles and a maximum of 12 Elite Force personnel. The 100 policemen who still provide security to Nawaz Sharif include one sub-inspector, 32 head constables and 67 constables. In fact, the elder Mian Sahib is enjoying this security for the last five years in the aftermath of the 2008 general elections and the subsequent formation of his party’s government in the Punjab, in a clear violation of the rules.

According to the official data, former chief minister Shahbaz Sharif has 95 personnel of the Elite Force at his disposal [including 27 head constables and 68 constables as well as eight official vehicles] for his personal security, with another 40 men deployed at the Raiwind Farm House of the Sharifs. This is despite the fact that being a former chief minister, Shahbaz is only entitled to eight security personnel, as is the case with another former chief minister Ch Pervaiz Elahi. Nawaz Sharif’s daughter Maryam Nawaz Sharif and her husband Captain (retd) Mohammad Safdar are still being guarded by 12 men. Shahbaz Sharif’s elder son Hamza Shahbaz Sharif has 15 commandos of the Elite Force at his disposal while his younger brother Salman Shahbaz has seven.

While the caretaker Punjab Chief Minister Najam Aziz Sethi has been provided 11 police commandos of the Elite Force, former chief minister Shahbaz Sharif’s former secretary Talha Burki and his former secretary coordination Tauqeer Shah are still being provided security by eight and four police commandos respectively, though both of them were never entitled to any such concession. Former Lahore High Court Chief Justice Khawaja Muhammad Sharif, who is close to the Sharifs, has four commandos at his disposal while 27 more provide security to Chief Justice Lahore High Court Umar Atta Bandial. Eleven police commandos of the Elite Force provide security to the family members of the Chief Justice of Pakistan Justice Iftikhar Mohammad Chaudhry, especially Arslan Iftikhar Chaudhry.

Nineteen Elite Force men are guarding former Prime Minister Yusuf Raza Gilani and his family members in Lahore, although he is entitled to 12 security personnel. While Punjab Governor Makhdoom Ahmed has 34 commandos at his disposal, the former Punjab Governor Salmaan Taseer’s family has 13 personnel deployed at their Cavalry Ground residence. It may be recalled that Malik Mumtaz Qadri, the fanatic bodyguard who killed Taseer in Islamabad in January 2011 was a member of the Punjab Elite Force. Former Prime Minister and the Pakistan Muslim League (Quaid) President Chaudhry Shujaat Hussain, former Deputy Premier Chaudhry Pervaiz Elahi and his son Moonis Elahi, enjoy security cover of 17, eight and six Elite Force commandos respectively.

While 26 policemen guard the American Consulate building in Lahore, 12 more provide security cover to the Indo-Pak Dosti bus. Inspector General of the Punjab Police and the Capital City Police Officer Lahore are guarded by 10 Elite Force personnel each. While 665 of the total 967 jawans of the Elite Force in Lahore are still deployed to protect the families of the influential people, 300-plus commandos are either on leave or enrolled in different police training courses. This leaves a grand total of around 100 to protect the citizens of Lahore from the rising wave of terrorism, which was the original responsibility of the Elite Force when it was formed in 1997.

Approached for comments, a spokesman of the Punjab Police confirmed that over 300 personnel of the Elite Force continue to provide security cover to the Sharif family. To a question, he conceded that around 200 Elite Force men continue to guard Nawaz Sharif and Shahbaz Sharif, although they are officially entitled to only 20 security personnel. However, Rai Tahir, head of the Police Operations wing in Lahore who is also in charge of the Punjab Elite Force, said the massive security cover to the Sharif family was provided by the previous chief executive of Punjab and it could only be withdrawn by the current provincial government.

Asked as to why the Punjab caretaker chief minister has not yet ordered the withdrawal of the massive security cover provided to the Sharifs, Director General Public Relations (DGPR) Punjab Amjad Hussain Bhatti said: “The Elite Force personnel are guarding them because of the serious security threats they face. However, let me assure you that the caretaker administration under Najam Sethi will not give any undue favours and concessions to anyone, come what may. The excessive deployment of the Punjab Elite Force personnel for security of the Sharif family members will be taken up with the police hierarchy of the Punjab and the undue staff will be withdrawn within 24 hours”.