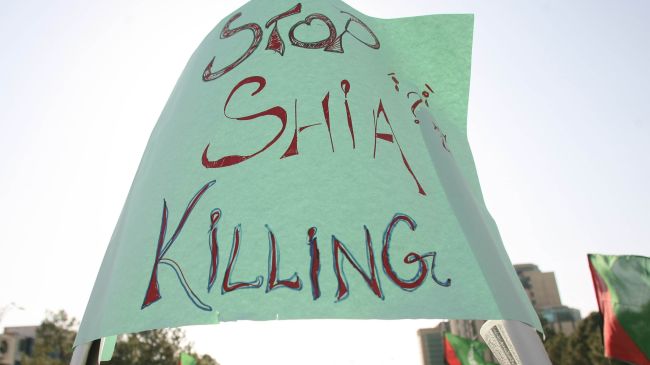 While we are talking to each other, there is an old mother sitting in the corner of her house; silently weeping the death of her young son, there is a weak and helpless father struggling to earn some money as the family’s sole bread winner is no more.

A young man is forced to quit his studies and his dreams, for his brother who promised to educate him is assassinated.

Imagine a young widow with one child in the arm and explaining to the other, that from now on he has to learn to go hungry to bed. I wonder what she will tell her children when they cry for more bread. I wonder what she will tell the little kid when she asks for her favorite candy…Statistics can’t explain the untold sufferings of millions of Pakistani Shias who are either orphaned, maimed, killed or have lost their loved ones. Newspapers can only tell us the number of people that have lost their lives to bullets and bombs, but what about the victims’ family members who have to die every moment of their life?

According to figures; in the last decade, around twenty thousand civilians and five thousand security personnel have lost their lives in Pakistan. Since the beginning of 2013 alone, around one thousand innocent people have been killed. We read about bomb blasts, shootings, target killings and on-camera slaughters on an almost daily basis. Hundreds of Shia scholars and professionals have been targeted in the last few months; the latest victim of this cowardly act is Advocate and Professor Sayed Sibte Jafar Zaidi, Principal of Liaquatabad Degree College, Karachi.

The situation is spiraling into a humanitarian crisis with each passing day and if appropriate steps aren’t taken now, we all will have to regret in the near future.

In the present context of Shia genocide in Pakistan, it was the blood thirsty and power hungry General Zia Ul Haq, who laid the foundation of Shia killings in Pakistan in 1980s. It was general Haq who started systematically arming and funding terrorist Wahhabi organizations like Sippah e Sahaba to wipe out the Shias of Pakistan and the mayhem created by him is destroying Pakistan till today. One of the reasons he initiated and supported this awful act was to achieve his dream of turning Pakistan into a Sunni Islamic state and to contain the growing influence of Iran and Shias around the world. Being neighbors, it was natural that the Islamic revolution in Iran would affect the youth and the general population of Pakistan the most. The victory of the Islamic revolution was not just a victory of or for Iranians; it was a victory of all the oppressed classes of the world. It gave a chance and a voice to the Shias to defend their beliefs and ideologies in the eyes of the world.

Naturally, this was a direct threat to those who stood to lose. General Zia ul Haq knew this well and so did the Saudi ruling elite and their masters in Washington, London, Tel Aviv and other parts of the world. The next logical thing to do was to weaken the Shias to such an extent that neither will they influence others with their ideology, nor will they dare to stand up against the ruling elite.

With the blessings of the ideologically corrupt western governments and their puppets in the Arab world, organizations like Sipah-e-Sahaba Pakistan (SSP) aka Ahl-e-Sunnat Wal Jamaat (ASWJ), Lashkar-e-Jhangvi (LeJ), the Tehrik-i-Taliban Pakistan (TTP) continue the bloodshed in Pakistan. Additionally, the extremist Wahhabi terrorists (oops! I meant clerics) play a very important role in this entire fiasco, the labeling of Shias Muslims as Kafirs(unbelievers) and encouraging the Wahhabis to kill them for heaven; offers an incentive to the already insane Wahhabis.

Motives behind the killings

The downfall of Muslims is not due to the strength of their enemies but because of the division and discord amongst their own selves. One of the major goals of the attacks on the Shias is to stir up hatred for their Sunni brothers and vice versa. But the Muslims of Pakistan and world over are coming to realize that it is neither Shia nor Sunni but the enemies of Islam who are killing innocent people and destroying the very fabric of Islam.

Curb the growing influence of Iran and the Shia ideology

One of the biggest fears of hegemonic governments is the growing influence of Iran and the Shia ideology throughout the world, unfortunately for the enemies of Islam, Shia Islam is completely the opposite of the American and Talibanized version of Islam that the world has been fed since 9/11. Washington and their cronies assume that by killing people they can kill an ideology.

Imam Khomeini once said about the terrorist attacks in Iran, “They have lost all logic, for if they had any logic they would have sat down and spoken to us”

I wish these fools realize that one can’t achieve success by killing and murdering people, if killing and murdering really did so, then we would have known George W. Bush, Tony Blair and Saddam as the most successful people of the century and not as notorious war criminals…
For those who hate the Shias, you need to know that they are followers of Ali(a.s) who said: “You have two kinds of brothers; one is your brother in faith and the other is your brother in humanity, be merciful to both of them as you would want Allah to be merciful to you.”