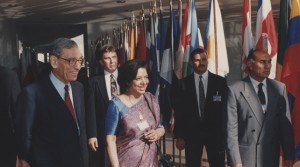 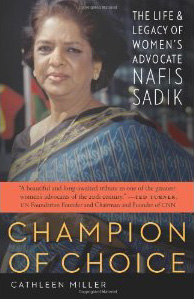 Nafis Sadik has been called one of the most powerful women in the world. One of the greatest women’s advocates of the twentieth century, Nafis is an obstetrician, author, mother, and global thought leader who, for decades, has emphasized the importance of sexual and reproductive health and rights as a means to women’s empowerment. She was the first female leader to direct a UN agency as the Executive Director of the UNFPA and is also a former Pathfinder International board member.

A biography of Nafis, Champion of Choice: The Life and Legacy of Women’s Advocate Nafis Sadik by Professor Cathleen Miller, hit bookstands in February 2013. In honor of Pathfinder’s “Women Who Dare” series, we spoke with Nafis to learn more about her career, inspiration, and her take on what being “daring” really means.

You have committed your career to advocating for women. What initially inspired you? Did you consider it ‘daring’ at the time?
In some ways, yes. I wanted to address issues that were taboo—issues like women’s reproductive rights. I’m pleased to say that when I became Executive Director of UNFPA, I had the stage to talk about sexual and reproductive health.  And people started listening and paying attention. Occasionally people would advise, “You shouldn’t say this or you shouldn’t say that,” but any discrimination or issue of human rights has to be talked about.

For instance, the issue of abortion. The United Nations didn’t want to talk about it. I put it on the table [at the International Conference on Population and Development] in Cairo in 1994 and said we must address unsafe abortion. There was huge uproar about that. Many top advisors discouraged [discussing abortion], but my view is that we have to talk about it. It’s only when you make an issue public and it becomes socially unacceptable, that you can really make a change.

Have you ever shied away from making a powerful statement for fear of challenging the status quo?
I used to consider whether or not to say things, but unless I speak out, who else is going to point out the difficult issues? I developed an attitude that no matter the issue, if I was in a position to make a difference, I would speak out. Lots of organizations and people would advise me to be careful or not speak out. Even women’s groups would caution me against saying certain things. But we must.

What changes have seen in the global rights landscape during your career?
Many things have happened that you wouldn’t have thought would change. It’s been a gradual process. People are being   much more receptive to areas like improving sexual and reproductive health, advocating for women’s education, and fighting gender-based violence. Until the 1980s, these areas were taboo in the United Nations. Even in the 1990s when we did the [International Conference on Population and Development], they used to say, ‘these are political issues,’ but I used to say, ‘they’re also scientific issues, these issues are affecting women’s lives.’

What are some of the biggest challenges you still see in the sexual and reproductive health and rights field?
You have to be courageous and fearless. Not to be intimidated. If you see discrimination or [someone] being oppressed, you must speak out.We’re not making enough progress on sexuality because it’s quite a difficult subject. People don’t want to talk about it. One challenge is getting it on the agenda. Some believe women shouldn’t know anything about their sexuality and that girls should be ignorant or they will become promiscuous. Adolescent education on reproductive rights is so controversial. Of course, many countries are making progress; we must keep at it.

There’s been a backlash on reproductive health and family planning, even in the US. Women are being denied their rights to make decisions. In the states, we were very progressive on abortion, but now that’s getting pushed back. The best way to prevent abortion is to improve access to and information for contraception. But that’s getting scaled back too. We need to work both in developing countries and developed countries. The challenge to these issues are so ingrained, that even if we progress, one always has to be on one’s guard to make sure things don’t get set back again.

Was there ever a time you saw another woman daring to challenge, change, or take on something that inspired you?
[Assistant Secretary General of the United Nations Helvi Sipilä] did the first World Conference on Women in 1974. She had this concept that family planning had a central role to play in women’s empowerment. She was quite fearless. At the conference, some of the women were not in support of family planning, and she said, ‘we must address this, we must support their rights, we must put family planning into this.’ I was quite impressed with her forwardness. She had a very strong influence on me.

If you had one piece of advice for those who want to dare to make a difference for women, what would it be?
You have to be courageous and fearless. Not to be intimidated. If you see discrimination or someone being oppressed, you must speak out. You must do this in a way that’s not too confrontational, but you must have the courage to speak out. You must not worry about what people are going to say. Evidence is the best way to support action. You must have evidence.

This post is part of Pathfinder’s “Women Who Dare” series in celebration of International Women’s Day 2013. Read more stories of daring women and learn how you can take action at www.pathfinder.org/WomenDare.