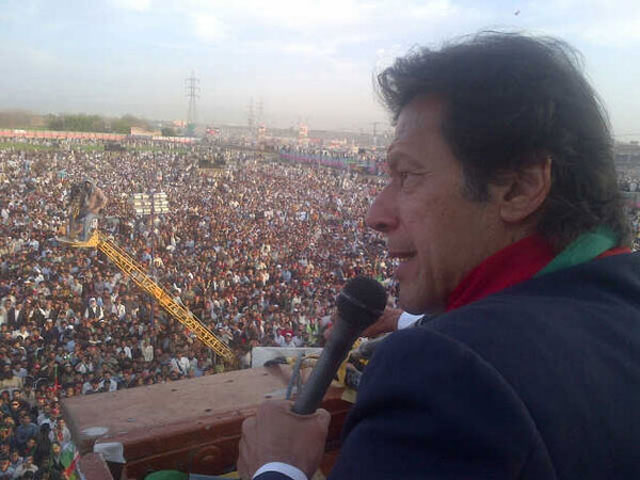 Peshawar: Pakistan Tehreek-i-Insaf (PTI) Chairman Imran Khan condemned the Joseph Colony (Lahore) attack on Christian community and said if the Punjab government had caught the Sipah-e-Sahaba (ASWJ) terrorists in Gojra, then this attack could have been avoided altogether.

Imran was addressing a mammoth rally of PTI (Pakistan Tehreek-e-Insaf) in Peshawar on Sunday. He blamed the Punjab government for the attack on Joseph Colony, in which a mob set ablaze more than 150 houses of Christians over alleged blasphemous remarks by a Christian sanitation worker.

He also condemned the recent terrorist attacks on Shia Muslims and stated he had a solution for sectarian violence. He also claimed to have the answer to increasing terrorism and said it will be revealed during an upcoming rally.

“If this Punjab government does not make seat adjustment with [ASWJ- Sipah-e-Sahaba] terrorists then terrorism can be curbed. They [PML-N] only care about ‘the chair’, whatever comes along they do not care,” the PTI Chairman said.

Imran Khan said: Shia brothers are going through deep pains and miseries, I strongly condemn their genocide at the hands of Takfiri terrorists, we will end sectarian killing of Shia Muslims in Pakistan.

Imran said he will unveil the PTI manifesto on March 23 during their Lahore rally to be held on the grounds of Minar-e-Pakistan. He said, “The manifesto will explain how we [PTI] will build Naya Pakistan [New Pakistan].”

He reiterated that corruption and tax evasion is the cause for Pakistan’s failure as a nation.

“We are the first party who asked each and every member to declare their assets and we have put up the results on our website,” Imran said.

Attacking political dynasties, the PTI Chairman said, “We [PTI] do not want to become a Family Limited Company.”
“The day my party members elect Suleman Khan [Imran Khan’s son] as the party leader, I will resign,” he declared.
Further attacking the political dynasties of Pakistan he said, “In all these years, they [politicians] haven’t made leaders but made children.”