Editors note: Otherwise a good article. While Huma Yousaf states the Hazara identity of killed Shias, what stops her from stating Deobandi identity of ASWJ killers? Is Sunni-Shia sectarian violence an apt term for #ShiaGenocide in Pakistan? 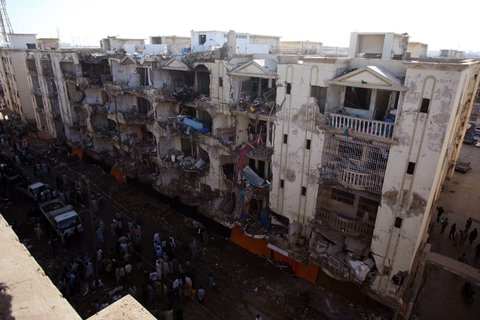 LONDON — On Sunday a bombing in Abbas Town, a predominantly Shiite neighborhood of Karachi, killed 48 people and injured almost 200. Although it was just the latest incident in a sinister trend of sectarian violence in Pakistan, the attack prompted a swifter political response.

Within an hour of the attack, television channels contrasted the absence of police officials in Abbas Town with a disproportionate deployment of policemen at a politician’s engagement party across town. The funerals of the bombing victims, which were attended by thousands, were broadcast live with few interruptions.

Photographers streamed to the blast site to document the scale of thedestruction. All week, journalists stationed there have encouraged residents to air their grievances. Several late-night political talk shows have debated the causes of the tragedy. The media is providing regular updates as the gruesome task of identifying corpses in the rubble continues.

Compare this with coverage of the attack in January against Hazara in the southwestern city of Quetta. The victims’ families tried to call attention to the 92 dead by refusing to bury their own, but they received scant media attention. Instead, a protest march in Islamabad led by a cleric calling for electoral reform dominated the airwaves for days.

The difference in coverage is understandable: Karachi is Pakistan’s commercial capital and home to the head offices of most major media groups. The city crawls with full-time journalists. Baluchistan (of which Quetta is the provincial capital) and the terrorism-hit northwestern province of Khyber-Pakhtunkhwa have few official bureaus, and most journalists there are freelancers who have to watch their backs. These are also the areas where the Pakistani Army is engaged in military action against militant groups, and therefore is more careful about monitoring media coverage.

For example, on Tuesday, a program about the security situation in Baluchistan by the senior television journalist Hamid Mir appearedscrambled or was blocked in much of Pakistan. Most likely, the state had pressured cable TV operators, who distribute independent channels, to censor such sensitive programming.

Coverage is also influenced by business considerations. Almost 70 percent of urban residents in Pakistan can access privately owned cable or satellite TV channels, compared to only 11 percent of people in rural areas. Karachi, in particular, receives concentrated media coverage because it is home to half the country’s 700 “peoplemeters,” the audience measurement tools that generate ratings on which advertising prices are based.

Disparities in coverage are no small matter; as the fallout from the Abbas Town bombing shows, media attention can prompt change. The city government has announced prompt compensation for those affected by the blast. The local electricity provider has waived all charges for Abbas Town residents for six months.

Moved by the upsetting images emanating from Abbas Town, Karachiites have organized candle-light vigils, drives to collect food and clothes andglitzy benefits to support the victims’ families and people made homeless by the blast. Almost a week after the attack, public outrage is mounting, not dissipating.

Whereas few politicians bothered to express condolences in person to the victims’ families in Quetta, they descended on Abbas Town in droves. On Monday, residents even chased away a member of Parliament, criticizing her for visiting the locality simply to secure airtime on a news channel ahead of elections in May.

Facing tough questions in the media, various politicians are blaming one another for the security lapse that led to the bombing. Karachi’s largest political party, the M.Q.M., called a strike to protest the attack.

For all its flaws — sensationalism, poor ethics and corruption — Pakistan’s media can make things happen. Too bad it doesn’t use that power more to pressure the state.