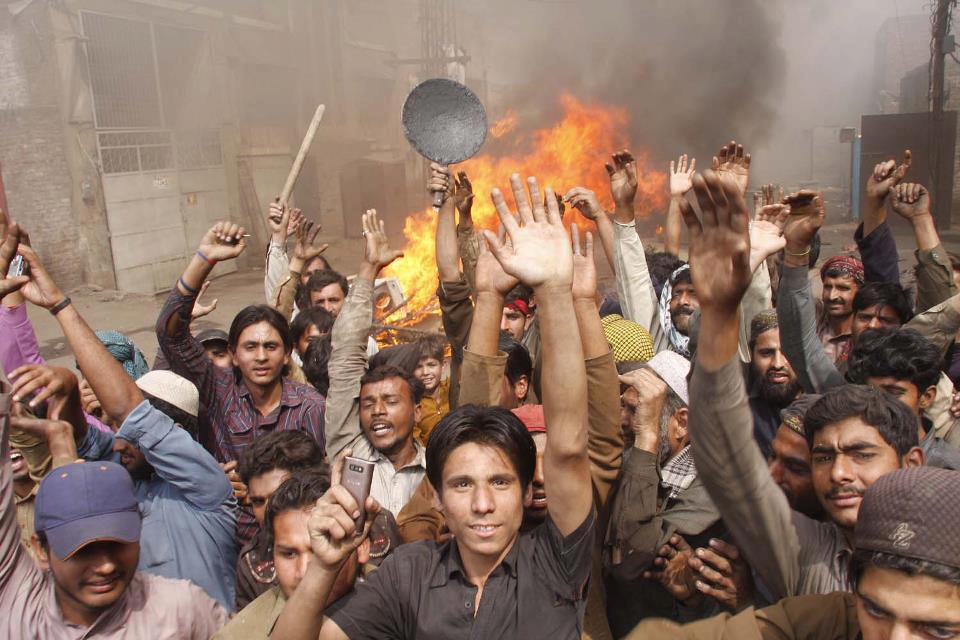 The show goes on as the zealots put up a great performance in Lahore today.

Hope you enjoy watching, even if you can’t be a part of the cast.

An entire neighbourhood of Christians in the mega polis of Lahore was set alight today because a raging mob suspected one individual of some act of blasphemy.

That this incident was orchestrated not by terrorists but by ordinary folks shows why the terrorism finds it so easy to hold hostage a nation where extremism roams freely in the streets. The details of the incident of the blasphemy are not yet known, but in Pakistan those are not relevant as it is not important to establish a crime to burn down an entire Christian neighbourhood – mere accusations suffice.

How do we deal with a society where the blame for genesis of many such attacks can no more be placed squarely at the doorstep of the perceived radicals? What it means is that even violence is no longer a criterion to define who is a fanatic and who is not. There is never a stain on the hands of the perpetrators who kill with wanton and gleefully burn down poor people’s only shelters with their entire life’s belongings. As the minorities and the Shias remain precariously perched on the holiest lance of extremism, it seems clear that no such incident of brutality can decisively jolt the collective conscience of Pakistan. It is as if the society does not really mind seeing the dust turned into ashes.

Crucifix upon crucifix in the Cavalry and Karbala of Pakistan, daggers soaked in blood for the Glory of the Lord. The enemies of life roam the streets as ruthless demons cast from the rocks of certitude.

So, as I wonder where the sun has gone, the show goes on in the night of Pakistan without much tangible hope of morning. Every such episode stirs up a frightful lament for people like us and then we realize that there is nothing in our grasp except making laments night and day. There are no arrows of hope in our quivers to shoot – nothing except laments till we too are taken.

My beloved Faiz once cried out in desperation:

“ This trembling light, this night-bitten Dawn
This is not the Dawn we waited for so long”

My dear Faiz, you were delivered from your misery too soon. In this complete darkness of night, we yearn for the Dawn you so despised. Yes, we yearn for the morning you saw as ‘night-bitten’. Yes, we in the bosom of heavy gloom envy you for having lived in that leprous daybreak – that you described as marked and wounded because the night had nibbled on it. You were laying an ambush for the moon so that you could enjoy a crisp and bright morning and, now see, how we ache for the moon in our dark night. Faiz you were lucky to part singing the hope of a world worth dreaming but no use for us entangling our existence in the mesh of your dreams. For us there is no balsam of life today, only the business of death remains, which our killers can settle when they wish. Faiz, people who are too busy digging up mass graves, are past even caring about their shrouds.

So where do we go from here in a country wallowing in violence and hate in the ocean of religion? A country where the obsession with the history and the hereafter to the absolute oblivion of the present continues to deepen the reach of bias and sectarianism. Where amazingly trivial details of faith are governed by our desire to enhance piety and where our cultural, philosophical, and religious systems are all aimed at promising deliverance in the hereafter, even though by killing or volunteering for suicide bombing. I think, while a war against terrorism can still be won, a victory in the struggle against extremism is where the hope for Pakistan begins. But my life is likely reduced to lamenting as I do not bet on it happening in my lifetime. Any takers?