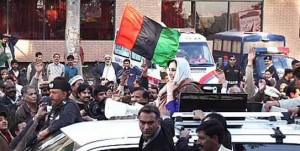 ISLAMABAD: Exactly four years after the brutal assassination of Benazir Bhutto, a letter of Inter Services Intelligence (ISI), country’s top intelligence outfit, has revealed that the extremists groups related to al Qaeda have had their plan to assassinate Benazir Bhutto six days earlier then 27th of December 2007 the day when Miss Bhutto was assassinated, copy of the letter available to Dawn.com disclosed this here on Monday.

The five lines short letter with the subject of , “ al Qaeda Threat,” is addressed to Kamal Shah, the then Secretary of Interior Ministry by Brigadier Abdul Basit Rana.

The letter reads as, “It has reliably been reported that a few extremist groups related to al Qaeda have made some plan to assassinate Mrs.Benzir Bhutto and her adviser Mr Rehman Malik on 21 December 2007.The exact plan of execution not known.”

The letter is delivered to the Secretary Interior on December 10th, 2007, almost seventeen days before the assassination of Benazir Bhutto.

The copy of the letter shows that Kamal Shah immediately wrote a short note on the letter saying, “this is a threat with specific date, we should sensitize them,” Kamal Shah has further directed Brigadier (retired) Javed Iqbal Cheema, the then Director General of Ministry’s National Crisis Management Cell (NCMC) directing him to speak.

The third note which is not readable properly mentions as, “I have informed MrMalik by fax,’ by some Joint Secretary or Brigadier (retired) Javed Iqbal Cheema.

In this letter the specific Intelligence was provided by Brigadier Abdul Basit Rana of ISI, who according to this correspondent is yet not appeared before any investigation committee including the Federal Investigation Agency’s (FIA) Joint Investigation Team (JIT) headed by a grade 20 police officer Khalid Qureshi and the UN Commission on Benazir Bhutto.

“Since this was a top secret information provided by the agency and agencies do not give the access to the origin of the information so neither Brigadier Abdul Basit Rana was interviewed by UN Commission nor by anyone else,” confirmed Ch Azhar advocate, the prosecutor of the Benazir Bhutto murder case in Rawalpindi’s Anti Terrorist Court.

It has already come on the public record that the then Security Adviser of Benazir Bhutto, Mr Rehman Malik soon after receiving the “threat information” from Brigadier (retired) Javed Iqbal Cheema, had written a three page detailed letter to Secretary Interior Syed Kamal Shah on 12th December 2007.  In the said letter he had requested for enhancement of Benazir Bhutto’s security.

An expert, while speaking on the condition of anonymity, say that the examination of Brigadier Abdul Basit Rana and further analysis of the information provided by him can further unfold the missing links of on going investigation of Benazir Bhutto murder case.