Home  »  Original Articles   »   #ShiaGenocide in Pakistan: Why the Taliban are not destroying NATO trucks any more? – by Mahpara Qalandar 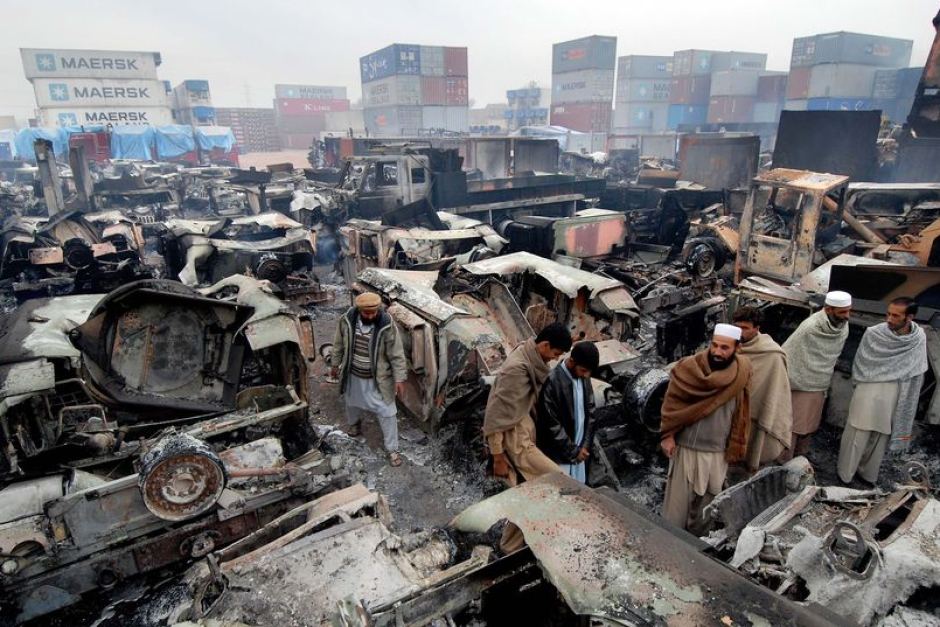 In view of the US withdrawal from Afghanistan in 2014, these days NATO is taking its latest technology and war machines back via Karachi, Pakistan.

But how come the Taliban are not attacking NATO trucks which every day 24 hours a day pass through the territory of Pakistan and end up in Karachi?

If the Taliban (also operating as ASWJ-LeJ Deobandi militants) are the enemy of the United States, this is the best time to attack NATO trucks and destroy American technology

But they are not doing so because it appears that the CIA and ISI have reached an understanding that the attention of the media and the people of Pakistan should be diverted to other issues, at the cost of acceptable collateral damage to the ISI. Thus a lot of Shia blood is spilled and the media and the nation’s attention is directed to it, while the Taliban (of course, funded by Saudi Arabia) quietly allow the peaceful transportation of US war machines via Pakistan.

By doing so, the Americans can kill two birds with one stone

They want people to accept that if the pipeline is called off, the attacks on the Shias will stop but behind this smoke screen is the safe passage to the American technology. This will continue well into 2014 when the NATO soldiers will leave, thus the Shias of Pakistan should be ready for more bloodshed.

In this sordid affair, the Saudi interest is also visible. The House of Saud is extremely angry with Zardari the Shia for having made an agreement with Iran over the pipeline. It has offered to build terminals across from Pakistan so that pipeline become redundant, but since Zardari has not accepted it, the Saudis are also using it an an alibi to kills the Shias and also strike fear in Pakistani politicians that if they go against the wishes of the House of Saud, they will have to face bloodiest consequences.