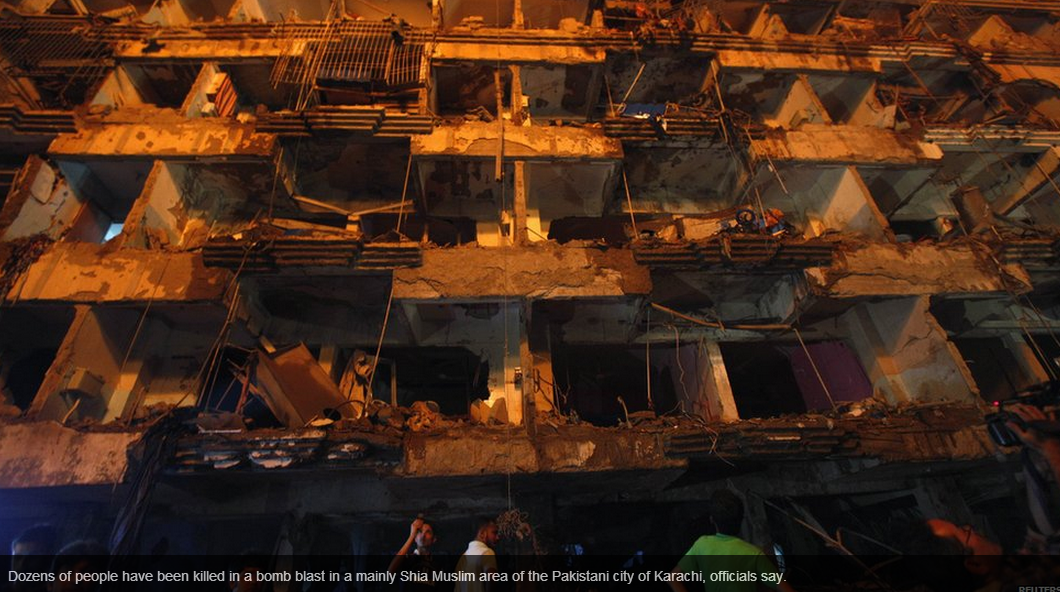 At least 70 people, most of them Shia Muslims but also some Sunni Muslims (about 20) have been killed – including women and children – and around 150 wounded after a bomb attack by Deobandi militants in Pakistan’s largest city.

The powerful blast in Karachi hit close to an area dominated by minority Shia Muslims. “Women and children were among the dead and injured,” Fayaz Lughari, police chief of Sindh province, of which Karachi is the capital, said.

A car containing explosives was detonated at the entrance of Iqra City and demolished two apartment buildings and nearby shops. Bomb Disposal Squad officials determined that a 150kg device was used. Many victims were trapped under the rubble as teams worked to rescue them.

The first blast occurred outside an imambargah (Shia prayer hall) in Abbas Town at about 7 pm as people were leaving after prayers. The second explosion went off within 10 minutes, local residents said.

Rescue officials initially said 48 people were killed in the blasts which caused extensive damage to residential buildings and destroyed several shops in the area.

The toll is expected to increase as some of those injured are critical. “The blasts have caused a crater four feet deep near the main entrance,” Senior Superintendent of Police Mazhar Maswani said.

An emergency was declared at hospitals across Karachi and doctors performed emergency surgeries to save victims.

Several young children were among the seriously injured, officials said.

Police officials said the first blast was caused by explosives hidden in a car that was parked near the entrance of Abbas Town.

Residents of Karachi said the explosion was heard from 10 km away. The bomb contained an estimated 150 kg of explosives and was packed with ball bearings, officials said.

The blasts caused a power outage and triggered panic in Abbas Town, which has a large Shia population.

The first explosion destroyed the facade of two apartment blocks and damaged about 20 shops and several cars.

Fires erupted in the apartment blocks and footage on television showed huge flames leaping into the night sky.

Local residents used car headlights to help rescuers who searched for survivors in the rubble of apartments and shops destroyed by the blasts.

Many people complained that rescue teams and the fire service took an inordinately long time in reaching the site of the blasts.

Heavy machinery reached the spot almost two hours after the attack and residents rushed the injured to hospital in private vehicles and auto-rickshaws.

Abbas Town has been the target of terrorist attacks in the past too. On November 18 2012, three persons were killed and more than 20 injured when a bomb went off outside an imambargah in the area.

At least 1450 Shias were killed by Deobandi militants of banned outfit Ahle Sunnast Wal Jamaat (ASWJ, aka Lashkar-e-Jhangvi LeJ) in 2012 in the deadliest such violence for two decades. Since 1 January 2013, an estimated 300 Shia Muslims have been killed in Quett, Karachi and other parts of the country.

On Monday a bomb blast at a Sufi shrine in southern Shikarpur district, some 250 miles northeast of Karachi, killed three Shias and wounded 10 others as devotees gathered to pay homage to a saint buried there.

Last month the Supreme Court ordered the authorities to come up with a strategy to protect Shias after a wave of bloody attacks in the southwestern city of Quetta in Balochistan province. Two major bombings in the space of five weeks targeting Shia Hazaras in Quetta, capital of the southwestern province of Baluchistan, killed nearly 200 people.
Both attacks, the latest on February 16, the previous on January 10, were claimed by the banned extremist Sunni Deobandi group Lashkar-e-Jhangvi (LeJ aka ASWJ), and have highlighted the government’s and army’s inability to stem anti-Shia violence. Pakistani rescuers gather at the site of the bomb blast in Karachi

Shias, who make up around one in five of the mostly Sunni Muslim population of 180 million, are facing a record numbers of attacks. In the last few decades at least 21,000 Shia Muslims have been killed. https://lubpak.com/archives/132675

Al Jazeera’s Imtiaz Tyab, reporting from Karachi, said: “What I’m seeing is a scene of carnage and destruction in Abbastown, where these two explosions took place in front of two apartment buildings.”

“This is a fairly dense residential area, and between 30 to 40 apartments are reported to be damaged,” our correspondent said. “We also understand is that many people are caught under the rubble.”

“The fact that this is a large Shia neighbourhood is already raising alarms, after attacks on Shia communities in neighbouring Balochistan took place last month leaving over 200 dead.”

Our correspondent described rescue efforts were still underway, with “many local residents using their bare hands to find anybody underneath the rubble who may have survived the blast.”

As of yet no group has claimed responsibility, “but fingers are being pointed at Lashkar-e-Jhangvi, the same group who carried out the bombings in Quetta targeting Shia,” he said. Pakistan’s intelligence agencies helped nurture Sunni Deobandi militant groups like Lashkar-e-Jhangvi (ASWJ-LeJ) in the 1980s and 1990s for cross-border Jihadist operatiosn in India and Afghanistan.

In Pakistani and international media, there is general silence on the identity of the target killed group (i.e., Shia Muslims) and the killers, (i.e., Saudi-funded ISI-sponsored Deobandi militants of ASWJ-LeJ). Often pro-establishment analysts try to hijack or obfuscate Shia genocide as Hazara or Muhajir specific ethnic issue. There is also an attempt to portray Shia genocide by Deobandi militants as Sunni-Shia sectarian violence obfuscating the fact that Deobandi militants have also killed thousands of Sunni Barelvis, moderate Deobandis, Ahmadis and Christians. 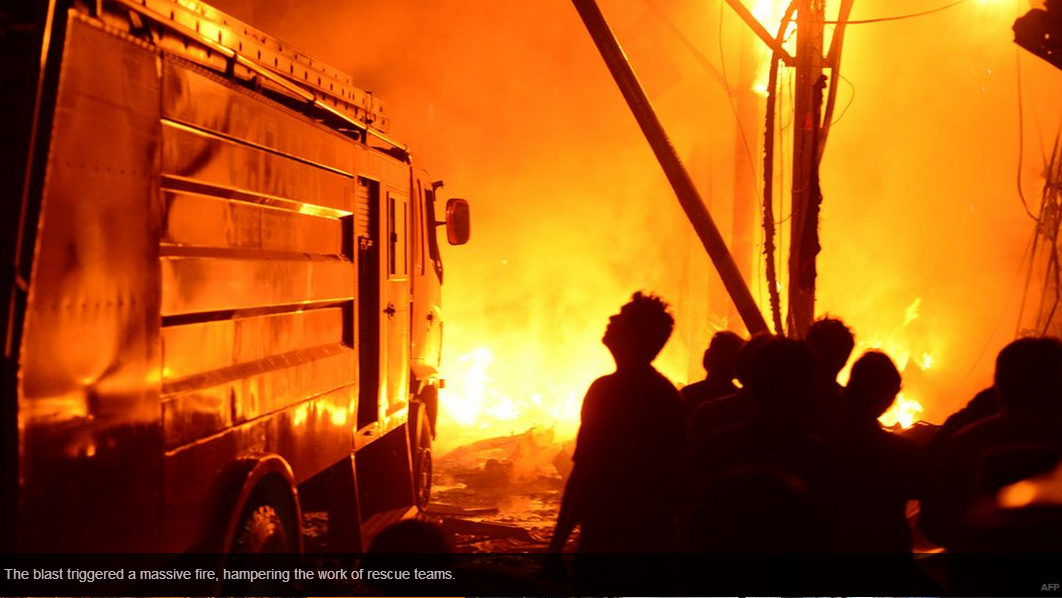 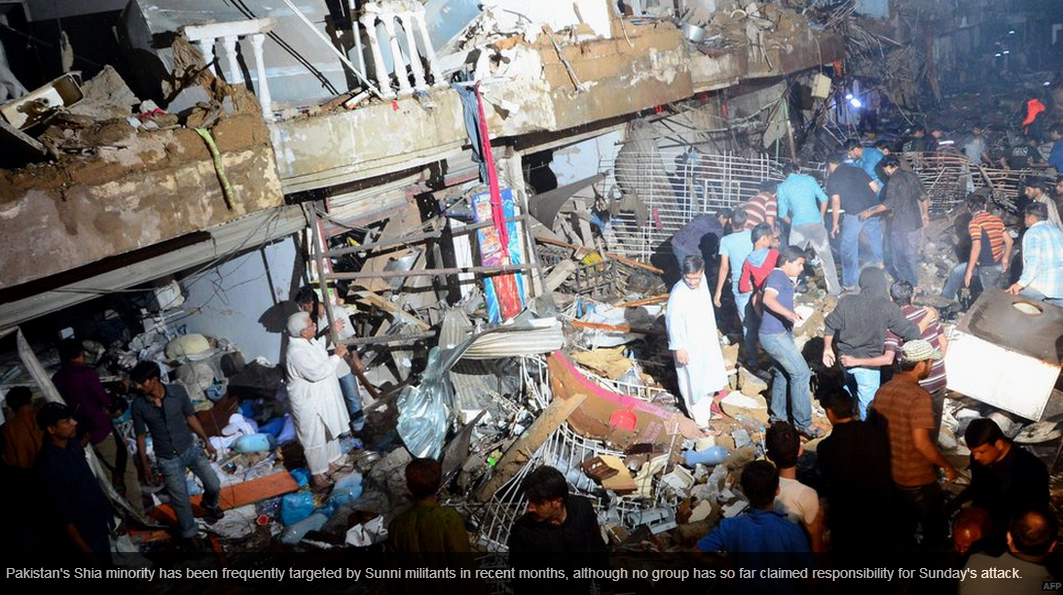 33 responses to “#ShiaGenocide in Pakistan: Deobandi militants of ASWJ massacre at least 50 Shias and 20 Sunnis in Abbas Town Karachi”