Home  »  Featured • Original Articles   »   Pakistan is sliding from terrorism to sheer barbarism! – by A Z 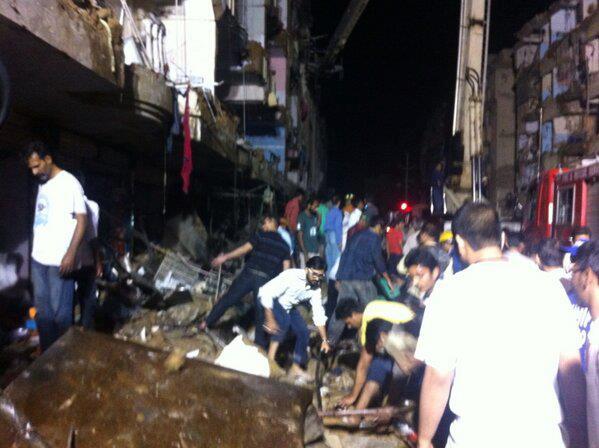 On Sunday twin bomb blasts rocked the Shia neighbourhood of Abbas Town in Karachi. Over forty people died and another hundred were injured, many of them severely. Dozens of the flats and households in this low income area were completely burnt down with tens of families losing not only their loved ones  but also their homes and entire possessions, which formed almost their complete material wherewithal.

Nabi Haider, whose nephew was killed in the blast as the blast destroyed his brother’s apartment and left his brother and nephew writhing in their blood on the kitchen floor, said he feels like Pakistan has abandoned its Shias. Nabi Haider said he was visiting his brother’s house and while he was on the floor after the explosion, he couldn’t see or move. He could barely breathe and hear. A few minutes later, help arrived from the people in the neighbourhood. “I tried to get up, but they pushed me back down,” he said. “I was bleeding. I couldn’t see anything, and it was hard for me to breathe, so I was kind of panicky.” He asked someone what was going on, and he was told that there have been two bomb blasts targeting this Shia locality. “I was soon able to figure out that I was not severely injured – I just felt it was hard for me to breathe, very hard,” he said. About thirty minutes later, paramedics arrived at the scene and took Nabi Haider’s brother and his nephew to the hospital, where his nephew had been pronounced dead while his brother continued to fight for his life, when we talked, several hours after the blast.

Mr Haider admits that before the blast today he was never serious about his faith and hardly ever talked about it. “I was just born into it. I never did anything special. I was just living my life,” Nabi Haider said. “I never really thought about it.” After the bombing, that has all changed, he said. “I ask myself, ‘where do I stand?’ We have to start taking things seriously, because things are getting serious, very serious.”

Nabi Haider was dejected how people who kill Shias are not only not apprehended but are also not held responsible despite their overtly owning up to killing Shias. He does not understand what prevents the State from moving against LeJ and SSP, which are unmistakably ‘criminally responsible’ for the shootings and bombings against Shias. “You are not going to have a change of heart from them; you have to stamp them out” Mr Haider added. Nabi Haider said that he and his family will never be able to move beyond this attack and the trauma and loss it has wreaked on their lives. Scars and emotional damage will be with him for the rest of his life, but Mr Haider sees the bombing as a defining moment in his life in that Pakistan now refuses to identify and let define who he is. He now feels that that his identity, which no one seems ready to acknowledge, is emblazoned on his body in the form of scar tissue and residual metal fragments. He feels no Shia in Pakistan can any longer take his faith in stride.

Faiza Batool, while witnessing her house being gutted down in front of her own eyes and still looking for her son who was down in the street at the time of the blast, lamented that no help from the police or the administration was forthcoming for at least a couple of hours following the blasts. She also deplored the manner in which the country’s media misleads people about the frequent episodes of this absolutely one-sided carnage and the identity of both the victims and the perpetrators of this mindless violence. She said her family had already lost one member in a blast in the locality during last Moharram and now she fears more dead. She said that the victims of Shia Genocide by SSP and LeJ have been abandoned to suffer in isolation. “Even the moderates and liberals are trying to ignore us”, said Faiza.

People like Nabi Haider and Faiza Batool are bracing themselves for the persecution they see happening and coming in increasing proportions. They feel that it is the start of the kind of persecution that the subjects of many other genocides have previously suffered in many parts of the world. “We know from the history and common sense it’s going to get much worse. Persecution of a higher level will come. Not five years, not ten years – much sooner. It’s not far.” Said Nabi Haider.

Akber Ahmed, a Sunni from across the road, was one of the first rescuers to reach the scene of the blast without caring for his life as the dwellings collapsed around him. Akber says at first he was utterly paralysed by the scenes of bodies and blood splattered all over the area. “I felt an overwhelming sense of grief and hopelessness as the injured children and women around me desperately cried for help” said Akber. Akber lamented the fact that nobody seems serious to stop the militants..”Our government and army must halt Pakistan from sliding from terrorism to sheer barbarism. Government must demonstrate it is government of all regardless of one’s faith or ethnicity. A terror attack on one is a terror attack on all our humanity.” Added Akber, as he hastened to return to the site of the blast to join the rescue work that still continued many long hours after the blast.