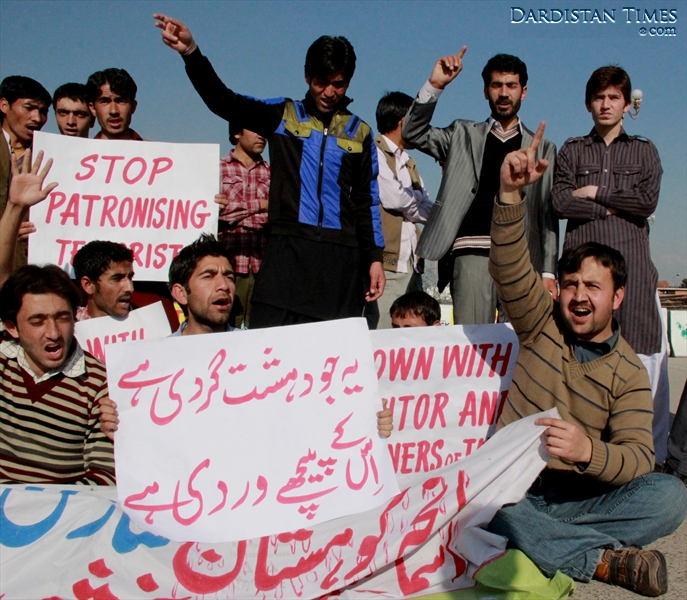 A report of the International Human Rights Observer’s (IHRO’s) Gilgit-Baltistan chapter estimates that around 3,000 people have been killed in Gilgit-Baltistan Province since 1988. On the loss of lives and its impact, IHRO states that about 900 women have been widowed and nearly 2,500 children orphaned. “The loss to property is inestimable.”

Sadly, the IHRO obfuscates the fact that at least 99% of the 3000 innocent people killed in Gilgit Baltistan happen to be Shia Muslims and the majority of the killers belong to Deobandi-Wahhabi fringe, mostly of Pashtun-Punjabi settler backgrounds. It is estimated that at least 2900 Shia Muslims have been killed in GB province since 1988. On 17 May 1988, at least 800 Shia Muslims were killed by Deoband-Wahhabi attackers from Kohistan, Chilas, Darel, Tangir, assisted by military government.

Moreover, under the auspices of Pakistan army, Deobandi-Wahhabi settlers are being shifted to GB in order to convert the local Shia majority into numerical minority in that area.

Instead of being clear and to the point, the IHRO report resorts to an absurd term “sectarian violence” to hide Shia genocide in false neutral and inaccurate terminology.

According to an editorial published on Express Tribune in September 2012:

Gilgit-Baltistan is another  ‘far-flung’ but strategically important region, where the writ of the state has been leeched away since the Afghan war against the Soviet occupation started under the tutelage of General Ziaul Haq. The KKH had been built by the Zulfikar Ali Bhutto government, which India saw as a chessboard move challenging its presence in Kashmir. General Zia, however, soon discovered that the real threat was not from India, but from his new policy of using proxies against the Soviets in Afghanistan. Two developments took place that had enduring effects for the coming decades. The jihad was dominated by the mujahideen funded by America and Saudi Arabia, which meant that General Zia had a stormy relationship with Iran. Shias were targeted by mujahideen “because they were reluctant to help in fighting the jihad against the Soviet occupation”. Shias of Kurram Agency were attacked by mujahideen, followed by the incursion of a Sunni Lashkar into the region in 1988, in order to sort out the majority Shia-Ismaili population of the region. Decades later, the punishment meted out to Shias has reached new depths. This time, it is happening in the shape of the death of the writ of the state in areas such as Kurram Agency, Gilgit-Baltistan and Quetta, whereHazara Shias are being systematically exterminated.

The then-commissioner of Gilgit has been immortalised in history for writing what really happened in 1988. He stated: “It was clear to the Gilgit civil administration that the raiders, who were tribals and mujahideen elements, could not have reached this remote place from Peshawar without someone’s blessing. The FC, whose check posts dot the Swat-Besham road and the Besham-Gilgit highway, did not act to intercept the raiders. The true significance of the Gilgit riot has never been highlighted by our media.” In 2012, the Taliban, fighting another war in Afghanistan under the tutelage of al Qaeda, are using Gilgit-Baltistan as their hinterland, which has to be religiously cleansed.

A professor travelling in the ill-fated bus on August 16 that was gunned down, stated that in the Babusar bus carnage, four Sunnis were killed by terrorists as they came forward to save their Shia brethren. As another proof that the region was never divided along sectarian lines, he added that “terrorists beat up the Sunni passengers for not being supportive in identifying the Shia passengers”.

Gilgit-Baltistan was roughed up again during the Kargil operation when external non-state actors were allowed to penetrate the region — all of them either Deobandi or Ahle Hadith, poisoned against the Shia majority of the region and supported by the military commander there, who was conducting the infiltration into the high mountains against the Indian presence.

The IHRO study adds that despite allocation of massive funds for security, the situation could not be controlled and loss of human lives continued even in the presence of police and law-enforcing agencies. The violence) didn’t even spare the officials of the law enforcement agencies, as an IGP, a judge and two serving DSPs also fell victim to the scourge of sectarianism.

Last year’s attacks on passenger buses on highways in which several people (Shia Muslims) were killed have also been highlighted in the study.

It further states that “certain religious outfits (ASWJ-LeJ) have hoisted their flags on government properties, while hate speeches are also being made openly”. “The law enforcing agencies have become puppets in the hands of sectarian organisations. Instead of removing flags and putting ban on speeches, such organisations are being provided protocols in the name of security,” the report added.

Among other violations of human rights, the watchdog agency said that the quality of education and health facilities in government dispensations are abysmally low. “Not a single well-equipped hospital is there in the whole region inhabited by nearly 1.8 million people.” About the pathetic condition of power supply, the report says that electricity is being provided to consumers for just four out of 24 hours. “The situation has caused inestimable loss to students, patients, small industries and traders.”