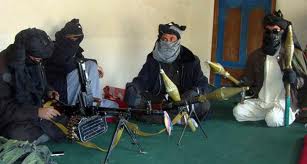 On 3 February 2013, Tehrik-i-Taliban Pakistan (TTP) spokesman Ehsnaullah Ehsan in a video interview appearing with Adnan Rashid, the prime convict in the Pervez Musharraf (Ex-President of Pakistan) attempted suicide attack case, said that if Pakistan-Muslim-League-Nawaz (PML-N) chief Nawaz Sharif (Ex-Prime Minister of Pakistan), chief of the Jamiat Ulema-i-Islam-Fazl (JUI-F) Maulana Fazal-ur-Rehman and Jamaat-i-Islami (JI) Ameer Syed Munawar Hasan acted as guarantors for the peace talks, they would be willing to negotiate in the best interest of the country.

Nawaz Sharif has demanded immediate talks with the Taliban and called on the government to take seriously a conditional peace offer from the insurgents.  At the same time, he has refused the TTP’s request that he act as a guarantor for the talks, saying that given the past record of this government he cannot insure their participation. This is a political tactic of Nawaz Sharif, nothing else. He is trying to prove himself as a man of peace while the same time pointing the PPP government for its violent and double-crossing tendencies. It is true, this government has been reluctant to hold talks with the Taliban, but that is because they already had a bad experience in the past. On May 21, 2008, Taliban and Pakistan government reached a 16-point agreement to bring an end to violence and restore peace to the Swat valley. Within few days of the peace deal, disagreements arose between two parties. The Taliban refused to surrender their arms as written in the agreement, demanding that the government first withdraw troops from the Swat valley. They also demanded the release of Taliban prisoners held by Pakistani government. Within a month, the militants began attacking government officials and also started destroying electronics shops and schools. This caused the government to launch the military operation Rah-e-Haq.

Many Pakistani citizen does not glad about negotiation with the TTP or creating a possible set-up for negotiation. There are too many unanswered questions about the Taliban’s future motility, which have to be answered before start a negotiation process. Those who are asking for negotiations, should have to answer some hard questions. For instance, will TTP accept democracy, which earlier they are used to call Western government system or Anti-Islamic System? In near future, will they allow girls to go to school and universities? Or even, will they let health-workers to give vaccination of polio to the children? Today, there are only three countries in the world where the polio virus remains endemic: Nigeria, Afghanistan and Pakistan. This is a misfortune for a country who claimed himself a nuclear power but can not control polio disease although Pakistan government used his full power to implement campaign against polio.

Those who are asking for negotiations, should be asked whether the TTP’s preceded past agreements signed with the government then why they are advocating such a plan of action. Also, what kind of message is being given to the world and to the ordinary Pakistani, that war which they started against terrorism, where many Pakistani soldiers and civilians lost their lives rewarded with a talks offer. Because by definition, a negotiation involves a certain amount of give and take. What exactly should be given to the Taliban, are they willing to hand over the tribal areas in return for a promise of peace? Apparently the TTP will refuse to disarm before negotiations, as Hakimullah Mehsud said in his last interview, “Asking us to lay down arms is a joke” so there is no way of preventing them from continuing to carry out attacks. The fact of the matter is that those who think that the TTP will lay down their arms and mix in with mainstream society once the Americans leave Afghanistan or if there are talks, are sadly misguided. How someone can easily forget the doctrine of TTP or al Qaeda, they are fighting for their agenda not even inside of Pakistan or in Afghanistan although they are preaching their doctrine in other parts of the Muslim world too. They have only one point agenda which is, to impose their own version of Sharia. This is something that those pushing for talks needs to realize. Either they are naive or they are working on somebody’s agenda.

Although above mentioned scenario is looking really desperate, but we still have a positive hope in the form of Pakistani military which is the ultimate power broker in Pakistan and no talks can be held unless it agrees. In that context, the army chief’s recent remarks that Pakistan’s number one enemy is now internal threats, i.e., militants, doesn’t tie-up well with this push for talks.

The Taliban is a great risk for the sovereignty of Pakistan so they must be removed by power and we should not try to adapt them unless they surrender their weapons to law-enforcement agencies. For a showoff to the international community a short-term deal with Talbian’s may bring few of them back into the mainframe society, yet we will continue to suffer…