In his long apologia for Pakistan army’s inaction against Takfiri Deobandi terrorists of ASWJ-LeJ (formerly known as Sipah-e-Sahaba), Ejaz Haider claims that political parties, PML-N in particular but also PPP, ANP and other parties, are responsible for Shia genocide because they are reluctant to use army to take action against ASWJ-LeJ terrorists.

What about the army and the ISI; how do they look at this phenomenon? (LeJ’s attacks on Shias)
Short answer: they are greatly worried. Next question: what are they doing about it?
Short answer: not much.
Central question: why the hell not? This requires a longer answer and some perspective.
Fact 1: The total strength of the army is about 550,000 troops. Out of this, around 110,000 are deployed in the operational areas in the west. Approximately 60,000 to 70,000 are deployed along the Line of Control as part of 10 Corps and Force Command Northern Areas. The rest are in peacetime locations, to be mobilised to defend the eastern border when required. Additionally, there are a number of other command and staff duties to be performed.
Fact 2: Armies generally operate on the 33.33 per cent principle. At any time, 33.33 per cent are deployed, the same percentage is in training and equal numbers, more or less, are resting and retrofitting. Pakistan’s internal war has thrown this awry. The deployment has gone up to 44 to 45 per cent, training retains the same percentage and the resting and retrofitting has gone down to about 12 percent. The ops areas tenure has upped from 22 months to over two years and a high percentage of units are now awaiting second and third rotation to the ops areas. Evidently a killer.
Fact 3: The Pakistan Military Academy has had to raise the 4th Pak Battalion because the internal war has taken a heavy toll of young officers. The officer-to-soldier kill ratio is very high, upped from 1:16 to 1:14 and now stands at 1:8. This means a shortage of YOs. (Some officers consider it a matter of pride; I consider it a weakness but that’s a separate topic.)
Corollary: the army is stretched thin. It cannot be everywhere and, quite apart from operations to wrest territory, is not meant to address the problem of urban terrorism. Even the counterterrorism sub-units in the Special Services Group, like the Zarar and Karar companies, are meant for fire-fighting, not gathering intelligence and pre-empting.
And the ISI? It has the capacity to gather intel and it does. But equally, there are other organisations like the police, the Intelligence Bureau and the CID units whose primary job is to gather intel. Why are they not effective? Answer: when political governments make alliances with the very terrorists these organisations are supposed to bust, then they cannot be effective. There are other reasons too but this is the primary one.
And when Frontier Corps does get involved, sending terrorists to their afterlife, as in Quetta, the leaders of these organisations invoke the law and register cases against the FC. 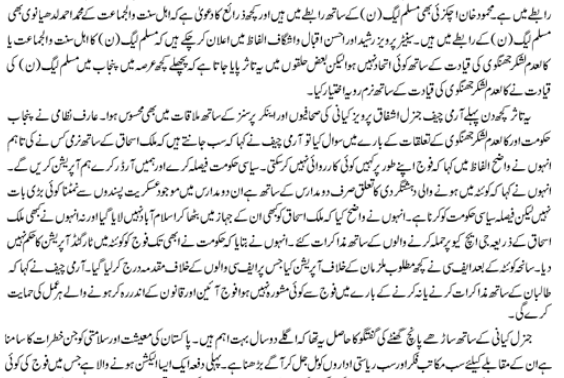 In her article in Express Tribune (28 Feb 2013), Dr. Ayesha Siddiqa offers a counter-view, convincingly arguing that it is Pakistan army, not politicians, who are primarily and ultimately responsible for the current state of Deobandi-Wahhabi violence:

The PML-N government was not always like this. It had contested the SSP/LeJ network during the 1990s, but with little support from the establishment. For instance, when Nawaz Sharif and his brother screamed their heads off about sectarian violence in Pakistan and Punjab, they were contradicted by the Foreign Office. The Sharif government of the 1990s also targeted the LeJ resulting in a botched terrorist attack on the then prime minister, Nawaz Sharif. The LeJ terrorist leader Riaz Basra also threatened them. This was a point when a combined intelligence and police operation could have helped but it didn’t happen. Moreover, the government was dismissed in 1999. There is certainly a possibility that the Sharifs got scared.

The Pakistan and Punjab of the 2000s was different in terms of its relationship with terror groups which were being neatly put to order, rearranged and regrouped. The number in Punjab fell from about 70 odd militant groups (small and large) in the 1990s to a few large ones. However, these were protected and had links with the agencies and continue to do so. The government in Punjab and the police were not authorised to question and challenge most of these groups. Police officers often complain of situations when they arrest terrorists who are later whisked away from police stations by other more powerful intelligence agencies. It was certainly not the PML-N that had allowed organisations like the Jaish-e-Mohammad (JeM) to walk in and out of the Pakistan Air Force, whose officers were later involved in one of the assassination attempts on Pervez Musharraf. Interestingly, the JeM continues to be treated as a good friend and allowed to expand infrastructure. The logic for continued friendship is that the operation was conducted by splinter groups and not the mother organisation.

Moreover, at that point in time even the media was not too keen to hear about jihadis in Punjab. I remember in 2007-08 no one in the larger civil society was ready to hear about the problem in Punjab. In fact, when a New York Times journalist did a story about the problem, a local English daily went out of its way to counter the report and do several stories negating the presence of extremist elements in Punjab. In fact, Mushtaq Sukhera, the senior police officer, who has been dispatched to Quetta to fight LeJ, was then RPO Bahawalpur and vehemently denied a jihadi presence in south Punjab. He even claimed that the JeM madrassa on the main GT Road was ordered to stop any further construction. However, those orders, if there were any, were never carried out.

More than personal inefficiency, this was about the real powers continuing to support the JeM and other Deobandi and Ahle Hadith militant groups.

The decade of the 2000s is also the period when a lot of the militant organisations were allowed to go underground, which meant spreading in society far and wide. They started building their social clout, which the intelligence agencies now believe can be capitalised in mainstreaming these organisations and thus taking them away from violence. It is definitely not any political government’s idea to bring the militants into politics as it goes against the logic of electoral politics. More parties mean more concessions and dividing the vote bank. Until now, supporters of all jihadi networks happily voted for one or the other party without burdening them with any consolidated demands. However, it is now that they are being made to think of forming their own political platform. Sadly, the mainstream political parties are happy to go along and do seat adjustment partly because of their inability to openly challenge Zia’s children. Such cowardice is not forgivable but it is essential to understand the context.

These jihadis will disappear the day their creators run out of uses for them. They were raised initially during the 1980s but integrated in the tactical planning, as indicated in one of the papers produced at GHQ, to play the role of additional division to fight India. Later, they were put to multiple uses. These will get costly with time especially if they are not needed after 2014. In any case, these are risky assets to maintain in a nuclear environment. Going by the splinter-group theory, what if they start an accidental war? Getting rid of them at this stage is not hugely difficult either. In Punjab and Sindh, where these are spreading rapidly, they could be removed through an intense intelligence and police operation. It is mainly the intent and planning that could get things going. 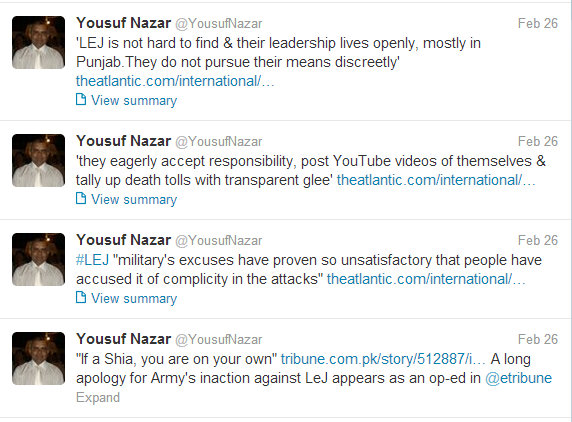 End note: Right-wing Fake Liberal Alliance The similarity of discourse between a seemingly liberal English columnist Ejaz Haider and right-wing Urdu columnist Hamid Mir is not coincidental. This confirms our long held theory that both Islamists in Urdu media and fake liberals in English media remain loyal to the narratives and agendas of the Deep State. Also, there is ample evidence that both groups promote each other. A few weeks ago, some pro-establishment fake liberals (including Akram Lahori’s NGO-liberal niece and director of a pro-establishment think tank) were seen praising and promoting Hamid Mir and a certain Deobandi cleric. A few months ago, a funny columnist tried to convince us that Ejaz Haider, Najam Sethi and Hamid Mir are anti-establishment journalists. This Noora Kushti is deceptive as well as entertaining.