Those who protest by delaying the burial of their dead make me laugh. Why would anyone use the dead to protest against those who are already dead? The whole country has been frozen by a wave of stupidity, selfishness and silence.

Lashkar-e-Janghvi must accept my heart-felt best wishes for successfully killing 84 Hazaras in Quetta within 40 days of January 10th, 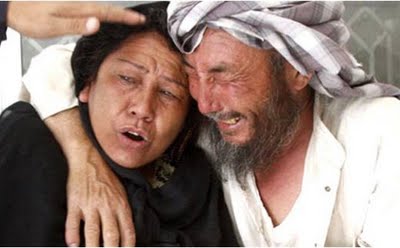 when almost 100 Hazaras were killed. This couldn’t have been achieved without the full cooperation of the Pakistani media, politicians, establishment and the civil society of course. Hopefully, they will also accept my accolades.

The target killing of Dr. Ali Haider, an eye specialist in Lahore, was also a proud moment for the nation. Who asked him to stay back in Pakistan when everyone else had left for the United States? This country is for Arabs like Bin Laden and al-Zawahiri, the Afghans, Uzbeks and western torch-bearers of Islam sitting in FATA. And his son- why was he born in Pakistan and how dare he think he had a future? Every time I hear of a kid’s death, my belief in the glorious future of Pakistan is further strengthened. We don’t need doctors who can cure our blindness. We want them to collide with a truck and explode.

The policy of killing Shia doctors, teachers, politicians and youngsters is also very farsighted. This can make Pakistan more stable and safe. The Lashkar’s definitely has the knowledge, integrity and intelligence to decide who lives in Pakistan and who doesn’t. I suggest that the Lashkar should be included in the March 23rd and August 14th army parade. They should have a chance to display their weaponry and strength there too. Every Pakistani wants to bask in the sunshine of their guns, bombs and rocket-launchers.

Pakistan is not the only country employing sectarianism for prosperity. What is the key factor behind the economic growth of China, Germany, Japan and Brazil? Shia killings. They all started killing Shias and today they are the largest economies on Earth. And indeed, Pakistan’s GDP and human development index indicate that we might soon be among the G20 countries in terms of economic prosperity. Hence, this policy of wiping out the Shias is paying off economically too. Please wipe out more of them like you did in Parachinar, Gilgit Baltistan, Karachi and Lahore.

I recommend that Shahbaz Sharif, Chief Minister Punjab and Interior Minister Rahman Malik for an honorary doctorate in Terror Studies. The exponential growth of sectarian and banned outfits during their tenure requires some recognition at least. However, the absolute crown of peace and stability should go to Pakistan’s COAS- General Ashfaq Kiyani. I know the Difa-e-Pakistan feels battered for not being nominated but they should know by now that the prizes go to the master and not his poodles.

Kiyani deserves the Nobel Peace Prize for answering the decades old question: Are Pakistanis human? His studies have proven that after all, Pakistanis are not humans. We are strategic assets and targets, mere pawns in the grand game of regional control and supremacy. When affectively used, the assets can bring down buildings and governments, create chaos and become catalysts for diplomatic bargains. The thought that we are not humans is flattering and humbling at the same time. It strips away the burden of consciousness- that ugly duty of speaking up against injustice. However, we are also too cunning and deadly to be an animal. Whatever is a Pakistani, this excruciating silence makes me think if he isn’t alive.

Those who protest by delaying the burial of their dead make me laugh. Why would anyone use the dead to protest against those who are already dead? The whole country has been frozen by a wave of stupidity, selfishness and silence. Just look at yourself in the mirror. If you were a Hazara or a Shia- you could be dead by now.

But let’s just sit in our drawing rooms, enjoy Facebook and coffee. Plus the Youtube videos of Shias being beheaded provide such good home entertainment now, thanks to the Lashkar again. We are forever indebted to the Lashkar-e-Jhangvi for thrusting Pakistan on this path of peace and prosperity.