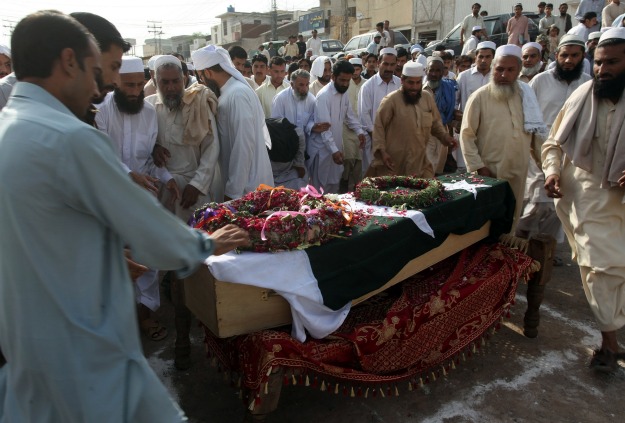 I had a pretty normal childhood like many Pakistani children. I was born in a generation which was regularly taught that all ailing problems of Pakistan are due to corrupt politicians and whenever Army will again come into power, things would just magically start to place themselves in rightful places.

Yes, I am of the generation which grew up fascinating about khaki uniforms and watching Sunehrey Din and ‘Alpha Brave Charlie’. Then of course came the time when army DID take over the country and I saw people smiling and distributing sweets.

So did things start to magically place themselves back where they belonged after that? Well, not exactly. In fact, shortly occurred an event which for the first time in my life made me feel unpatriotic; At least from the point of view of state narrative. Just after couple of months of military coup, an Indian plane was hijacked by terrorists demanding the release of Maulana Masood Azhar. Throughout that time, PTV kept on pumping the state narrative into its audience that Pakistan or any of its state or non state actors have nothing to do with it and Indians are just feeling the backlash of their approach towards Kashmir, by the Kashmiri themselves. I bought that argument. So you would imagine my surprise when after few weeks of Azhar’s release, I found out in our newspapers, that not only did Maulana came to Karachi after the release but was announcing his own organization Jaish-e-Muhammad.

The goals of organization apparently were to free Kashmir giving an end to Indian tyranny. His exact words to be precise were: “I have come here because this is my duty to tell you that Muslims should not rest in peace until we have destroyed America and India”. Ok, so maybe it was just more than about Kashmir.

Organizations flourished in Southern Punjab, while Maulana Masood Azhar himself started giving fiery sermons in Bahawalpur seminary which not just included the evils of India, America and the Jewish lobbies, but his interesting takes on other sects as well i.e Brelvi sunni and shi’as in particular. Southern Punjab of course is the same area which had been the hub of other sectarian outfits for many years, Lashkar e Jhangvi among them, with Sipah e Sahaba giving them a political cover. One thing to understand regarding all these different outfits is that they are brainwashed with same type of hate literature against non Muslims and all other sects which do not agree with their ideology. Also members of such groups have a history of transfer of people from one lashkar to another.

When Musharraf initiated a half hearted crackdown against different jihadist groups, after US pressure due to attack on Indian parliament many of such groups eventually formed into Punjabi Taliban in alliance with members of TTP and Al Qaeda of Afghanistan. One should also remember that during Taliban massacre of Mazar Sharif, there also emerged reports of members of Sipah e Sahaba participating alongside Taliban against Afghan Hazaara Shia population and Iranian consulate also came under attack resulting death of journalist and 8 diplomat members. So these groups at micro level shared the same ideology for a long time. In form of Punjabi Taliban, TTP found the most destructive ally and for years ahead groups like Lashkar e Jhangvi, Harkatul-Jehad-AlIslami and Jaish e Muhammad being involved in most of the attacks. The attacks escalated most when TTP ended peace deal after the Laal Masjid operation (which for instance also held many Jaish members) and military are police forces were targeted directly. Most prominent being GHQ attack in late 2009 and Manawan Police Academy attack in early part of the same year.

This is probably the period where our military strategists again started to gather some of the ‘perceived good Punjabi Taliban’ under their protective fold for reasons best known to themselves. But a fair guess can be made that they hoped these ‘good ones’ might be able to pacify the ‘bad ones’. The timelines of events before and after these attacks match the theory. In 2008, Baluchistan’s LeJ chapter’s head Usman Ali Kurd managed to escape high security zone of ‘Quetta Cantonment’ (http://www.thenews.com.pk/Todays-News-13-20265-Usman-Kurd-the-man-who-caused-fall-of-Raisani-govt). During the GHQ attack, founder of Lashkar e Jhangvi Malik Ishaq came to persuade the main attack Dr Usman, another LeJ member, after he was flown out of jail specifically for this purpose (http://www.thenews.com.pk/Todays-News-2-57832-Lashkar%E2%80%99s-Ishaq-had-clout-even-in-jail). Dr Usman reportedly after seeing him and Ahmad Ludhianvi (Chief SSP), said “I’d have wished to die instead seeing you here from GHQ side”. Which indicates that he felt betrayed and surprised to see his leaders who perhaps at some point had used him and many others like him.  One and a half year later, Malik Ishaq was released at SC orders due to ‘lack of evidence’.

Incidentally, the lone suspect who was captured from Manawan police attack site with grenades and ammunitions and on whose tip, 10 other suspects from a ‘proscribed religious organization’ (http://dawn.com/2009/04/03/manawan-suspects-held-in-sukkur/) were also arrested, was also set free in June 2010. Manwan is not far from Cantonment as well and there is SSP seminary in Manwan also. During last couple of years, SSP has tried to show its street power in populated areas near Manawan like Bedian road, Bhatta chowk going till RA bazaar and Nishaat Colony by hate filled wall chalking and violent protests against blasphemous youtube video. All these areas are either near cantonment or part of it. In the wake of recent face saving attempts by PMLN this wall chalking has finally been removed which indicates earlier lack of motivation to do so. Malik Ishaq earlier this year had planned to give sermon in mosque of KB colony, near airport and Cantonment area but was arrested on hate speech in order to prevent him from speech in such a prominent place. However, he was released shortly afterwards.

Since the release of Ishaq, attacks on shi’as have intensified, especially in case of Baluchistan which saw many incidents on pilgrims going to Iran, local shi’a Hazaara and non Hazaara population. As indicated in Amir Mir’s report in The News (http://www.thenews.com.pk/Todays-News-13-20265-Usman-Kurd-the-man-who-caused-fall-of-Raisani-govt) Malik Ishaq established contacts with Usman Kurd and his no. 2 in Baluchistan. That also explains why the material for the latest blast in Hazaara Town was taken from Punjab. However it does not explain why any of our security agencies failed to apprehend it on its long way towards Quetta.

Wajahat S Khan while deconstructing many theories about Quetta problems in his peace (http://www.thenews.com.pk/Todays-News-9-160664-Narratives-on-Hazara-pogroms) mention the private confessions of cops that the “chaps in the Cantt” may be thinking the LeJ is a lot of things but not anti-state; thus there may be a “strategic umbrella tolerance” for the group.

What exactly is anti state? Perhaps ‘our chaps in the Cantt’ think anti state only means those who want to capture barren lands and mountains. One would rather think, groups engaged in killing and annihilating fertile families would also be anti state to some extent at least? Is the purpose of armed forces not to protect its country’s civilian population? According to some people, army wanted to engage with Malik Ishaq to deradicalize him and other terrorist.

Does this ‘deradicalization mission’ mean that he is going to prevent his likes from becoming another Dr Usman of GHQ attack and instead divert their focus and energy to become another Riaz Basraa?

Thankfully there are voices now being raised in the media. Anchors like Waseem Badaami, Mubashir Luqman and Muhammad Malick and politicians like Sheikh Waqas are openly discussing the Arab world connections with these militant groups and failure of our security forces to control them. As per Najam Sethi, military is reluctant to initiate any activity against terrorists because they do not have political support. This argument is good but not good enough. While it is true that parties like PMLN are giving political cover for these terrorists and some financiers of PPP are providing licensed weapons to these groups (as mentioned by Hamid Mir in his column), it does not exempt our military leadership and should not be used as an excuse. After all, when have they ever needed political support for kidnapping and killing Baluch nationalists? Don’t they do it when feel like it anyway?

The sudden change of heart of analysts like Malick is encouraging however and may be an indication that establishment may finally be starting to ditch its old pals and creating a healthy atmosphere in media to start an eventual operation. But this could also mean that Malick has just been divorced so I should not keep my hopes up too much.

Of course there are other international factors as well due to which our forces may find themselves handicapped. One primary factor is of course that a dog can’t bite the hand that has been feeding him for many years and this is the case where our top brass may not wish to disturb their Arab masters who neither want Pakistan to have Iran gas pipeline deal or for Gwadar to flourish as a port. It is high time our politicians and the security forces start to value lives of Pakistanis rather than worry about wrath of Arab masters.