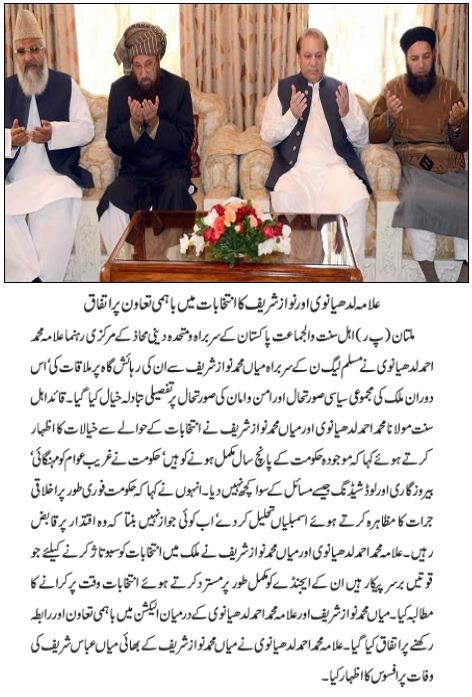 Note: The following is an adapted version, with minor changes, of Mr. Feisal Naqvi’s article on the unholy alliance between Takfiri Deobadni militants of ASWJ-LeJ and PML-N. The minor changes reflect the fact that it is not only Shias but also thousands of Sunni Barelvis, moderate Deobandis & Salafis, Ahmadis, Christian etc who have been slaughtered by Takfiri Deobandi militants of the ASWJ-LeJ network.

Amir Mir is one of Pakistan’s most respected journalists and an authority on militancy and terrorism. He has written a number of books on the subject including the well-regarded “Talibanisation of Pakistan: From 9/11 to 26/11.” In 2006, he won the APNS award for the best investigative journalist.

Mr Mir’s credentials are worth noting because this past Friday, he authored a front-page article for The News which stated in blunt terms that: 1) the Federal Government wanted the Punjab Government to “launch a massive crackdown on the Lashkar-e-Jhangvi (LJ) and the defunct Sipah-e-Sahaba Pakistan (SSP)”; 2) “Chief Minister Shahbaz Sharif is unlikely to oblige” the Federal Government by launching such an operation; and 3) the “main reason” why the Punjab Government is refusing to take action against the Lashkar-e-Jhangvi is because it has “a seat-to-seat adjustment deal between the PML-N and Ahle Sunnat Wal Jamaat (ASWJ) for the upcoming elections”.

In case the alphabet soup of parties has left you confused, let me explain.

The SSP is an organisation established in the early 1980s by Maulana Haq Nawaz Jhangvi whose avowed intent was to turn Pakistan into a Sunni state. The SSP was banned in 2002 as a terrorist organisation under the Anti-Terrorism Act, 1997. According to Mr Mir and others, the ASWJ is merely a rebranded version of the SSP. In any event, the ASWJ is a new name of a banned organisation.

Let me therefore repeat Mr Mir’s central contention in simpler words: the Government of Punjab is unwilling to act against the self-proclaimed killers of Shias because the PML-N has an electoral alliance with a banned organisation believed to support the killing of Shias.

Is Mr Mir’s assertion correct? Frankly, I don’t know. The PML-N has denied Mr Mir’s report as it had denied an earlier report to the same effect in The Express Tribune. Unlike theTribune, Mr Mir has issued a response to the PML-N’s denial in which he has reasserted his contention. He has noted that he had filed his report after getting the PML-N’s version from a member of that party’s central executive committee, that the PML-N and the ASWJ had jointly contested a by-election on a Punjab Assembly seat for Jhang in March 2010, and that Punjab Law Minister Rana Sanaullah had openly campaigned for a PML-N candidate in 2010 along with Maulana Ludhianvi (a leader of first the SSP and now the ASWJ). Mr Mir has also noted that the Government of Punjab has admitted paying a monthly stipend to the family of Malik Ishaq — the vice-president of the ASWJ, allegedly a founder of the LeJ, and an accused in at least 43 different cases for the murder of over 70 people. As noted by The Express Tribune and other newspapers, witnesses who appear against Mr Ishaq tend to die suddenly.

What does all of this mean? I do not know for sure. But I am certainly not reassured by what the PML-N hierarchy is saying.

Take, for example, this recent statement by Ahsan Iqbal:

“We strongly condemn terrorist acts against Ahle Tashee …. These incidents have been happening for a while now. Who is behind these acts of terrorism? Why are these elements still at large?”

Seriously? The PML-N is the second largest political party in the country and, as the ruler of Punjab, directly responsible for governing half the population of Pakistan. The Shia population of Pakistan has been getting slaughtered at an increasingly rapid rate. How is it that the Deputy Secretary General of the PML-N can have no idea and no opinion as to the entity responsible for those killings, especially when the Lashkar-e-Jhangvi has repeatedly, proudly and openly claimed responsibility?

Not convinced? Take a look at the statement of condemnation issued by Mian Nawaz Sharif after more than 80 people were massacred in Quetta. That statement is too long to reproduce here but is notable only for the blandness of its language and its refusal to blame any specific group (excluding, of course, the Federal Government).

Khurram Dastgir Khan of Gujranwala, my good and extraordinarily learned friend, represents the PML-N on Twitter. I specifically asked him to comment on Amir Mir’s report but got no reply. Instead, Mr Dastgir has linked to reports of Mian Shahbaz Sharif ordering action against LeJ after prefacing them with the slogan “action, not words”. If Mian Shahbaz Sharif is finally taking action against LeJ, that is a good thing. But it needs to be understood that words too are important.

Ground reality is much different. Rana Sanaullah is known for publicly participating in political rallies organized by ASWJ-LeJ along with Amhed Ludhianvi Deobandi. On TV channels, it is not uncommon to see Rana Sanaullah arguing in support and defence of the ASWJ and its chief Ahmed Ludhianvi.

I have criticised Imran Khan in the past for his desire to enter into negotiations with the Taliban and I stand by that criticism today. At the same time, Imran Khan deserves tremendous credit for being the only major opposition figure to openly denounce the Lashkar-e-Jhangvi. I have yet to see any similar open and public condemnation of the Lashkar-e-Jhangvi by the PML-N. And its absence is being increasingly noted by Pakistan’s Shias.

Let me state some simple figures. Shias make up anywhere from 15-25 per cent of Pakistan’s population which in turn means about 30 to 50 million people. Even the lower end of that range represents a very large number of people.

I mention these figures because the PML-N needs to understand that: 1) the Shias are watching; and, 2) irrespective of how many Shias get killed, the remainder will still outnumber those tempted to vote for the PML-N by its pussy-footing around with the likes of Maulana Ludhianvi.

I’m sure the Sharif brothers already know that killing Shias is immoral. But they may also wish to consider that buying votes with Shia blood is bad politics.

Video: Confession of an LeJ-ASWJ terrorist