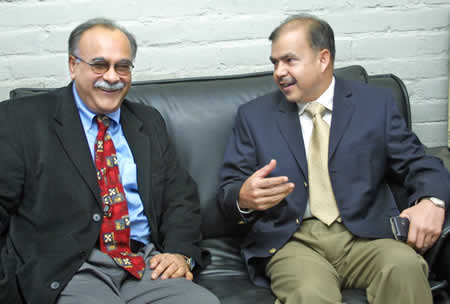 In his Urdu article in daily Jang (24 Feb 2013), Najam Sethi once again resorts to the 80-20 formula (mixing 20% of misstatements and misrepresentations in 80% of facts) to obfuscate and misrepresent Shia genocide.

1. Sethi misguides his readers that LeJ and TTP are two different groups. He hides that LeJ, TTP (also ASWJ, JeM etc) are Takfiri Deobandi groups with overlapping membership and shared ideology and objectives. All of these groups are united on the Takfeer (apostatizing) of and violence against Shias.

3. Sethi blames civil administration for lack of action against LeJ. In particular he identifies lack of political consensus, effective police force, effective anti-terrorism laws and cooperation between civil and military institutions as responsible for Shia genocide in Pakistan. Of course this is tantamount to underplaying or ignoring the most important factor, i.e., Pakistan army’s reliance on Jihadist-sectarian Deobandi groups as strategic assets for cross-border activities in Afghanistan and Kashmir. In other words, Sethi does not take into account that civilian administrative measures are bound to be ineffective when the most powerful institution has a lack of will to take action against its own strategic assets.

4. On the contrary, Sethi claims that army wants to take action against LeJ-ASWJ terrorists, however, it needs effective political and governmental support for that action which is currently lacking. In other words, Sethi holds PPP, ANP, MQM, PML-Q, PML-N etc responsible for lack of army action against LeJ. Can Sethi explain why army does not need any such political support when it has to kill innocent Balochs in Balochistan or Pashtuns in Swat and FATA?