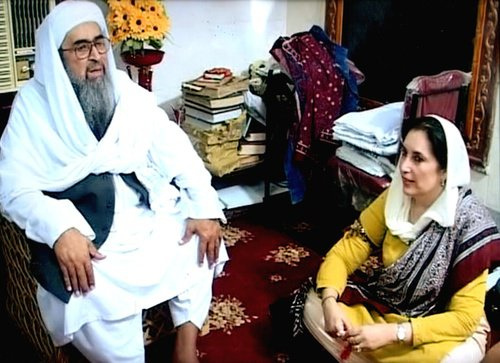 We need to understand that the same people orchestrating Shia Genocide also kill Sunnis in their spare time. Once they have taken care of Shias they can switch to doing it on a full time basis. They embody Takfiri Hate, which has no mercy, let alone tolerance, for diversity.

In the latest incident in Sind, a highly respected Sunni Sufi (Barelvi cleric) Saeen Hussain Shah Qambar Wal loses his son in a raid on his life in what can be termed as yet another demonstration of Takfiri Hate, which manifests itself in various forms.

According to daily The News:

JACOBABAD: A blast took place during a rally being attended by Sain Hussain Shah the Pir of Qambar Sharif here on Wednesday.

Sain Hussain Shah was among the ten injured while his grandson was killed in the remote controlled blast following which the security situation deteriorated in several cities of Sindh.

Following the blast markets were shut down in Jacobabad while the Sunni Tehreek has announced a day of mourning in Sindh. http://www.thenews.com.pk/article-88890-Sain-Hussain-Shahs-grandson-killed-in-Jacobabad-blast

From apostatizing to suicide bombing to the systematic murder of Shia and Sunni Barelvi Muslims, Takfiri Deobani haters spares no one in its quest for dominance. They also attack moderate Deobandi and Salafi clerics. It is the crime against humanity, the bombing of Sufi shrines, the architect of Shia genocide, and the perpetrator of violence past, present, and future against the Sunni Clerics and all others who dare to differ from it. During the past decade, Takfiri Deobandi Hate has demonstrated to the world what it is capable of in an unimaginable magnitude. It shows us the sick and twisted mentality of a people that it brainwashed and the atrocities that transpired from the ideology of its conquered minds. Atrocities ranging from systematic killing of women and children to ruthless beheading of the security forces.

At the same time it has also exposed the consequences of apologist leaders and thinkers who could have helped the victims of hate. They fail to understand that fundamentalism and terrorism are both tools of Takfiri Hate. One is used to exercise violence whereas the other is used to influence gullible minds and to infiltrate intelligentsia, media, and state institutions. It appeals through negating the cultural aspects and heritage. The literal understandings of Islamic norms are employed to dismantle the cultural elements. The final objective of all their strategy and activities remains common in the seizure of power and imposing their world vision on all. Make no mistake; Takfiri Hate is by no means an adversary of neo-colonialism or imperialism. In fact in the decades leading to the nineties, it was nurtured by the West to great strengths. For a very long period apostatizing Islam was a perfect servant of the West. The West resorting to seeing the Islam as an enemy of the Western modernity and representing a clash of cultures (Samuel Huntington et all) are only modern innovations. Prior to 9/11, the only Islamist organizations condemned by the West, like Hizbollah and Hamas, were those that did not serve its political interest and not because they posed an ideological threat. In short apostatizing Islam is indeed a philosophy of exclusivism, fanaticism, intolerance, violence, and dogmatism, which is unable to cope with the demands of the present and is unwilling to live with the realities of a multicultural world. This philosophy of violence, conflicts, and terror has to be dealt with sternly and rooted out. This is a war that the humanity cannot afford to lose, and least of all Pakistan.

That it is allowed to take place betrays the apathy that pervades Pakistani society. After every attack like the last one in Quetta, people say never again. Never again will we ignore the warnings and let such hate and evil destroy the lives of our fellow citizens. But this promise has been broken numerous times, often before the dead are even buried. Not only must we stand up together to stop this, the history and lessons of the Takfiri Hate must be passed onto future generations and taken seriously to understand the havoc such rage, if allowed to prosper, can wreak. We must recognize the capacity of Takfiri Hate because it has no boundaries. It has traveled across oceans and continents, squeezed the trigger of Taliban soldiers in Mazar e Sharif, killed thousands in Africa, maimed men and women alike in Iraq and Syria, lynched and bombed innocents in Pakistan, poisoned the waters of River Kabul with blood, climbed the far-off mountain sides of Gilgit and Hunza and currently stretches across from Indonesia to the vast desserts of Somalia and moves the mouths of those who preach against the acceptance of minorities, apostasy of Shias, infidelity of non-Muslims, and culpability of the Sunnis who do not subscribe to its gospel of odium.

Are any bystanders listening?