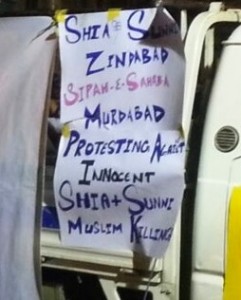 Yesterday I spent 12 hours at the Dharna at Teen Talwar, Clifton, against the Shia genocide. At the time of writing, the Dharna is still underway and it has been over 24 hours since its start now.
When I joined the Dharna at Bilawal House last month, I had arrived 10 hours after the proceedings had started. The place was already packed with thousands of Shia protesters and being a Sunni I was intimidated. The repeated chants of “Labaik Ya Hussian” and “Ya Ali” were deafening and frightening. I was confused whether I should join in as I actually pondered if these chants were blasphemous.
I felt alienated listening to various references to the Imams who aren’t discussed in our mainstream curriculum.  Speaker after speaker made references to how the Shia population was a target, how they were the oppressed, how they were the victims. I felt frustrated thinking that the Quetta bombing was first and foremost a human tragedy, a national tragedy so why wasn’t it being treated as one.
I looked around and found the answer. If the protest was not a national protest, then why should I expect the victims to be identified as Pakistanis. If the organizers were Shia and the vast majority of protesters were Shia then why shouldn’t they have the right to highlight their victimization at a sectarian level.
Belonging to the majority sect of Pakistan, it was embarrassing to find myself in the minority in this protest.
At that time I realized that I was not intimidated because the Shias were hostile or unfriendly upon learning about my sect. In fact every Shia who learnt about my identity, came forward, shook my hand and thanked me for coming. The fear crept from inside from my deep rooted bias which is instilled in most Sunni children as how Shias secretly hate Sunnis. Sadly, the opposite appeared to be true. 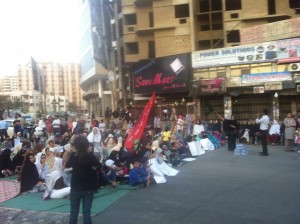 Hence, this time I had made a point to be there from the very start and encouraged all my Sunni friends to do the same. When I arrived along with my friends, there were just three people standing on Teen Talwar looking in all directions trying to spot co-protesters. We walked up and joined it. People drove by paying no attention. 10 more people joined in, but the bystanders appeared unbothered. Suddenly, I heard someone scream at the top of their voice “Naray-e-Haideri!”. The cars slowed down, the traffic Police took notice. I turned around to find that the voice was not of a Shia protestor, but of my friend, Nadir, a Sunni. I couldn’t hold back the smile on my face. What started with 3, reached the strength of close to 3000 in a few hours. 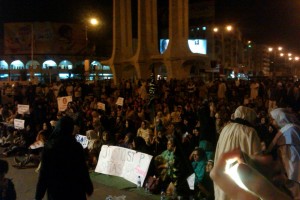 This lot of protestors appeared more mature and well aware than that at Bilawal House. This time slogans were not chanted against America but against Taliban. Western Powers were not blamed for sectarian violence, but Lashkar-e-Jhangvi and Sipah-e-Sahaba were bluntly blamed. This Dharna was not in denial. They were willing to accept that terrorism is a home grown problem. 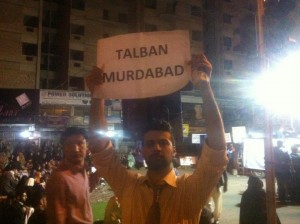 Protesters stopped chanting “tum kitnay shia maro gey?” and asked “tum kitnay insaan maro gey?”
The goods things from the Bilawal House Dharna were also carried forward here and one had to be there to note those finer details. Teenage boys who were risking their life by volunteering as security guards (unarmed), then there were volunteers who had made a makeshift kitchen and were serving tea, then there were those who were distributing juices, biscuits and biryanis, then there volunteers as young as 5 and as old as 70 carrying out trash bags collecting used paper cups and wrappers. No public or private property was allowed to be damaged. In all of those volunteers there were lessons to be learnt; the lesson of selflessness, the lesson of civic responsibility, the lesson of unconditional patriotism and the lesson of community.
Unfortunately, one sad fact also remained common between both Dharnas. Sunnis were again a minority. And now I want to ask the Sunni readers why? Why is Hazara killings not our concern? Why is Shia genocide not our concern? If it is then where were the Sunni Protesters? Why did we let this Dharna be reduced to a Shia protest too? Does only the death of a Sunni boy or girl has the exclusive privilege of being reported as a Pakistani death?
For those Sunni readers who really aren’t bothered about a Shia death, they should know that not all Hazaras who died in the bomb blasts were Shia.
Every single time such a tragedy takes place the ignorance of the Sunnis results in only more ridicule for Pakistan at the international level as we expose to the world how polarized and inhumane we are that we cannot even condemn terrorism and loss of innocent lives as one united nation. But at home, the damage is worse. We make our Shia countrymen realize that they are alone. We tell them that we will celebrate 14th August together, that we will dance on the streets upon our cricketing victories together, that in the good times we will be there, but that’s where the brotherhood stops. In the time of mourning and against threat you are alone. At most, we will extend our sympathies on social networking websites.
Attending the protest as a Sunni did not make me a better Pakistani, but what did sitting at home and just updating your facebook status against the genocide made you? 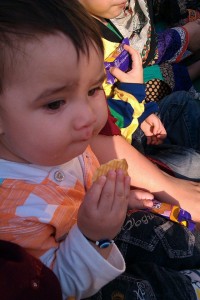 There were thousands of Pakistani students who took part in the “Occupy University” Campaign in England in 2008 in protest against Israeli occupation of Gaza. Sadly, most of them choose to sit at home now because apparently Palestinians are more Pakistani than Shias.
Step up and step out. Be a part of something. Make the protest Pakistani. Make this tragedy Pakistani. Make the demands Pakistani. Make yourself Pakistani. 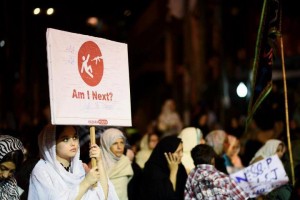