Pakistan is probably the only country I have seen where hate and intolerance can be and are openly professed in public. By condoning hate language in media, school texts and places of worship; we have created an environment where nothing sells like extremism. Mullahism now largely means livelihood and economic considerations prevail in preaching what sells the best. There is an abundance of fanatically theocratic cults which glorify death and killing, expropriating metaphors from the Quran and Islamic history.  Any sensible cries get lost in the cacophony of extremism in Pakistan. Instead the apologists come out in droves against you. It is these apologists who are forcing the nation’s will, making us lose focus. Some even raised stink when Osama Bin Laden was killed. You cannot be selective in your activism. Speak for everyone. What about the closure to Ahmedi victims’ families? Most of the renowned liberal or investigative journalists are waging a war on reason and hope, for their own advantage. Ever since Z A Bhutto’s government bowing -for its own gain- to the extremists, resorted to every crass argument in the book to carry out the murder of reason and sanity in Pakistan by declaring Ahmedis non-Muslims, Pakistan has been sliding down the path of extremism.

What is good though is that there are still a large number of people who are resistant to such incitement and are unwilling to participate in hate-mongering. However, as we have witnessed over the past 35 years, with every successive generation this resistance is likely to wear off. Pew Research Centre’s widely acknowledged report “The World’s Muslims: Unity and Diversity” published in August 2012 already shows Pakistan among the least tolerant of all the Muslim countries covered in the report. 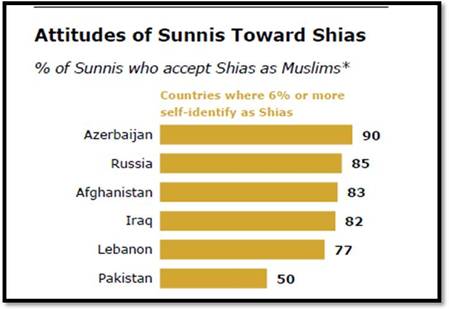 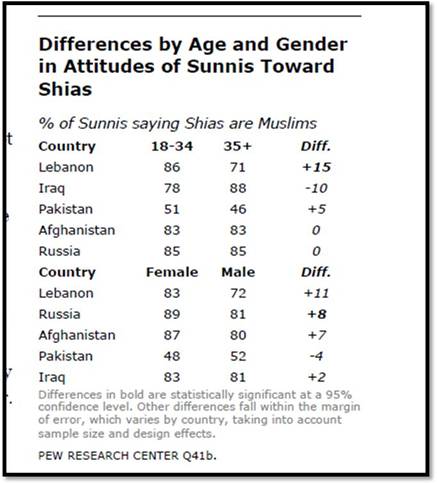 The fact that Pakistan is the only country in the world where less women (48%), as compared to men (52%), consider Shias as Muslims clearly evinces the effects of hate language and incitement, as women are less likely to be in contact with people from minority sects and thus more likely to base their view on the language and propaganda they are fed with rather than on their own experience.  From this we can also understand how susceptible an illiterate population could be to hate propaganda, especially when their daily experience affords them little opportunity to dispel the notions of incitement they are being subjected to.

So Pakistan’s main problem today is extremism. The major strifes  in the country are incited not by any tangible conflict of interests but by words. Mullahs and many other leaders use language to the deadliest effects and an average Pakistani is as susceptible to being galvanized by slogans as he is to contagious ills. It is an epidemic, in which the group mind prevails. Hate language is the most effective tool to run campaigns of dehumanization and de-legitimization, which themselves follow classification and symbolization, producing willing killers and complicit bystanders. While guns and suicide jackets may be the hardware, the words undoubtedly are the software of terror and sectarian internecine.

The prevention of sectarian mayhem in Pakistan depends more on the transformation of bystander majority’s indifference into a willingness to recognize the problem and to do something about it. There are now existential dangers to the country associated with ignoring religiously sanctioned dehumanizing hate metaphors, from any one, which are intended to prepare common followers to normative inhibitions to torture and killing. I think that the spread of such dehumanizing hate language drives a new country-wide axis of genocide, which is now recycling the extremism of certain Islamist groups into extermination of Shias Ahmedis. We need to understand the differences in impact and importance between public and private drawing room incitement. Public hate language can be used highly effectively to mobilize and motivate perpetrators and silence, intimidate and desensitize bystanders. Burke’s famous quote reminds us that “For evil to flourish, all that is necessary is for good men to do nothing”

Let’s define hate language and incitement, trace its use in promoting violence and its pseudo-religious origins. Hate language refers to terms which are used to stigmatize, demonize or dehumanize groups defined by their national, ethnic, religious, racial, sectarian, or political identity. In our context Dehumanization in particular refers to hate language which includes metaphors usually from Islamic jurisprudence and history to declare a sect as apostate. In Muslim mentality nothing induces greater disgust, revulsion and hate for the other than the Apostatization of a Muslim or an act of Blasphemy from a non-Muslim. We also need to be clear that in a low-tech environment such as Pakistan, use of Public places to spread the messages of hate is very important. While gas chambers were used to kill people at Auschwitz, as Abraham Joshua Heschel pointed out, “Auschwitz was built not with stones, but words.”

Just as the Young Turk regime in 1915 called the genocide of Armenians the eradication of ‘dangerous microbes’ and Lenin described the bourgeoisie as parasites; groups like Al Qaeda, LeJ, TTP and SSP now emphatically apostatize Shias as the most ‘killable’ human breed. Such dehumanizing terms go hand-in-hand with pseudo-Islamic terms for measures to get power over the masses.

As we examine hate language and its pseudo-religious origins in the present day world, we note that in the 20th century, endemic bigotry, xenophobic nationalism and racist biology created an ambience conducive to the spread of dehumanizing metaphors of hate language to stigmatize victim groups. The situation was further exacerbated after the rise of Muslim extremism following the upheavals in Afghanistan and Iran and the on-going rivalry between Iran and Saudi Arabia. While the rest of the world has normally used medical terms (microbes, parasites etc.), Muslim passion thrives more on the use of religious terms (apostate, infidel, mushrik etc.) to the same effect. This environment has both fed and is being fed by extremely parochial and ethically flawed constructs of the present day Muslim extremism. The endemic notions of superiority among many Muslims facilitate the percolation of similar sentiments to intra-Muslim rivalries.

We are not likely to make much progress on Muslim harmony on a longer-term basis without addressing the role of hate language and incitement as intrinsic direct triggers of violent conflicts along sectarian lines. These messages may be explicit, euphemistic or coded. For example, Shias’ subtle methods for the denigration of religious figures venerated by Sunnis or the religious edicts issued by some top Deobandi clerics, which apostatize Shias only on performance of certain acts. (The extremists use these same decrees by associating the acts of a very small minority of Shias with the entire sect and thus getting themselves a licence to kill them all.) It may be difficult to control such language as its specificity is so low but the use and spread of such language is the case for action for educational interventions, directed at the communities in which it is endemic, and becomes especially critical in the era of hate language and incitement spread by the internet. The burden of proof must be on those who deny their ominous portent.

Intergenerational transmission of hate language and incitement ensures the durability of the demonizing and dehumanizing themes of sectarianism. Which has ensured that after a lull during the colonial period, sectarianism has now again become deeply embedded in the country. Furthermore, repetition creates an environment for desensitizing bystanders, and undermines attempts at showing religious and sectarian tolerance, based on mutual respect for human life and dignity and live-and-let-live. “Our hatred for Shias is in our genes”— a statement from SSP’s Aurangzeb Faruqi testifies to the enduring effects of an environment in which hate language is both embedded and endemic.

Post-Zia generations, fed on a fundamentalist curriculum in the educational institutions, are the ones most vulnerable to the effects of the toxic messages of incitement. Intergenerational transmission of hate messages has led to sectarian themes becoming embedded in everyday political and social culture. We need to understand the effects of incitement of children living in authoritarian societies, tribal settings, and family structures, in patterning their long term attitudes and future susceptibility to becoming suicide bombers. TTP, for instance, explicitly incites children acts of terror, glorified as martyrdom. Many of the other religious establishments, which are considered to be less extreme organizations, generate less explicit incitement but use messages with subtlety which demonize and delegitimize and preachers under their control have used dehumanizing metaphors to incite hatred and instil notions of superiority.

Reporting objectivity for the media is also very difficult in such an environment. Boundaries of journalistic freedom are always under pressure and often subject of intense controversies. Watchdog groups have accused the government agencies of perpetrated violence against journalists. There is a long list of journalists who have been kidnapped, beaten and killed, despite laws in the books guaranteeing basic freedoms. Pakistan is now viewed as the most dangerous country in the world for the journalists.

In conclusion, the perils of neglecting the propagation and spread of religiously sanctioned and politically motivated hate language and incitement in Pakistan are ominous. The foregoing clearly underscores the importance of strict surveillance systems for tracking hate language on the ground, so as to trigger actions directed at those who manufacture and disseminate their toxic messages. Any use of hate message or insinuation in worship places or in other public places must be subject to criminal liability. Preventive approaches have to be population-wide, and directed at removing population-wide exposures to incitement. Strategies which aim to shift the curve to the left need to fully leverage the rule of law and change in education syllabi in promoting positive deviance. The aim is to shift the tolerance curve for the entire population back to the left. It is not enough to restrict attention only to the extremists groups at the right end of frequency distribution. Where there is lack of will or power at the level of the State to defeat and remove those producing the incitement, we are left with the challenge of decades of work to undo the enduring intergenerational effects of their hate language. This takes reshaping of political and social structures and transforming educational information system. In a country where we can’t afford the luxury of decades of change and reform, state and masses alike have to play an active role in weeding out hate from the society. This is Pakistan’s single biggest need at this moment.